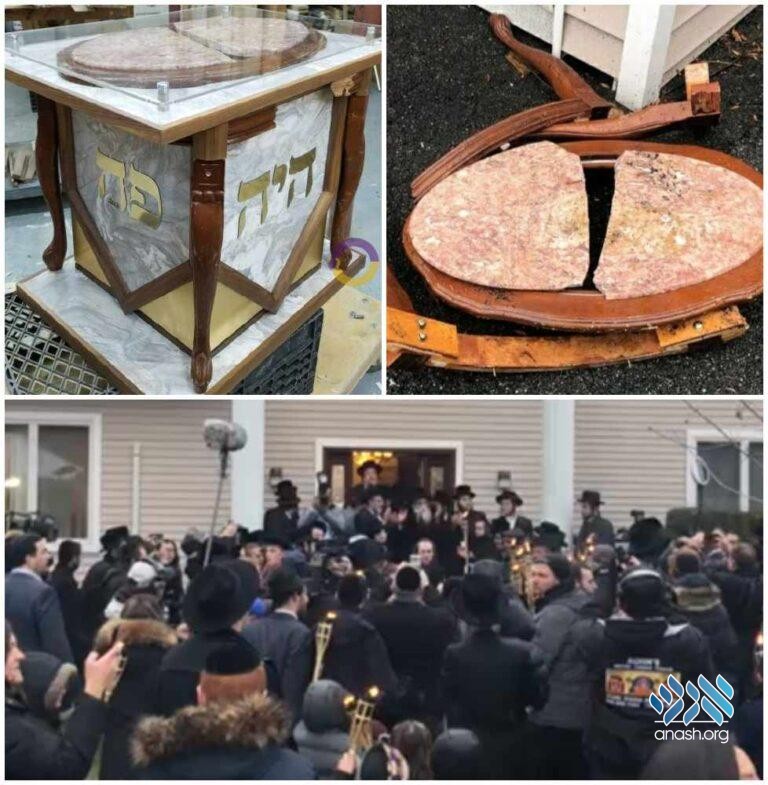 The small coffee table that was thrown at the attacker during a Chanuka celebration last year, was transformed into a Menorah stand replicating a Dreidel, with the inscription ‘Nes Gadol Haya Poh’.

It was a Motzei Shabbos Chanuka at the the residence of the Kossoner Rebbe, Rav Chaim Leibush Rottenberg, in Monsey, NY. Just as Rabbi Rottenberg finished lighting Chanukah candles, a man drove up to the rebbe‘s home, pulled out a machete knife and began stabbing people who were leaving the house to go to a melava malka at the shul next door.

Thinking quickly, Reb Yoseph Gluck, who was standing near the door, threw a small coffee table at the attacker blocking his entrance and thereby preventing much bloodshed. The attacker then tried entering the shul, but was prevented because the door was locked. He then fled in his car.

One year after the attack, the miracles of that evening were memorialized when the small coffee thrown at the attacker was transformed into a Menorah stand replicating a Dreidel, with the inscription ‘Nes Gadol Haya Poh’ emblazoned on its sides.

Rockland County legislator Rabbi Yisroel Kahan, posted a photo of the coffee table and the menorah stand to Twitter on Friday.

Five people were severely injured during the attack. A sixth, Reb Yosef Neumann hy”d, did not recover from his wounds, and passed away 3 months later on 5 Nissan, 5780.