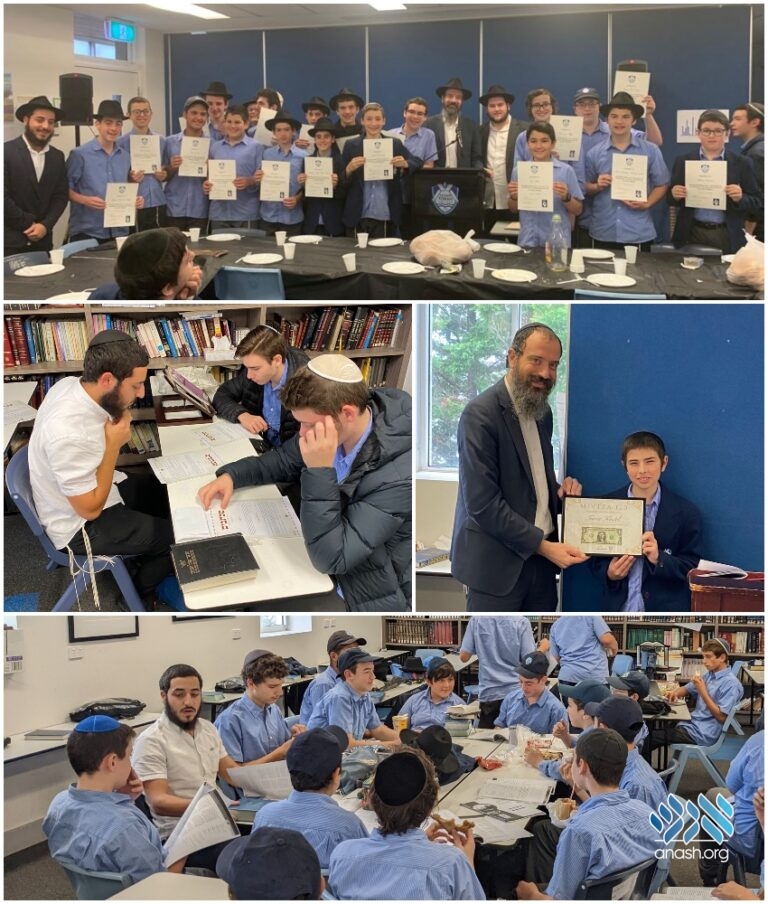 A grand banquet was held to conclude Kesser Torah College Boys High School’s “Mivtza 120” for Yud Alef Nissan, with guest speaker Rabbi Yaakov Lieder who farbrenged with the boys about how they can connect to the Rebbe.

On Thursday 6 Nissan a grand banquet was held to conclude Kesser Torah College Boys High School’s “Mivtza 120” for Yud Alef Nissan. This event also doubled as a ceremony to award those who have participated in this program over the past 7 weeks. The banquet included a full breakfast accompanied by live music and entertainment.

The guest of honor was Rabbi Yaakov Lieder who farbrenged with the boys about how we can connect to the Rebbe and continue to feel his impact many years after Gimmel Tammuz.

The highlight of the event came when Rabbi Lieder presented the finest prize of all – a dollar of the Rebbe that he had personally received over 40 years ago “for peulos in Sydney”. A goral was held, and the winner of the goral was 7th grade Talmid – Tuvia Kastel.

Through this mivtzah, many talmidim strengthened their hiskashrus to the Rebbe in preparation for Yud Alef Nissan.

The mivtzah was comprised of 3 main parts: Talmidim completed a mivtza checklist with various mitzvos like giving daily tzedoka, learning daily chitas, davening maariv with a minyan, saying full korbonos before mincha, attending after school shiurim, going on Friday afternoon mivtzoim and much more! In order to qualify for the grand goral boys needed to reach a total of at least 120 mitzvah points. This was monitored by a detailed Duch system.

26 boys qualified for the goral by achieving over 120 points. As a school – a staggering 13999 mitzvah points were accumulated!

Throughout this period 157 tefillin were also reached on new mivtzoim routes. This in addition to the highly successful purim mivtoim.

The second component of the Mivtzah was the “120 sichos challenge”. The goal was for the school to accumulatively learn 120 sichos during lunchtime breaks. The boys exceeded all expectations and as a group they accumulatively studied a total of 672 sichos during this period. Countless recess and lunchtime breaks were given away for this holy cause.

In the 3rd component – talmidim were challenged with writing essays in honor of the day. Topics included “What the Rebbe means to me”, “Ideas of the Rebbe that changed the world” and “The Rebbe’s Torah”. A number of high-quality entries were received for this and these entries were judged by a panel of teachers.

This mivtzah would never have taken place without the tireless work of the KTC Shluchim, Yanky Super and Mendy Gross who invested many days and late nights to make this a success and give the Rebbe an appropriate gift for Yud Alef Nissan.