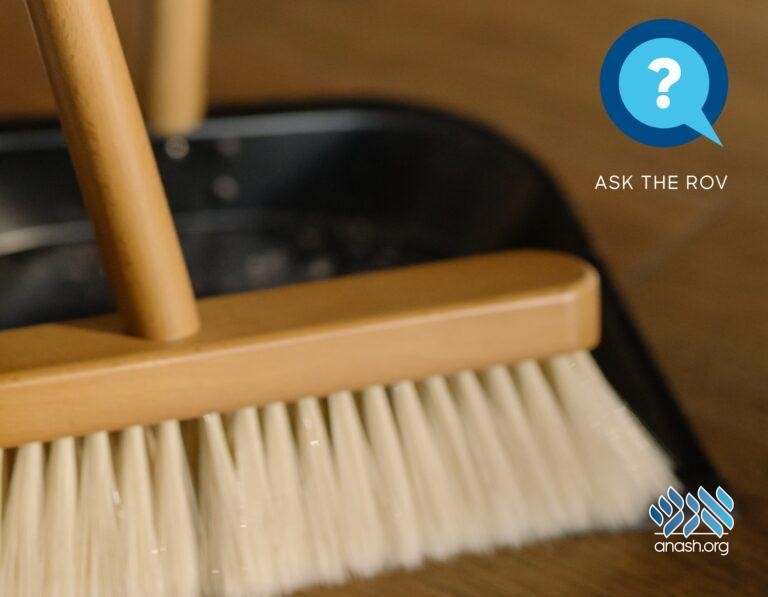 Ask the Rov: May I sweep my kitchen floor on Shabbos and what about sweeping a muktza item?

Chazal placed restrictions on moving certain items on Shabbos in the same manner as during the week, known as muktza. Several reasons are offered: (1) To set apart Shabbos from the weekdays, so that a person won’t busy themselves on Shabbos with organizing and moving around things in their house and not end up “resting;” (2) to forestall carrying these things outside, and although this should apply to all items, such a decree would be too burdensome; (3) so that even those who are unemployed have a recognizable Shabbos “rest.”

The prohibition of handling muktza is specifically in the normal way (i.e. with one’s hands); abnormal manners of handling are permitted (k’lachar yad). Thus, one may move muktza through blowing, or use other parts of one’s body, such as his elbows or feet, and according to the Alter Rebbe, even the back of one’s hands. (This may be done even to protect the muktza.) It is likewise permitted to sit or lean on a muktza item – such as a car – even if this causes the muktza item to move.

Moving muktza with a stick is forbidden since the item one is holding is considered an extension of one’s hand. It is generally permitted to touch muktza with one’s hands if it won’t move, but one may not touch a shaky item since it will probably move. Additionally, it is forbidden to protect a muktza item by covering it with a utensil if this causes it to move, and according to one opinion even if the utensil merely touches the muktza item without moving it (since one’s intent is for the muktza item).

Although sweeping muktza items with a broom is equivalent to moving them with one’s hands, it is nevertheless permitted to sweep away pebbles, nut shells, and other muktza items, since they are considered like a graf shel re’i (a muktza item that poses disgust), which may be moved away to maintain a respectable environment.