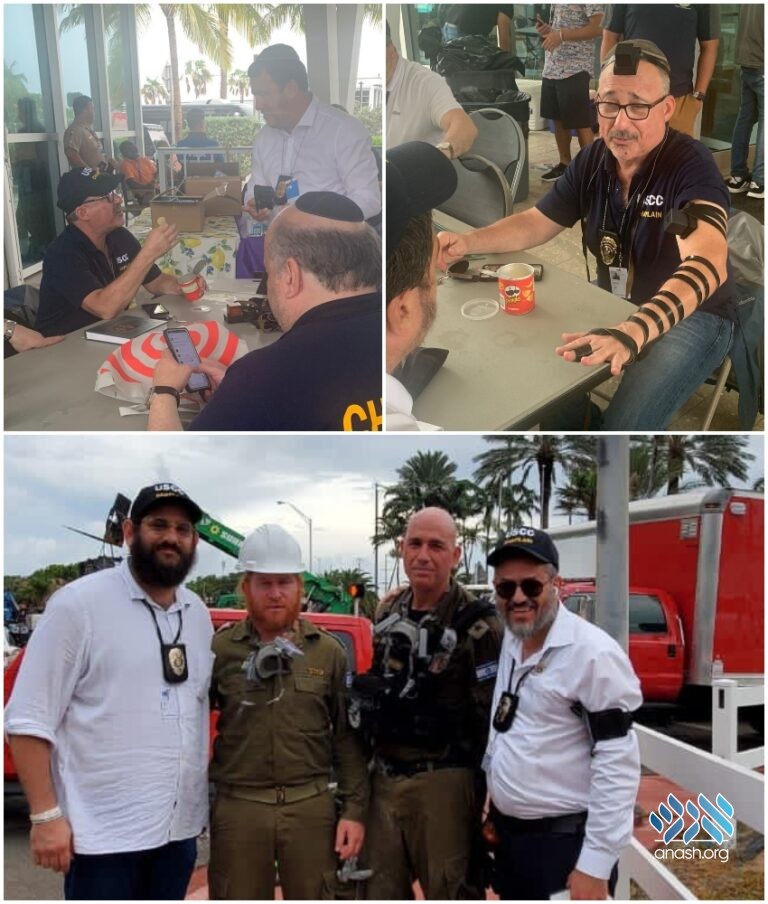 From the Anash.org inbox: Chaplain Mendy Coën shares his reflections on the Surfside disaster, where he witnessed unimaginable pain while leading 31 chaplains in supporting families, rescuers, and first responders.

As we come to the close of the year 5781, we may wonder if the families of the Surfside disaster will be able to get full closure.

This disaster was not just a critical event with mass casualties. It was hell on earth.

I arrived on-site together with the IDF team, and what we were about to witness was unimaginable. A brutal nightmare.

The 12-story building collapsed, that was old news. But the speculation for two full weeks whether its residents were alive or not, this was live burning hell. The raw pain that the families were enduring on a minute-to-minute basis, the breakdown of fathers, mothers, and children waiting for news, any news, was debilitating.

It was surreal. Like watching a movie that would not stop. Several dozen families waiting and hoping to be the recipient of a miracle. The twice-daily official briefings led by the IDF were optimistic. “We believe pockets of air exist under the rubble where people can have survived,” they said, showing diagrams of air pocket possibilities. For 14 days, they gave hope of life to these poor souls, gasping for breaths in between sobs.

Nerves were about to crack. The tension and pain were building. People were breaking down one after the other. Some reacted with hyperactivity, a manic behavior that resembles that of mentally deranged people, while others were stricken with depression and hopelessness. In week two, people had heavy black bags under their eyes from lack of sleep, nervousness, and exasperation.

It’s almost impossible to describe the atmosphere that reigned in these rooms. The raw pain and agony were palpable and deep. We came to wonder what these families had done to deserve such devastating, inhumane existence.

It reminded me of the story of the Exodus. When the Egyptian army drowned in the Red Sea after wanting to battle with the Jewish people, the Torah states (Exodus 14:30) “and Israel saw the Egyptians dead.” Rashi ad loc. brings the Talmud (Psachim 118:b): “the Jews were afraid that the Egyptians were not dead, that they might have escaped the water and its torrents and were still about to attack them. G-d had the water regurgitate the dead bodies of the Egyptian army for all to see.” So, Israel saw their enemy’s dead bodies.

The logic follows that these thousands of bodies were physically visible as a testament to their deaths. Surely their Egyptian families came to claim their loved ones’ bodies and provide burials or rituals. I wondered why this wicked nation of Egypt was given closure, and not the righteous people who perished in the Champlain tower in Surfside?

Why was this iconic Champlain tower chosen by destiny to be destroyed, while so many other buildings on the same Collins Avenue in Miami are so old, fractured, and in worse shape, and they are still proudly standing?

Why is it that, as of this writing, there is no answer to what really made this building collapse? Why so many righteous souls had to depart in their sleep at two in the morning? Why some were able to be buried with the full Halachic holy purification of the body, while others received only 50 percent of their loved ones? Why some received only 30 percent, and why some received only three percent?

Why is it that the medical examiner is left with hundreds of fragments without the ability to identify them with DNA and properly determine who they belong to?

The month of Elul is a month of introspection. The month preparing us for Rosh Hashana and Yom Kippur, the month of accountability and of personal accounting.

For most of us, this month is just another Elul. But for many of us, these last few weeks have been highly challenging, painful, and full of questions without answers. 5781 seems to end sorrowfully broken.

I have been privileged to lead 31 chaplains at the Surfside disaster, helping families, rescuers, and first responders. The task was hard and demanding. I will never forget the experience of being there for the IDF when they had to break down on our shoulders (the chaplains debriefed one-on-one twice a day, during which we cried to regain strength to continue).

In this nightmare, there was a breakthrough. As many families and the Miami-Dade Police Department would testify later, without the emotional support, critical stress management, Psychological First Aid, debriefings provided by the chaplains, and the help of other agencies, the families would not have survived this ordeal. The shoulders provided to lean on, to cry on, to yell on, to sleep on, or just to feel on, were the reason these families were able to withstand four weeks of tortured anguish.

This is the only positive that this event can bring us. To know with absolute resolve that when challenge comes, when the wave of tribulation of life arrives, G-d forbid, the only way to withstand it is by relying on the help of others. As The famous Talmudic statement says (Brachot 5:b) , “Ein chavush matir et atzmo,” The imprisoned cannot free himself. The idea of needing someone outside oneself is divine. We should open up to the help of others when we need it. Many of us refuse to be helped and thereby prolonging our own suffering.

But without helpers, no help can be given.

Here is a call to action: make yourself available to help others, whether with your money, your action or your speech by sharing your mind and heart.

The Talmud says (Sanhendrin 98:2), “Harotze leinatzel mechevle moshiach…yaasok begmilut chasadim.” He who wants to be saved from the agony (that precedes the coming) of Moshiach, should invest himself/herself in providing kindness.

We live in a fractured world. Our community suffers from many collapses; the worlds of education, marriage, finances, social and family often contain emotional and psychological rifts. There is not one family who is not experiencing a painful breakdown, G-d forbid.

This is the lesson of the Champlain towers. An everlasting legacy.

Through Gemilut Chasadim, acts of kindness toward those around us, we can beat any breakdowns, we can create opportunities and breakthroughs. And certainly, by doing so united, we can create the biggest breakthrough of our history, the breakthrough of Moshiach, promised in our holy Torah: (Isaiah 25:8): Bila hamavet lanetzach, umacha Hashem Elokim dima me-al kol panim – Death will be Eliminated forever and G-d will wipe the tears from every face.”

Chaplain Mendy Coën is the director-general of the United States Chaplain Corps. www.uschaplaincorps.us. He can be reached at [email protected]