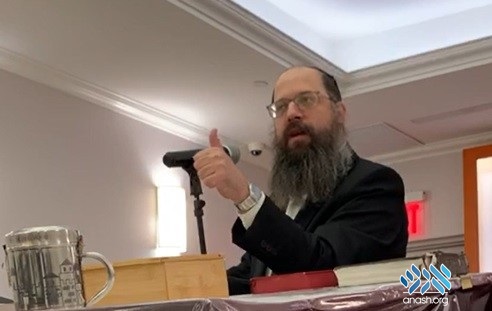 Rabbi Chaim Shapiro, Menahel of Yeshiva Tomchei Tmimim in Morristown, New Jersey, presented a shiur to participants of the kollel.

The kollel was founded 3 years ago and later named in honor of Rabbi Mordechai Tzvi Greenwald OBM, a beloved educator from Kfar Chabad, by his grandson, Rabbi Shloimy Greenwald of Crown Heights. Sunday’s kollel marked his first yahrtzeit.

The Kollel takes place every Sunday at Bais Gimpel Chaim, 309 New York Avenue, and begins at 8:15 am with Shacharis, followed by a hot breakfast. Then followed by Chavrusa learning at 9 am, and then a shiur at 10 am.  A hot lavish breakfast is served and free Chayenu and Dvar Malchus booklets are distributed to attendees.