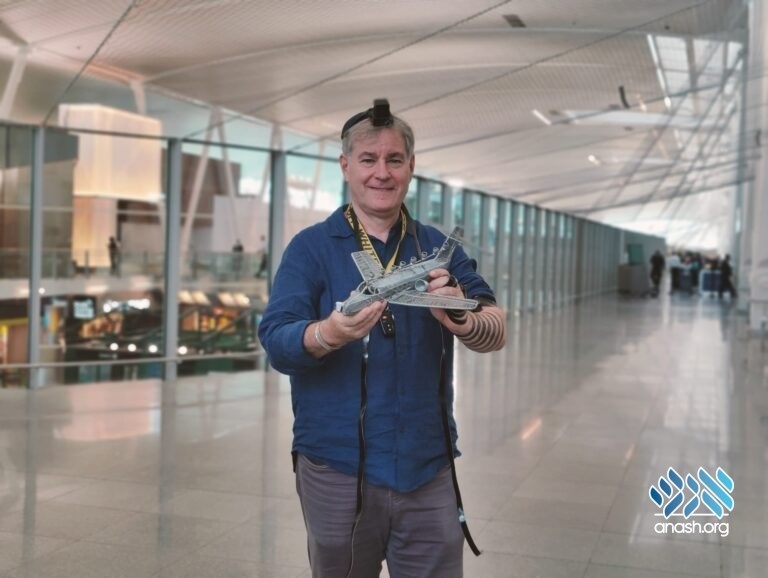 When Rabbi Yossi Rapp of Chabad Air received a model airplane with a Menorah on top as a gift from a friend, he didn’t expect that it would lead to a Bar Mitzva for a middle-aged Jew.

Recently, Rabbi Yossi Rapp, Director of Chabad at the Airport received a call from a close friend, who told him that he has a surprise present for him; a model airplane with a Menorah on top.

After taking possession of the gift, he inquired with his friend about the origin of the menorah. The response came that he got it from G-d. Explaining that one day it randomly showed up at a party he was hosting and he had no idea how it got there.

Not knowing what he was supposed to do with a menora in the middle of the summer, he decided to take it to his stand at the airport, and perhaps it would come to good use sometime in the future.

“One day, as I’m walking into the elevator near the terminal,” Rabbi Rapp says, “a man hops on and comments that he liked the airplane he is holding. So I ask him do you know what was on top and he responds that it was a Menorah. So I ask him, How do you know what a Menorah is? He tells me that he is Jewish and lives in Connecticut.”

Next thing and Rabbi Rapp is giving him a tour of the Shul at the airport where he asks him if he has ever put on Tefillin. The man said that he has never done it in his life.

So on the spot, he made him a Bar Mitzvah and put on Tefillin for the first time in his life. Thanks to the airplane that was given to us from G-d.