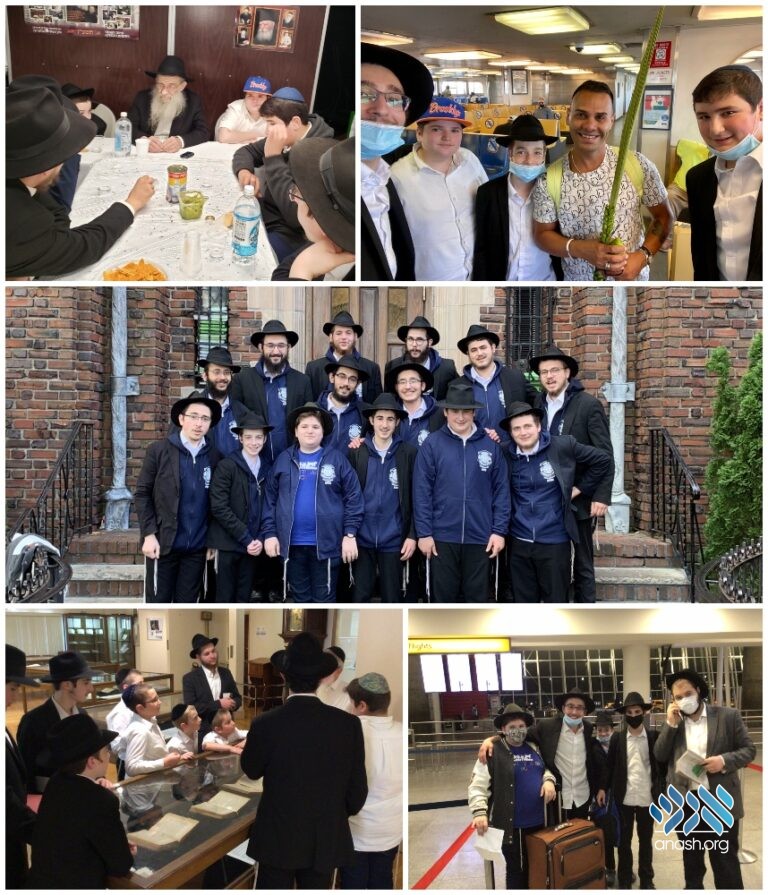 A group of CGI UK campers who had never experienced Tishrei in Crown Heights were given the trip of a lifetime by the staff of the camp, complete with visits to the Ohel, the Rebbe’s home and library, and hakafos in 770.

Every summer camp prides itself on its dedicated staff. This year, Camp Gan Yisroel UK took that to the next level.

There was nothing out of the ordinary about the thousands of guests who converged upon Crown Heights over the past month to spend Tishrei with the Rebbe. After all, that happens every year.

What was remarkable this year was the small group of young bochurim who arrived for the last days of Sukkos from the United Kingdom. These boys had never had the opportunity to visit 770 being part of such an authentic chassidishe experience. It was solely the atmosphere in camp, and the bond that their staff kept up with them even after camp, that inspired them to make the trip. Many more campers wanted to come, and really tried, but a few lucky ones were able to represent the rest, who are anticipating taking part in next year’s trip.

For weeks prior, a group of truly dedicated and talented CGI UK staff members (who are currently learning in Crown Heights), overseen by the camp mashpia Rabbi Folly Dubov, worked tirelessly to coordinate this one-of-a-kind CGI UK trip to Tishrei by the Rebbe.

When the campers arrived on Thursday, the first day of Chol Hamoed, they were greeted by a welcoming committee and whisked right off to Crown Heights for a week of excitement, experiences and inspiration – a week by our Rebbe.

Thanks to the meticulous coordination of the program and the hardworking staff, everything was put in place to ensure the most enriching experience possible, physically and spiritually. Pleasant accommodations, nutritious meals (plus a sampling of Crown Heights’ culinary scene, of course) and a jam-packed round-the-clock schedule with constant supervision.

The boys began each day with learning Chassidus, together with mezonos and drinks, as a preparation to davening, followed by an elaborate breakfast. They then set out on Mivtzoim, on the Staten Island Ferry, by the Trump Tower, the UN and other such venues.

They also utilized the unique opportunity to visit holy places such as the Ohel, the Rebbe’s house, the Rebbe’s library – with a guided tour by Chief Librarian Rabbi Berel Levin, plus a full detailed tour of the entire 770.

At the end of each day, the boys spent the night participating in Chassidishe farbrengens with prominent mashpi’im from Chabad yeshivos, including Rabbi Yisrolik Segal from Brunoy, France, Rabbi Yisroel Noach Lipskier from Queens, plus exclusive farbrengens with Rabbi Nachman Schapiro, Rabbi Folly Dubov, Rabbi Mendy Wolf, founder of YJL NYC, among others. When the farbrengens were over, they took to the streets of Crown Heights to dance by Simchas Beis Hashoeva according to the Rebbe’s directive.

And of course, the climax of the trip was experiencing hakafos in 770 on Simchas Torah, in the electrified atmosphere of 770, with thousands of Chassidim singing and dancing around them. After hakafos, the bochurim went in line to have a chance to kiss the Rebbe’s personal Sefer Torah.

“Organizing this trip was way harder than I had ever dreamt,” remarked a counselor. “It took over my whole Tishrei, but seeing the tremendous hatzlacha, how much the chevra enjoyed it and how meaningful it was for them, made it all worth it.”

Campers in the past have expressed that Tishrei by the Rebbe fundamentally changed their outlook and attitude towards Yiddishkeit, Chassidishkeit and Hiskashrus to the Rebbe, and has actively influenced their life through Mesivta and beyond, with life-changing hachlatos till today. We hope to continue and expand in years to come.

Camp Gan Yisroel UK would like to thank the following individuals for making this special ‘Tishrei By the Rebbe’ program possible:

Rabbi Yoav Ben-Yoav, Mr David Gomerson, The Goldstein family – for graciously providing accommodations for the bochurim throughout their stay.

The following families for hosting meals:

The dedicated staff of CGI UK: