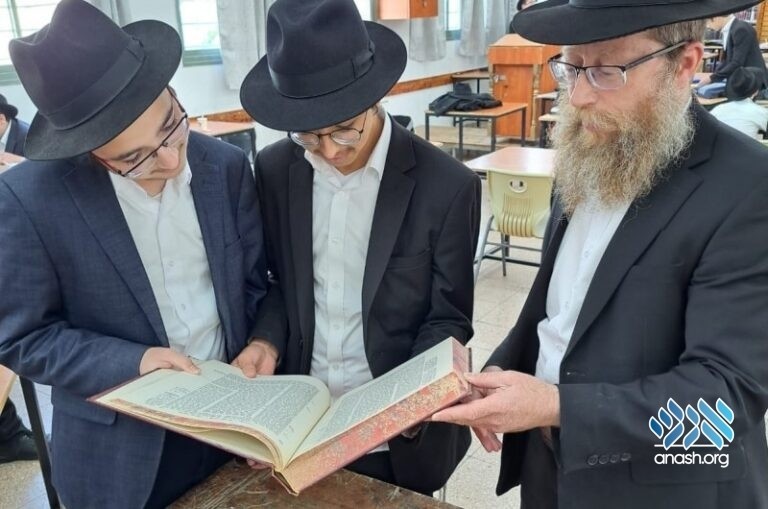 Two Chabad Yeshiva bochurim who found $1,000 cash in a donated volume of Gemara, tracked down the original owner and returned the money. A few days later they received the money back from a complete stranger.

Rabbi Moshe Heber, a Maggid Shiur at Tomchei Temimim in Kiryat Gat, is used to being asked challenging questions in Gemara. But recently, two bochurim approached him with a difficult question about a Gemara.

“We found thousand dollars in an old Gemara donated to the yeshiva. What is the proper thing to do?” they asked him.

The first clue appeared on the opening page; the name Eliaz Beer-Sheva.

Rabbi Heber then asked colleagues if any of them knew where the Gemara came from. One of them recalled that he had received an old set of Shas from a resident of the Lehavim village, who wanted to donate it to a place where it would be used.

After a bit of research, Rabbi Heber was able to obtain the man’s phone number and gave him a call. When he asked the man if he once hid a thousand dollars in one of the volumes, he replied “In the past, I used to keep money between the pages of the Gemara, but I do not remember losing that amount.”

Rabbi Heber now returned to the students with the new information he had obtained. He told them that in such a case it can be debated whether there is an obligation of Hashavas Aveida, but recommended that they go beyond the letter of that law and return the money to its owner.

The two bochurim, Levi Ben-Maas and Mendy Solomon, said they would be happy to do so, and soon enough, Rabbi Heber and the two bochurim stood at the entrance to Eliaz’s house in Lehavim.

“The man received us very warmly,” says Rabbi Heber, “he offered to put on a yarmulka in our honor, and we told him to act as he saw fit.”

The meeting lasted more than an hour and a half, during which the three of them told the story of his life.

He was born in late 1939 in Kaunas, Lithuania. His father, Rabbi Eliezer Levin, was murdered immediately after the Nazi occupation. His mother, Hadassah, wandered with him in the ghettos, and inevitably placed him with nuns in a convent.

After the war his mother came out of hiding, exhausted and weak, and demanded to have her son returned to her. The nuns refused. His mother fought until she managed to rescue him.

She wanted to immigrate to Eretz Yisroel with her son, but her strength did not stand up to her and she died shortly after.

“Mr. Eliaz described to us the ‘Shema Yisrael’ he said with his mother in her last moments,” says Rabbi Heber excitedly. “His mother wrote a chilling diary during the Holocaust, and her son published it posthumously.”

The orphaned boy immigrated to Eretz Yisroel as part of the youth aliyah and began a new life. He served as a senior legal adviser and was even appointed a judge in the Magistrates’ Court.

“After listening to his moving story, we offered him to put on tefillin and he happily agreed,” Rabbi Heber shared. “His davening was very moving, it was like Yom Kippur. As he davened, his granddaughters entered the house and asked what his about. Their grandmother told them about tefillin, and it was obvious that the whole thing made her happy. “

The visit ended with the bochurim returning the money to the retired judge, and he thanked them from the bottom of his heart.

Mr. Eliaz later told Sichat Hashavua that after immigrating to Eretz Yisroel, he studied at the Institute for Holocaust Survivors in Jerusalem and later at Yavneh and Kfar Haroeh.

“Around the time, I bought a set of Talmud Bavli,” Eliaz says. “I saved up some money and hid it in the Gemara. Years later, when Rabbi Even-Israel (Steinsaltz)’s series came out, I purchased it, and asked the Chabad rabbi to transfer the previous Shas to where they would study.”

“I was surprised by the phone call I received from the yeshiva in Kiryat Gat. I met the kind rabbi and his two students, and we talked about Torah and tradition in a warm conversation. They could certainly have kept the money, and as I understand it, they went beyond the letter of that law, and I and deeply grateful for that.”

The story took an interesting turn the following Shabbos when the father of one of the students shared the story publicly to members of his community.

On Motzei Shabbos, a guest visiting the town knocked on the family’s door. He said he was so moved by the story that he decided to give a gift to both students: $1,000 – the exact amount that they returned.