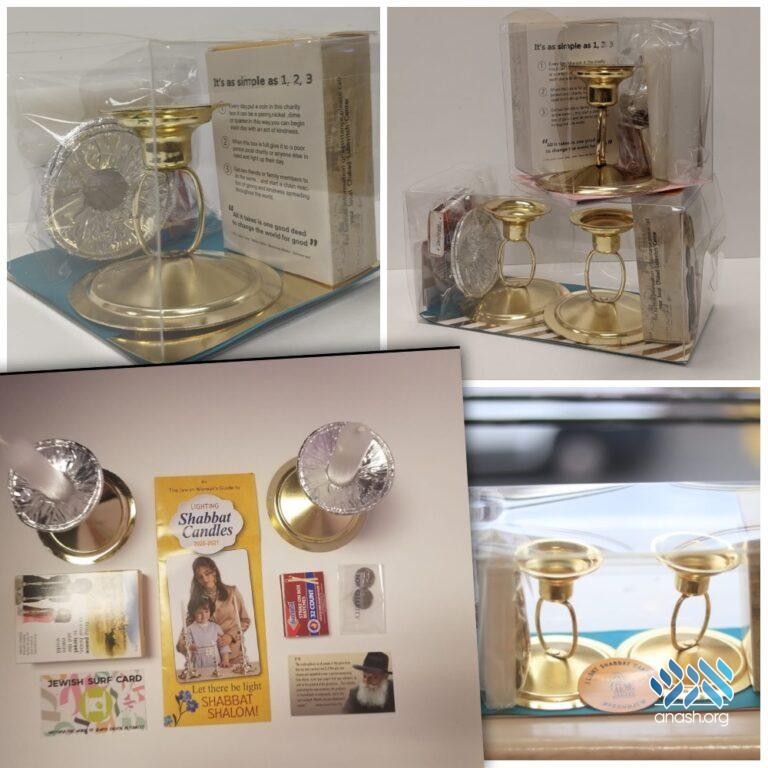 The two girls put together Neshek Gift Boxes, featuring the candlesticks that the Rebbe had designed, Tzedakah, an instruction guide to lighting candles, a Pushka, and they are making it available for everyone.

In the year 1974  (5734), the Rebbe started Mivtzah Neshek, campaigning that all Jewish women and girls from the age of three, should light Shabbos candles. This would ensure that each Friday, more light would be brought into the world. People all over wanted to be a part of this widespread force of good.

A producer of metal articles decided to offer a candlestick that he would manufacture at a wholesale price. He designed a candleholder that he considered modern art. However, when a sample of this candlestick was shown to the Rebbe, The Rebbe said not to use it because it wasn’t sturdy enough. The manufacturer was unsure of what kind of design to create, so he made five different prototypes. The Rebbe was not satisfied with any of them as they were, but said to use the cup from one of the samples, the middle ring from a second, and the base of the widest, making it stable. A new candlestick was created according to the Rebbe’s design.

Upon the Rebbe’s request, these candlesticks were distributed to schools. Each one had a sticker underneath it for the girl to write her name and the name of her school on it.

When Mushka and Malky, two high school students, heard this story, they wanted to do something about it.

They thought, “Hundreds of Lubavitch girls go on Mivtzoyim each week, giving out tealights for Jewish women and girls to light. While tealights are practical, they only last one week. But candlesticks can be used to light every week. Besides, Mivtzah Neshek has to be more grand!”

The two girls decided that it was time to make the candlesticks that the Rebbe had designed available and accessible for everyone to take along on Mivtzoyim, free of charge.

They raised money, and ordered boxes, candlesticks and supplies.

Then, they put together “Neshek Gift Boxes,” featuring the candlesticks that the Rebbe had designed. They included candles, Tzedakah, an instruction guide to lighting candles, a Pushka, and much more.

They offered a choice of one or two candlesticks per box, and the option of a written guide in English or Russian.

They began by buying the supplies for 50 boxes, but realized immediately that this would not be enough. The boxes were in high demand and going fast. Teachers wanted them for Hebrew School, others wanted them for Mivtzoyim, as  gifts, or for anyone that they knew.

The girls raised money and ordered supplies for a few hundred more boxes, and now this inventory too, has been quickly distributed.

In order to keep up with the demand, Mushka and Malky are turning to you, to help them to keep this project going and to ensure that the Rebbe’s candlesticks can continue to be made accessible to all. Because these gift boxes are free of charge, they need to raise funds to keep creating them.

we welcome you to become a partner in this special Mivtzah. Please join us! All it takes is just $5 to help another Jewish home light from week to week.

Be a part of this initiative that’s is so dear to our Rebbe, let’s conquer the world with light, one Neshama at a time!

Donate today via:
PayPal to: @neshekgiftbox cashapp: $NeshekGiftBoxes
Boxes are available free of charge at the Mivtzoim Shop: 1-845-393-1951.