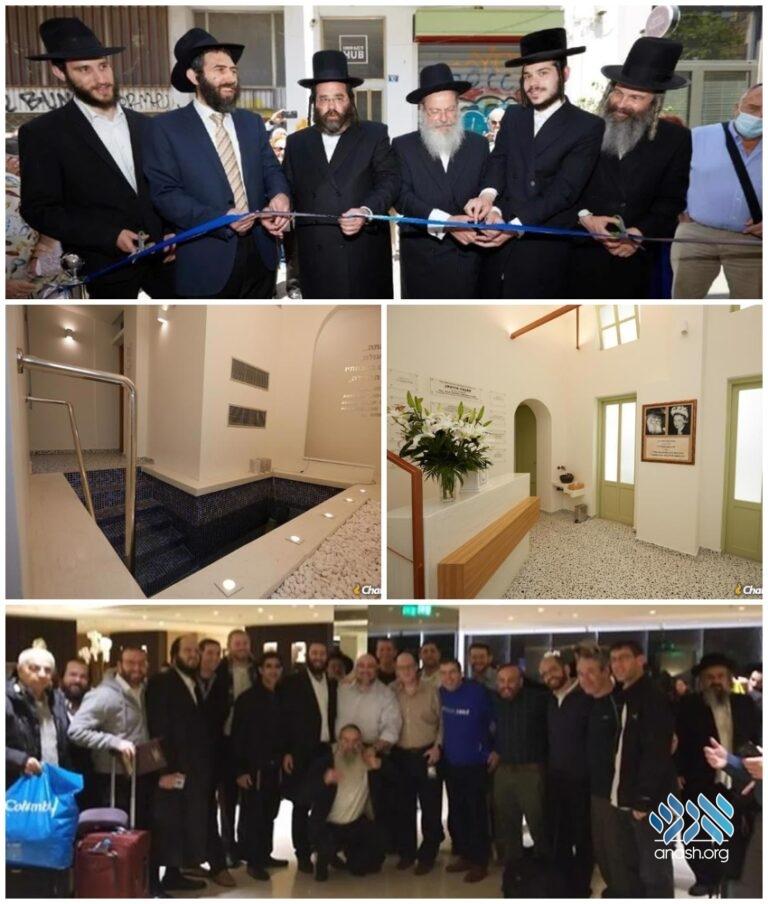 A group of passengers whose El Al flight from New York to Israel was forced to land in Athens, Greece for Shabbos, thanked their Shluchim hosts by sponsoring a new state-of-the-art Mikva.

With only a few hours’ notice on a Friday in November 2018, 150 anxious Sabbath-observant Jewish passengers on a delayed Tel Aviv-bound El Al flight from New York walked into a hotel near Athens International Airport to find that it had been fully prepared for Shabbat, with catered meals, a prayer hall and everything the observant guests needed for the next 25 hours.

The last-minute preparations were arranged by Rabbi Mendel and Nechama Hendel, co-directors of Chabad-Lubavitch of Athens, Greece, who scrambled from a standing start at 11 a.m. to prepare for the last-minute guests, whose plane was rerouted when it couldn’t make it to Israel before sundown on Friday.

The 150 strangers—now bonded by their collective wish to not desecrate the Shabbat by flying—thought they couldn’t thank Chabad and the Hendel family enough. But this week they did: On May 22, the Hendels dedicated the only mikvah in central Athens, in part thanks to the generosity of the grateful passengers of Flight #LY02.

The Hendels are accustomed to hosting up to hundreds of Shabbat guests each week, and enjoy the relationships they form with travelers from around the world.

Several months earlier, a Chassidic group visiting from the Williamsburg neighborhood of Brooklyn, N.Y., discovered that central Athens had no mikvah. Hours after Shabbat, the travelers contributed a significant sum towards the building of a mikvah.

When some members of the stranded group heard that there were plans for a mikvah underway but insufficient funds to complete the project, they decided to do something about it. During the Torah reading on Shabbat at their hotel-turned-synagogue, one passenger, Rabbi David Derli of Tiberias, rose with an impassioned announcement: “I wasn’t even supposed to be on this flight,” he told the crowd. “I booked the ticket at the last minute. But everything that happens is part of G‑d’s plan, and there’s a reason we’re all here. I found out that Chabad is in the midst of building a mikvah in central Athens, and as gratitude for their incredible hachnasat orchim [hosting guests], I would like to suggest that everyone here participates in this project as much as they can.”

A sprawling city of more than 3 million people, Athens is home to 2,500 Jews—some of whom descend from the Romaniote Jews living in Greece for centuries and have unique Jewish traditions that are neither Sephardic or Ashkenazic, while others came from Spain after the expulsion in 1492. The city has been served by Chabad-Lubavitch since 2001, when the Hendels moved there from Israel. In the years since, they established another Chabad center in the suburbs, as well as satellite branches in Thessaloniki and Rhodes. In addition to Chabad’s kosher restaurant, they send catered meals all over the country and have a kosher grocery on-site.

In recent years, Greece has been plagued by economic woes and recession. That meant that Chabad was discreetly providing food packages to several dozen struggling households and hosting more community members than before at communal holiday meals.

“It isn’t always easy living in Athens,” Hendel told Chabad.org. “The spread out cityscape makes it difficult to bring people together and made mikvah observance challenging—the only mikvah was in the suburbs, making Shabbat mikvah visits impossible.” Securing funding for the mikvah meant support from several overseas foundations—Keren HaMikvaot, the Rabbinical Center of Europe and the Meromim Foundation—as well as private donors.

“People were inspired to see the Jewish unity—that Jews from America that will perhaps never use the Athens mikvah found it important to help and create our mikvah,” says Nechama Hendel.

Though mikvah is at the cornerstone of Jewish life, its observance is often overlooked or misunderstood, notes Nechama Hendel, who’s been on a campaign to educate the community about its significance. Sofi Bati, an Athens local, says she was delighted to learn more about this mitzvah: “It’s so great to discover that a mikvah can be so beautiful, modern and accessible.”