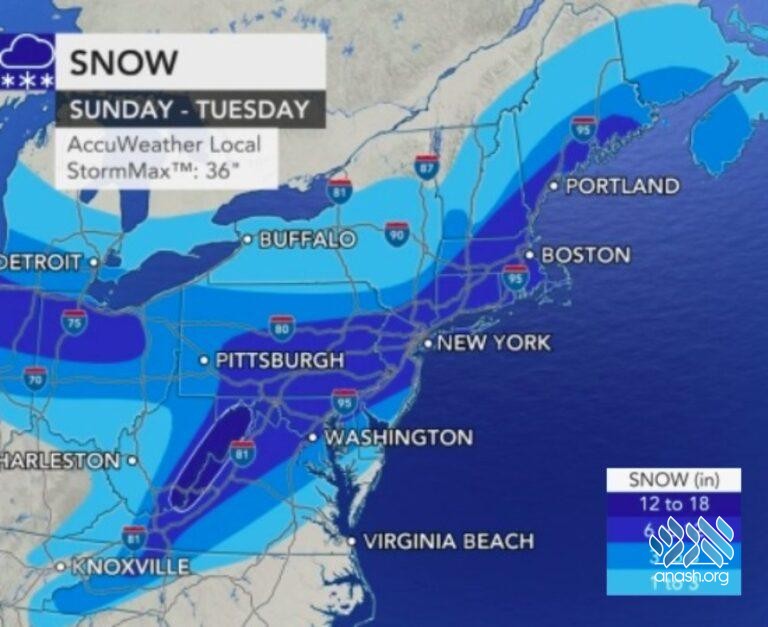 New York City and surrounding areas could see upwards of 10 inches of snow as a winter storm descends on the Tri-State after this weekend’s bitter cold.

New York City and surrounding areas could see upwards of 10 inches of snow as a winter storm descends on the Tri-State after this weekend’s bitter cold.

While much of the area could get 6 to 10 inches, suburbs to the north and west may see over a foot. Snow could mix with rain and sleet along the coast, pushing down totals there, according to AccuWeather.

The cold weather sets the stage for the snow, which is forecast to arrive in the city on Sunday evening and continue at varying intensity into Monday, when the high will be 34. It’s expected to be a wet snow that’s more difficult to shovel.

Winds increase Monday into Monday night as the storm continues. Gusts could reach 40 to 50 mph, and there’s a potential for near-blizzard conditions amid the heavy snow and wind.

The storm tapers down to flurries on Tuesday, but travel on roadways could be dangerous throughout the day Monday into Tuesday. There’s also a chance of power outages.

A winter storm watch will be in effect for a swath of the Tri-State from Sunday night into Tuesday.

The watch covers all of New York City, as well as most of Long Island, the lower Hudson Valley, northern New Jersey and southwestern Connecticut. A winter storm warning was also issued for much of New Jersey on Saturday.

“Another storm system is set to impact New York with potentially heavy snow, strong winds and possibly coastal flooding downstate,” Cuomo said in a statement. “I have directed state agencies to prepare all emergency response assets and they stand ready to assist any of our local partners who may need help in the coming days. We will also be closely watching the response of utility companies to ensure any power outages are addressed immediately. In the meantime, I am urging all New Yorkers to pay close attention to their local forecasts and to begin preparing their households for this latest round of winter weather.”

After the storm passes, Wednesday is forecast to be partly sunny. Temperatures are expected to reach the low 40s by Thursday.