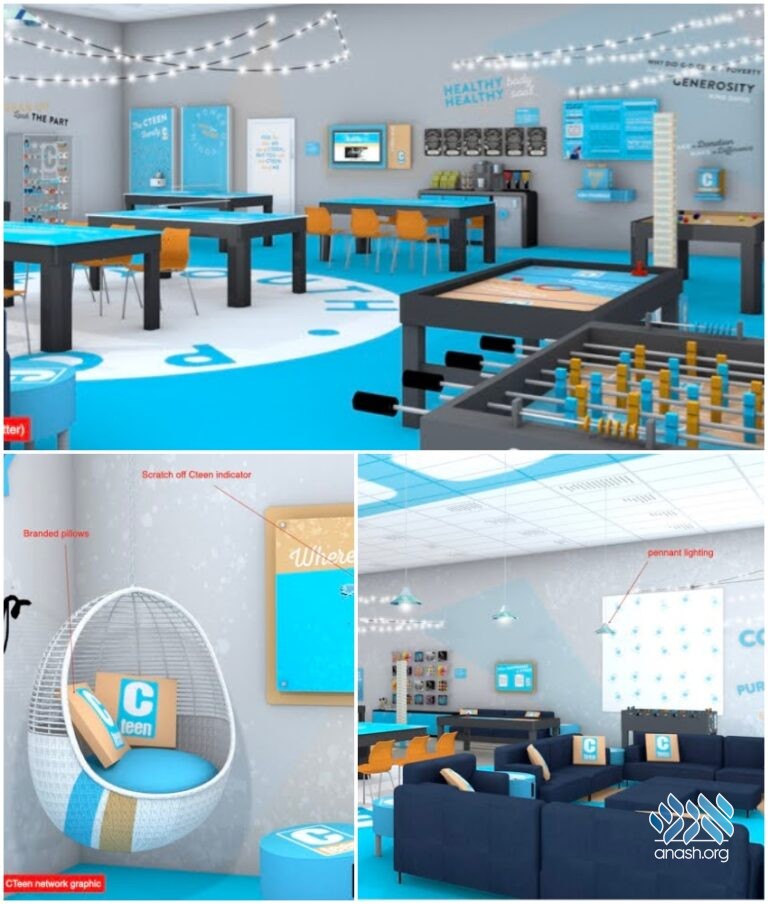 CTeen HQ has announced a grant for state-of-the-art CTeen lounges. offering Six CTeen chapters the opportunity to build or renovate their lounges, creating a space where they can engage their Jewish teenagers.

Something new is coming to CTeen at the onset of the new year. The CTeen HQ has announced a grant for six state-of-the-art CTeen lounges. Six CTeen chapters will be afforded the opportunity to build or renovate their lounges, creating a space where they can engage their Jewish teenagers.

As of yet, over 50 Shluchim already enjoy their very own CTeen lounges, but many of them are homespun and past their prime. The six new lounges will boast state-of-the-art features and visually appealing Judaism. Such features will include immersive displays exhibiting the 10 Mivtzoim campaigns, engaging wall art expressing messages of Torah and Chassidus, floating tefillin shelves, a Jewish-themed rock climbing wall, and much more. These lounges will be the perfect synthesis of Judaism and recreation, allowing Jewish teens to grow in a happy, healthy, and Jewish environment.

With the help of generous donors, CTeen has partnered with Apple Rock Inc, one of the fastest-growing display companies in the country. Apple Rock will oversee the entire demolition and installation process within each one of the six chapters. The qualifying factors for this grant will be based on the extent to which the Shluchim engage their teens, how often they facilitate programs and what opportunities they offer their teens. CTeen Headquarters hopes to choose the six fortunate Shluchim by the end of Tishrei and begin building as soon as possible.

“These lounges really exemplify the idea that all technology and modern advances are meant to be used to spread Yiddishkeit,” explained Rabbi Mendy Kotlarsky, vice chairman of CTeen and executive director of Merkos 302, “We intentionally designed them to be both an educational and fun experience for the teens.”

This novel concept is the first of its kind amongst all Jewish youth organizations. The Rebbe often spoke about the positive effect an environment can have on a person’s spiritual and religious psyche, especially Jewish youth. Accordingly, this is an opportunity that should not be missed. Make your teen’s dreams a reality!

To apply for the grant or to learn more, visit https://www.cteen.com/remodel.