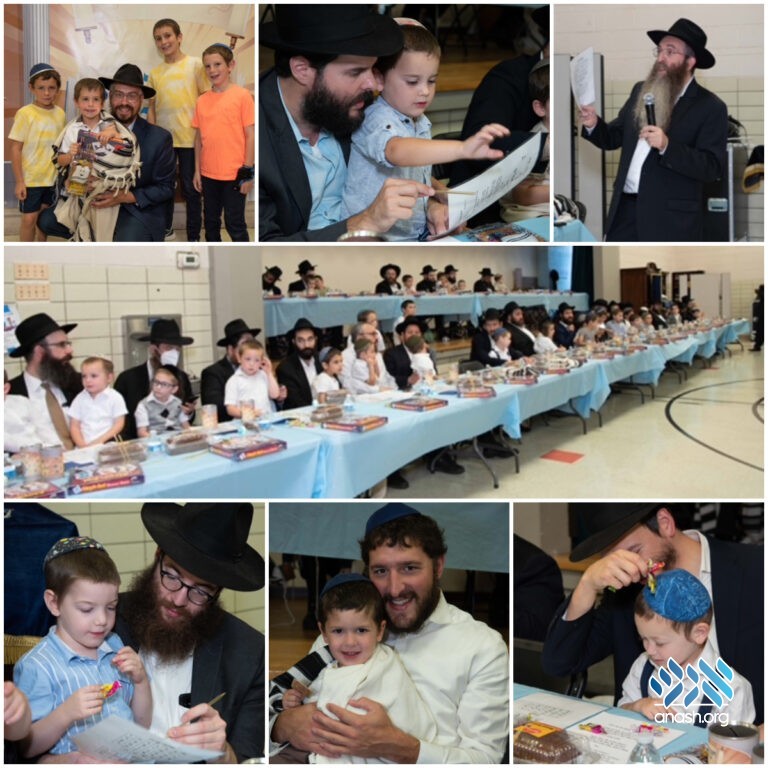 Dozens of families proudly celebrated the hachnasah lecheder of their 3- and 4-year-old sons in a group ceremony in Chicago this week, after having missed the opportunity last year due to Covid.

It’s a custom that dates back at least to 11th century France. Young boys about to begin their formal Jewish education read and then lick honey off Hebrew letters, teaching them from the youngest age that Torah is sweet, like honey.

Known in Hebrew as hachnasah lecheder (“entering the classroom”) and in Yiddish as areinfirenish, the ceremony involves parading the young boy to school wrapped in a tallit.

According to the 11th century Machzor Vitry, written by Rabbi Simcha ben Shmuel, a student of Rashi, it is a reenactment of the revelation at Sinai, where the Jewish nation was introduced to Torah study.

Traditionally held shortly after a boy’s third birthday or before he begins school, the ceremony has been all but impossible during the past year and a half when schools were either closed entirely or strictly restricted to students and staff.

With a backlog of 3- and 4-year-olds who had missed out on the rite of passage, Rabbi Pinchus Turk, first-grade teacher at Seymour J. Abrams Cheder Lubavitch Hebrew Day School in Skokie, Ill., a suburb just north of Chicago, recently arranged a mass areinfirenish for 39 boys.

The celebrants came from hundreds of miles around, hailing from as far east as South Bend, Indiana, and as far west as Rockford, Ill.

The traditional ceremony includes painstakingly prepared props, such as a honey cake carefully engraved with a Hebrew passage as well as an egg upon which another passage is written.

To prepare for the event, the rabbi, along with his wife Nechama Dina Turk, went high tech.

With the help of a neighbor, software engineer Ze’ev Shkolnikov, the Turks designed a cake mold which they had 3D printed at the Chicago Public Library, as well as a customized rubber stamp, which they used with food-grade blue ink to inscribe the hard-boiled eggs.

As for honey, they used snappy honey sticks, as opposed to drippy jars or squeeze bottles.

On the morning of Aug. 29, the children were carried into the school building by their parents, each one wrapped and cradled in a tallit.

After stopping for a family picture at the photo booth, the children settled in on their father’s laps on the stage of the school auditorium.

Parents, siblings, grandparents, and aunts and uncles cheered and clapped as Rabbi Turk welcomed them to the event and then proceeded to call out the Hebrew letter, first from aleph to tav, and then reversing from tav to aleph, as the father-and-son teams followed along with their honey sticks.

After the final letter rang out, the honey was smeared on a tablet (in this case, a laminated page) upon which the Aleph-Bet is printed and the boys eagerly licked it up, relishing the sweetness of Torah.

After reading aloud from their honey cakes and eggs, the boys partook of their inscribed treats before candies were rained down on their heads, further impressing on them the idea that Torah study comes with unexpected sweet dividends.

Even though the mass event was the result of a pandemic (Rabbi Turk would previously hold the event for each child individually), the group ceremony is here to stay.

“It was special sitting up there with so many families, each one celebrating the same special milestone,” says Shkolnikov, who participated with his four-year-old son, Levi Yitzchak. “Together, we are forming another link in the unbreakable chain that traces back to Sinai and will continue long into the future.”