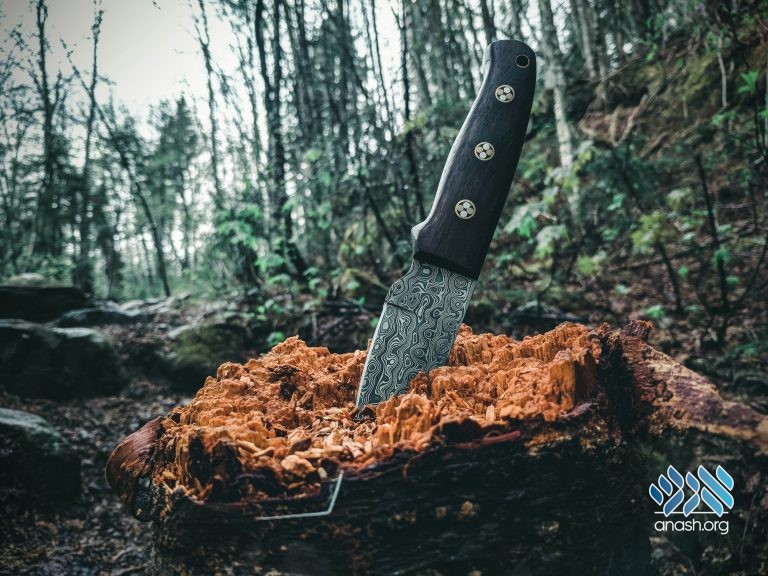 Halacha in the Parsha: If a knife was used for non-kosher food, one needs to kasher it before using it again. What are the different methods of kashering a knife?

By Rabbi Aryeh Citron for Anash.org

Since the Torah portion discusses kashering, this weeks article will discuss how to kasher knives.

Here are the various methods for kashering knives, when they are necessary and what they work for.

A knife that was used when grilling a non kosher food on a Barbecue should be kashered directly in the heat of fire.

If one has a knife that has absorbed a non-kosher flavor through heat (e.g., it was used to cut a hot non-kosher food), it must be kashered by immersion in boiling water (see Yoreh De’ah 121:7). Before doing this, one must clean the knife to make sure there is no food residue on it. This is especially important in the area where the blade connects with the handle.

The Pri Chadash (10:7) explains that this method of kashering is necessary for knives as they are used with pressure and the grime they accumulate is difficult to clean with standard cleaning methods.

A knife used once mistakenly for a cold non-kosher food (or dairy instead of meat or vice versa) can be kashered by simply washing it well with water (Hilchot Bassar BeChalav, pg. 435).

Using with Cold Foods on a Temporary Basis

If one has a knife that absorbed a non kosher flavor through heat, one can use the “plunging in earth” method  to kasher it for temporary use with cold foods. One should not use it on a permanent basis however, without kashering it with boiling water as this can lead to mistakenly using it with hot food.

Some say that such a knife may even be used to cut sharp foods (on a temporary basis). Others say that for use with sharp foods one must kasher it fully in boiling water.

This argument is based on the following story (in Avodah Zarah ibid):

Mar Yehuda (an important personage of the house of the Exilarch) and Bati bar Tuvi (a wealthy man) were once sitting before King Shapur of Persia. The king’s servants brought an etrog before them. The king cut a slice and ate it, and then he cut a slice and gave it to Bati bar Tuvi. He then stuck the knife ten times in the ground, cut a slice and gave it to Mar Yehuda. (Evidently this king was well versed in Jewish law.) Bati bar Tuvi said to him: “And is that man [referring to himself] not Jewish?” King Shapur said to him: “I am certain of that master (Mar Yehuda), that he is meticulous about halacha; but I am not certain of that master (referring to Bati bar Tuvi), that he is meticulous in this regard.”

There are some opinions who hold that King Shapur said to Bati bar Tuvi: “Remember what you did last night.” (The Persian practice was to present a woman to each guest. Mar Yehuda did not accept the woman who was sent to him, but Bati bar Tuvi did, and therefore he was not assumed to be meticulous with regard to eating kosher food.)

Is an Etrog Sharp?

Since an etrog is sharp, the Rashba (Torat HaBayit, 2:4) infers from this story that plunging a non-kosher knife in the ground is effective even for cutting sharp foods. This the ruling of the Shulchan Aruch (Y.D. ibid).

The Chelkat Binyamin (121:7 based on the Pri Megadim) explains that, according to the Rashba, plunging the knife in the ground cleans the surface of the knife, extracts flavors from the surface of the knife, and weakens the flavors absorbed in the entire knife. Thus, even cutting something sharp (which usually extracts the flavor from the entire knife as is evident from Y.D. 96) is permissible.

Others say that an etrog is not as sharp as a radish and other sharp foods (Bechor Shor, based on Tosfot, quoted in Pit’chai Teshuvah 9, on Y.D. ibid). They therefore rule that one may not cut sharp foods with a knife that had been plunged into the ground until it is kashered with boiling water. In practice the halacha is not clear (Chelkat Binyamin on Y.D. ibid).

Some say that nowadays one can clean knives with steel wool or other abrasive methods and that this is just as good as plunging it in the ground. Others say that we should continue to kasher knives by the traditional method mentioned in the Talmud.

Some say that nowadays, it is best to clean a knife well with steel wool or the like and then pour hot water on it. (This applies to knives that did not absorb with heat as explained above as such knives should be kashered in boiling water.) [See sources quoted in Hilchot Bassar BeChalav, pg. 435.]