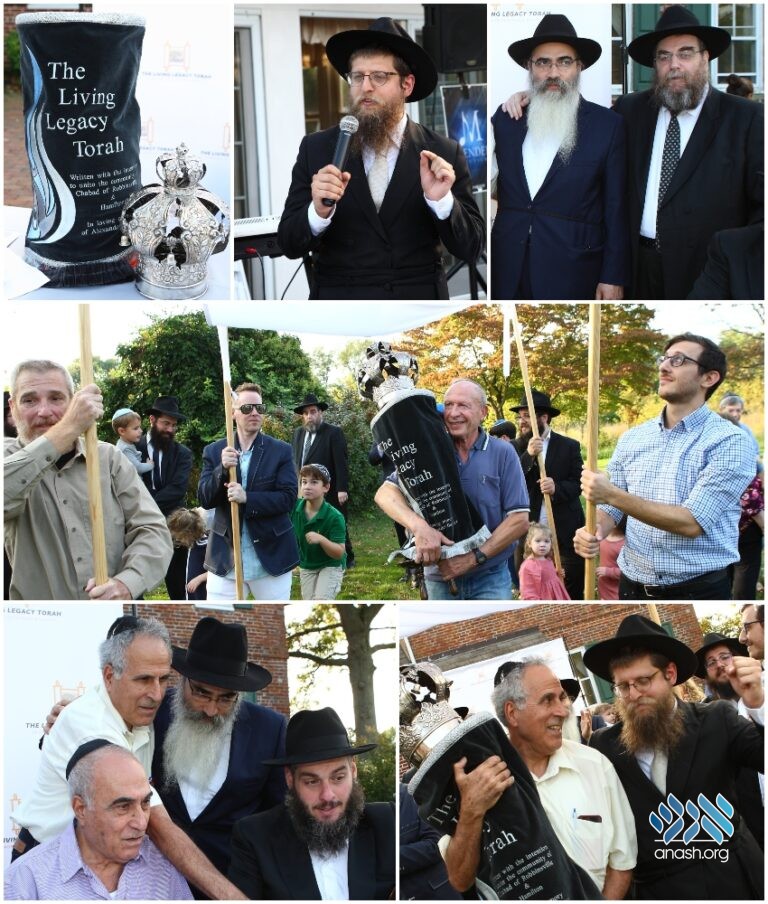 On a sunny June afternoon, two New Jersey shluchim who didn’t know each other sat down near each other during a farbrengen. They struck up a conversation, and the result was a new Shabbos minyan and a new Torah. The completion of the Torah was celebrated this week.

Last week, in the little township of Robbinsville, NJ, history was made. The first-ever “Hachnochas Sefer Torah” was celebrated in town. Many families gathered to witness this momentous event and join in the escorting of a brand new Sefer Torah to its home.

The tale of the making of the Robbinsville and Hamilton Torah is no ordinary one and the story begins half a year ago at a Shluchim Gathering organized by the Chabad of New Jersey Mental Health Initiative, a project of the Rabbinical College of America in the Garden State.

On a sunny June afternoon, shluchim from all over New Jersey made their way to Tenafly for a special event; a gathering of Shluchim and their families with the sole purpose of sitting together in unity with fellow shluchim – Sheves Achim Gam Yachad – reaping the soul-nourishing benefits of brotherhood and sisterhood. Rabbi Yaacov Chaiton, his wife Chana and their young brood of children, Shluchim to Robbinsville and Hamilton were among the attendees who enjoyed the camaraderie and inspiration of the day.

A lavish dinner culminated the event and Rabbi Chaiton sat down with his children to eat at one of the many tables. Seated on his left was an older Shliach he didn’t recognize, and he introduced himself. The older gentleman turned out to be the host of the event, Rabbi Mordechai Shain, shliach to Tenafly and they began chatting. Rabbi Shain reminisced about his early days on shlichus and some of the initial challenges of that time. Rabbi Chaiton shared his experiences building a small but growing community. The conversation was a typical one between a veteran and younger Shliach.

Rabbi Shain listened as his younger colleague described his fledgling organization, the Hebrew School and ongoing Torah classes. Rabbi Chaiton added, “We haven’t started a minyan. We don’t have a Torah yet.”

Rabbi Shain paused for a minute and then said gently, “Rabbi Chaiton, on Erev Shavuos we had a Hachnosas Sefer Torah. A baalebos and friend of ours attended and was so moved by the event, he decided he wanted to dedicate a new Torah as well. I encouraged him to take on this Hachlato Tova and suggested that he give his new Torah to a young community that doesn’t have one yet. He loved the idea and I committed to finding the right home for his Torah. I believe Hashem has orchestrated this meeting, leading me to the new Torah’s recipient and I will introduce him to you with the intention that you begin regular Shabbos Minyanim.”

A new Torah. A Shabbos Minyan. A giant leap in growth so suddenly, in the blink of an eye. A mix of emotions coursed through Rabbi Chaiton as he digested the opportunity. He was filled with gratitude, disbelief, admiration, hope, and anticipation. A fellow Shliach was not only willing to share his resources, but he was eager to and was actively looking for who to share with!

Not willing to waste any time, Rabbi Shain summoned Rabbi Chaiton out of the dinner hall to discuss the details of the Torah and to connect Rabbi Chaiton with the donor. They called the donor together to share the news that the Torah he wanted to write had a home. Rabbi Chaiton thanked the donor for his generosity and assured him that his vision of a new minyan would indeed come to fruition.

Rabbi Chaiton told the wonderful news to his wife who was also in joyful disbelief. The couple had recently been speaking about starting a Shabbos morning minyan once Covid restrictions were lifted. This surprise gift couldn’t have come at a better time.

A few weeks later, on Gimmel Tammuz, the first deposit was made to the Sofer and Baruch Hashem on 27 Tishrei 5782, the new Torah was brought to its home with much joy at its Hachnosas Sefer Torah – the first-ever in Robbinsville/Hamilton, NJ.

The story could end here, with Rabbi Chaiton graciously accepting the gift of the Torah, growing his minyan and Rabbi Shain continuing his shlichus in Tenafly. But Rabbi Chaiton wanted to pay the gift of brotherhood forward. “My wife and I were so incredibly grateful to Rabbi Shain and his family for their noble kindness and to the Chabad of New Jersey Mental Health Initiative for creating the opportunity for relationships between Shluchim to blossom. We wanted to take part in extending the ripple effect of kindness and share what we have with a friend.”

Rabbi and Mrs. Chaiton piled their children into their car and drove to a local Kosher grocery where they packed up a box of Kosher treats and shipped it off to a family of Shluchim in a remote town with no Kosher stores. Then, Rabbi Chaiton put pen to paper and shared his incredible experience in hopes that this story continues. From a shared lunch at an RCA get-to-gather to a new Torah making its way through the streets of Robbinsville, to a package of Kosher goodies surprising children in a remote town, to you! Where will the next act of selfless brotherhood take place? That’s up to you and the possibilities are endless!