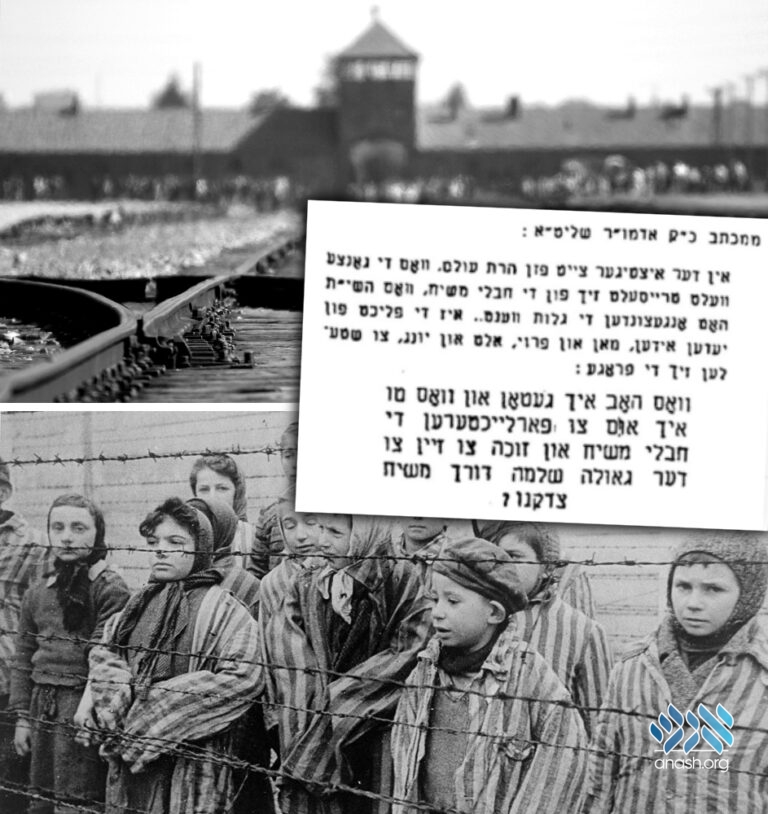 On Tisha B’av, many commemorate the destruction of European Jewry and the murder of six million Yidden during the Holocaust. On a number of occasions, the Rebbe addressed the horrific events of that era.

“At the present time of haras olam, when the whole world shudders from the birth pangs of Moshiach, when Hashem has set the walls of galus aflame… it is the duty of every Jew, man or woman, old and young, to ask themselves this question: What have I done and what am I doing to ease the birth pangs of Moshiach and to merit the complete redemption through Moshiach Tzidkeinu?”

These words, selected from a letter of the Frierdiker Rebbe, were chosen by the Rebbe to serve as the opening for the Hayom Yom calendar. This calendar was printed for the first time in 5703, at the very height of the terrible slaughter of six million Jews in Europe.

In these few lines, the Rebbe encapsulates some of the most important features of his explanation of the meaning of the Holocaust, as well as what our response must be to the horrific events of that era. The Rebbe does not point to a physical or spiritual problem as the cause of the atrocities across the sea. In this letter, the Rebbe portrays the Holocaust as the last gasps of galus, to which our response must be to do all we can to bring Moshiach as soon as possible.

In a reshimah with notes for a talk that the Rebbe gave in the summer of 5702 to the Agudas Harabbonim, the Rebbe addresses the fire raging in Europe.

“Customarily we give an opening greeting, but there is no time now for these kinds of things. It is a ‘time of trouble for Yaakov.’ We must cherish every moment, to do all that we can so that there will be the ‘achishenah (I will hasten it)’ of ‘from it will he be saved’ (see Yirmiyahu, 30:7).” The

Rebbe connects it to the Gemara that says that before Moshiach comes, Hashem will “place a king over the Jewish people whose decrees are as terrible as Haman’s” (Sanhedrin 97b), and then the Yidden will do teshuvah.”

The rest of the reshimah lists a number of areas in which rabbonim can encourage their congregants to improve, as a means of bringing about an end to the horror and meriting the geulah immediately (“le’altar le’geulah”).

Interestingly, even at this early date, the Rebbe does not talk about why the war is happening, but focuses only on bringing the geulah that is to be born from these birth pangs.

WHY DID THE HOLOCAUST HAPPEN?

In 5751 (1991), during the lead up to the first Gulf War, Eretz Yisroel was being threatened by Saddam Hussein with Scud missiles and chemical weapons that were projected to wreak large-scale destruction on the Jewish people there.

A certain rosh yeshiva made derogatory remarks about swaths of Yidden, and in the midst of his vitriol he claimed that Hashem was about to bring a second Holocaust upon the Yidden because of their many sins.

On Asarah B’Teves of that year and again on the following Shabbos, the Rebbe responded to these baseless assertions and vehemently defended bnei Yisroel.

Reacting to the idea that the Holocaust had been a divine punishment to the Jewish people, the Rebbe said: “The destruction of six million Jews with such great and terrible cruelty, a horrific sho’ah that has no precedent throughout history (and will never be repeated), could not have been in the category of a punishment for sins, since even the Satan himself could not come up with an accumulation of sins in that generation that would be sufficient to justify such a harsh punishment!”

The Rebbe said that making such a justification was a defamation of the kedoshim of the Holocaust, whose deaths were al kiddush Hashem.

In a fascinating footnote, the Rebbe refers to a maamar of the Mitteler Rebbe in which he cites a teaching of the Arizal: “The Arizal stated clearly that in his days, all the shmados (decrees of destruction), which had persisted for about 500 years (from gezeiras tatnu—the Crusades in the year 4856 in the days of Rashi until the expulsion from Portugal in the era of 5252), had come to an end.

All those who had died al kiddush Hashem, the thousands and tens of thousands in each generation… were all souls that had lived in the times of the first Beis Hamikdash.”

These were great people with lofty souls, who served Hashem, but who were afflicted by the terrible sin of avodah zarah, and these souls were not repaired until “the time of the philosophers in the days of Rashi and the Rambam down to the Arizal.”

Because these people had given life to such a powerful kelipah, the only way to rectify this was through mesiras nefesh to sanctify G-d’s name with simple faith. However, the Mitteler Rebbe concludes, “in the time of the Arizal, who was from the level of Tikkun, and to whom the wisdom of the true Kabbalah had been revealed, all shmados ceased and will never again occur!”

The Rebbe presents this as evidence that the Holocaust could not have been in the category of punishment or tikkun. In effect, the Rebbe rejects the idea that it was a result of actions or events of the past. Rather, the Rebbe insists that there is no explanation that we could possibly give, and it must be accepted as a Divine decree that is beyond our understanding, in the same way that galus Mitzrayim was.

The Midrash explains that Moshe’s question to Hashem, “Lamah hare’osah la’am hazeh – Why have You dealt badly with this people?” (Shemos, 5:22), was asking the following: Moshe was able to understand how the fates of the generations of the mabul and of the haflagah were commensurate with their sins; but “this people, what have they done for which they are being enslaved more than any other generation?” (Shemos Rabbah, 5:22).

Similarly, we must see the Holocaust as something for which the only response can be “Lamah hare’osah?”

Although there were many Yidden in pre-war Europe who had strayed from the true Torah path, their sins cannot account for what happened.

As we say in Av Harachamim, ‘Make known among the nations before our eyes the avenging of the blood of Your servants that has been spilled.’ These are Hashem’s servants, whom He promises to avenge, because He does not desire their deaths. Those who died were Hashem’s servants, not sinners.

The fact that the six million died al kiddush Hashem is a tremendous zechus and indicates their lofty level, as the Gemara says that “no creature can stand in their designated place [in Heaven]” (Pesachim, 50a).

We know that the Beis Yosef was told that he would merit to die al kiddush Hashem, and that he was later punished by having this merit withdrawn from him (after which he went on to write the Shulchan Aruch and to establish halacha for all future generations).

This gives us some idea of how far beyond anything else the act of kiddush Hashem is, and how unthinkable it is that this occurred as a punishment. All this is aside from the fact that the victims of the Holocaust were “on a great level in fulfilling Torah and mitzvos, as it was (primarily) misaltah u’mishamnah (the finest) of Torah Judaism that was obliterated in the Holocaust.”

Excerpt of an article in the new Derher magazine, titled Spiritual Defiance, the Rebbe’s response to the Holocaust

If you’d prefer to chat with a Derher team member about a Derher subscription, click here.