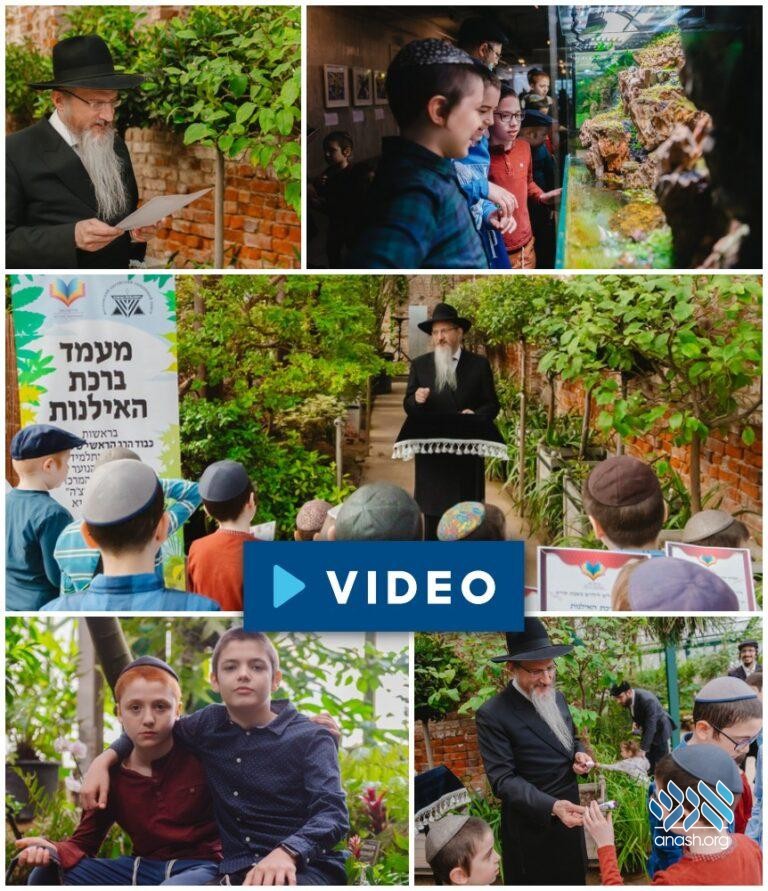 A group of boys from Moscow, who excelled in davening throughout the year, traveled with Chief Rabbi Berel Lazar to Moscow’s historical Botanical Gardens for a “Birchas Ha’ilanos” ceremony, followed by a special tour.

A group of boys from Moscow, who excelled in davening throughout the year, traveled with Chief Rabbi Berel Lazar to Moscow’s historical Botanical Gardens for a “Birchas Ha’ilanos” ceremony, followed by a special tour.

The Marina Roscha shul, the central shul in Moscow, is well-known for its multiple minyanim and Torah classes for adults. Not as well known is that the shul also has special programs for the younger generation, boys and girls children under Bar Mitzva age. Chevra Tehillim, Davening programs, Avos u’Vanim, quizzes on parts of davening, and more.

All these programs are overseen by the dedicated gabaim, under the leadership of Chief Rabbi Berel Lazar, who encourages and guides the wonderful activities. The children also have a huge effect on the older attendees of the shul, many of whom are seeing for the very first time such Chassidic warmth and enthusiasm among children. The pure voices loudly proclaiming “amen, yehei shmei rabba”, or sweetly chanting verses of Tehillim leave a lasting impression on them.

Every year during the month of Nissan there is a special “Birkas Ha’Ilanos” event for the shul’s children, where they are awarded prizes for davening and learning.

This year, Moscow’s weather is still cold and wintery, and it is impossible to find flowering trees in the city. With Hashem’s help, a special permit was obtained from Moscow’s municipality, and the children were brought to a special greenhouse full of fruit trees in Moscow’s Botanical Gardens. The garden is the oldest in all of Russia and has been functioning for the last 315 years! The park’s management did everything they can to help with the event, and they too couldn’t hide their excitement either at the sight of the enthusiastic young boys.

The event opened with remarks from the Chief Rabbi, who spoke about the importance of davening and reciting Tehilim out loud. He also said that in Birkas Ha’Ilanos we say that Hashem created this world for people to enjoy, as the Lubavitcher Rebbe said that this entire world is called “gani”, “my garden”. This means that the world has everything needed for a person’s physical pleasure, and man must utilize all this in order to serve Hashem. We must also recognize that what seems like “nature” is really Hashem’s constant miracles, and when we say Birkas Ha’ilanos we are thanking Hashem for all of His creations, and for watching over them every single day.

Then all the participants emotionally said the blessing on the trees together out loud. They continued with verses of Tehillim and Torah, and concluded with giving tzedaka to the central Gmach.

After receiving refreshments, the children were treated to a fascinating tour of several of the greenhouses which house spectacular flowers and trees, some of them being extremely rare. The well-behaved children and their quiet and orderly manners caused a big Kiddush Hashem and became the talk of the day amongst the staff and management of the gardens.