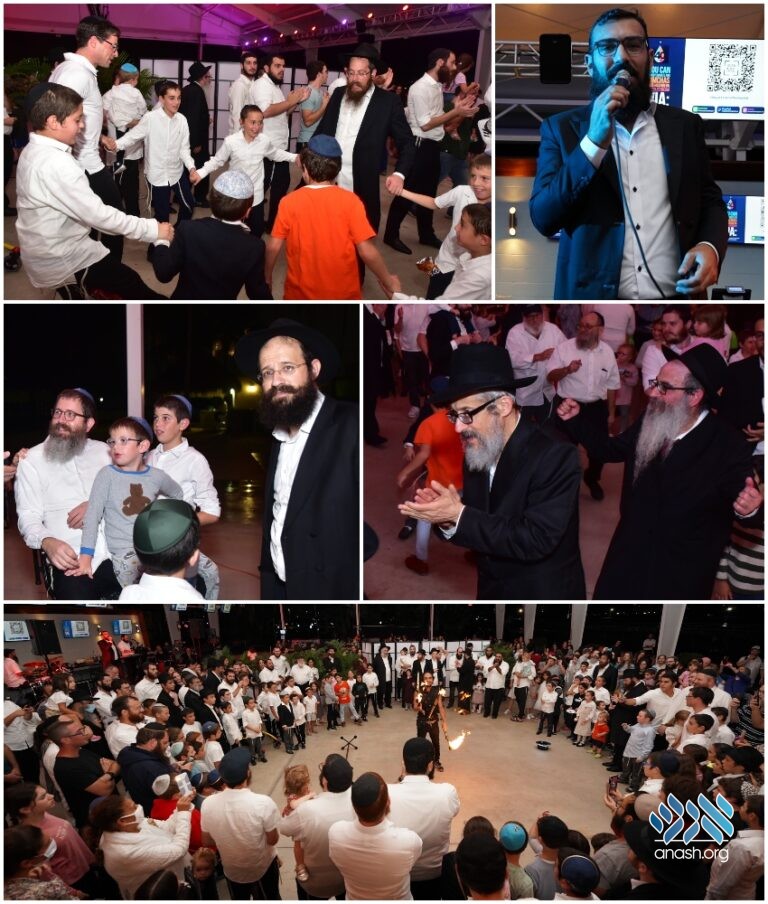 You couldn’t have asked for a better venue. A Giant Tent at Gulfstream, located in between Bisseleh and the Racetrack, built for scores of restaurants shortly after COVID 19 became a grim reality in South Florida, turned into the “perfect venue” for Simchas Beis Hashoeva, last night, Motzoei Shabbos, the sixth night of Sukkos, in Hallandale Beach.

The dancing, musicians, and singers were all under the tent – so rain or shine – which it did rain and it did shine- the event was with the Rebbe’s Brocha a great success.

Aaron Holder also performed together with Choni Teitelbaum who was the leading musician.

There were Rebbe videos from the sixth night and day of Sukkos, a big Sukkah built for the evening, a special stage built for the occasion, a mechitza bought and borrowed for the celebration, free food and water ($3,000 worth) distributed to the Sukkos Musical Festival Participants, jugglers with fire, men on stilts, Litvishe Yeshiva boys, Chassidishe Yeshiva boys, Modern Orthodox and the unaffiliated.

Rabbi Raphael Tennenhaus, head Shliach of South Broward thanks all the donors, organizers, and participants of this Epic Event:

“For over 40 years, we have celebrated Simchas Beis Hashoeva at our Chabad House. We always had two issues; 1- when it rained, 2- the police telling us to stop the music, usually at 10 pm, and sometimes at 11 pm. It was time for an upgrade,” Rabbi Tennenhaus said.

“On 13 Tishrei, last Sunday, I was at the Ohel, and among other matters, requested from the Rebbe for a Brocha for our Simchas Beis Hashoeva, which actually took place when the Rebbe Maharash was the main guest in the Sukkah.”

A team of Shluchim from our office, headed by Rabbi Moshe Schwartz, worked with Mrs. Antian, Aaron Holder, Shuky Sadon, Choni Teitlebaum, Chana Eliyahu and Itamar Antian to put on this incredible production.

Police reported 800-900 people participated during these six hours of celebration, with people coming from all over Dade, Broward, and Palm Beach Counties.

The 42nd Annual South Florida Chanukah Festival is set for the 8th night of Chanukah, at the Big Easy, on Sunday, December 5.

This year, it will be a hybrid event, both being a drive-in, so people have the option of staying in their cars, or next to their cars, (with no worry of rain) as well as a VIP seating section near the stage. Chanukah Festival will feature Jewish Music Superstar Mordechai Shapiro!

You can still help Sponsor the Epic Event of the Gulfstream Simchas Beis Hashoeva here.

The Simchas Beis Hashoeva at Gulfstream, was a project of Chabad of South Broward, leaders in Jewish Education, Outreach and Social Services for over four decades in South Florida.