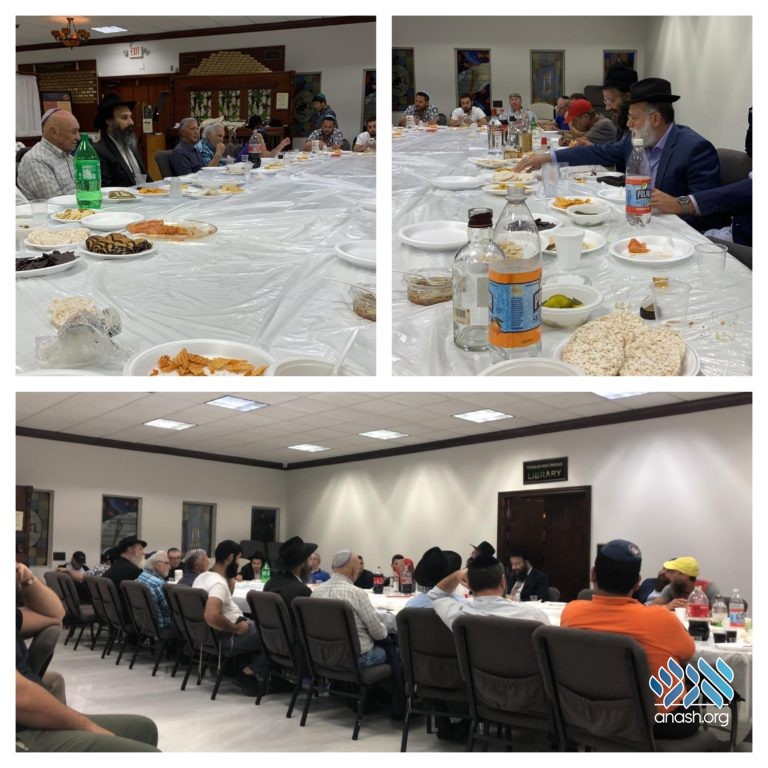 A Siyum of the Rambam’s Mishnah Torah and Sefer HaMitzvos was held at the Hallandale Chof Av Farbrengen at Congregation Levi Yitzchok-Lubavitch this past Wednesday night.

The Farbrengen was led by Rabbi Chay Amar, a long time Shliach to Golden Beach. Rabbi Amar spoke very eloquently about the unique Torah scholarship of the Rebbe’s father and was honored with making the Siyum of the Mishnah Torah. The Farbrengen was attended by over 100 people and lasted over 3 hours.

Also joining in the Farbrengen was Rabbi Moshe Schwartz, Chabad of South Broward’s long-time Administrator. Rabbi Schwartz made the Siyum and the Haschola of the Sefer HaMitzvos.

Rabbi Yossi Lebovics, principal of the Chaya Aydel Seminary, made the Haschola of the Mishnah Torah and recalled how he participated in the huge and first Siyum HaRambam organized by Chabad of South Broward at the old Diplomat Hotel in Hollywood, Florida, on Chol HaMoed Pesach, back in 5745/1985.

The two Siyumim of the Rambam on Chof Av followed nearly a dozen Siyumim of mesechtos in Gemorah at Congregation Levi Yitzchok-Lubavitch/Chabad of South Broward in Hallandale Beach during the nine days and through the 15th of Av.

Rabbi Raphael Tennenhaus, Head Shliach in South Broward since 1980, points out that “it’s a big Zchus to have a Shul that carries the name of the Rebbe’s father, and it was most important to have a big Chof Av Farbrengen this year, as the day marked the 75th Yahrzeit of Rabbi Levi Yitzchok, may his merit protect us.”