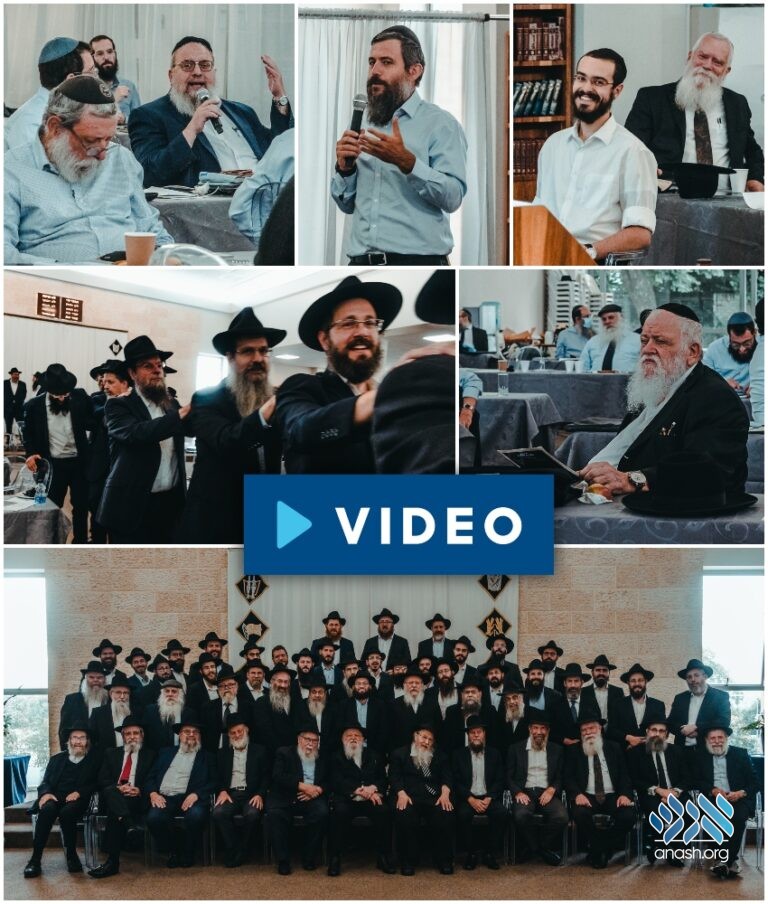 Over 60 Shluchim from across South Africa gathered for Regional Kinus Hashluchim which celebrated 50 years of Chabad presence in the country and its exponential growth.

This year the South African Jewish community is celebrating 50 years since the Rebbe sent Rabbi Mendel and Rebbetzin Mashi Lipskar as his Shluchim to South Africa, and through them the arrival of a further 60 Shluchim and the exponential growth of Lubavitch in South Africa since then.

Paying tribute to them at the recent regional Kinus Hashluchim, Chief Rabbi Dr. Warren Goldstein took note of how the immeasurable contribution of the Lipskars and by extension all of the Shluchim and Shluchos to every area of Jewish life is one for which the South African Jewish community can never fully express its appreciation, and gratitude.

The Kinus was held in the spirit of “מי שיש לו חמישים רוצה מאה ועשרים” utilizing the 50-year milestone with the incredible strength of the 60 couples on Shlichus – 120 Shluchim and Shluchos, to bring a gift to the Rebbe worthy of the milestone celebration on Yud Alef Nissan of 120 years since the birth of our generation’s Moshe Rabeinu.

The Kinus, held at the magnificent Chabad of Strathaven Jewish Life Centre hosted by Rabbi Ari and Namoi Shishler, began with a morning session with a historic overview of the last 50 years, chaired by Rabbi Yossy Goldman.

After highlighting his own experience coming in those early years of the 70’s he then introduced Rabbi Lipskar who welcomed all of the Shluchim on behalf of Lubavitch Foundation. More than reflecting on the past, he spoke about the great opportunity that this moment offers us to give a truly befitting gift, and announced a Vaad Me’ah ViEsrim Shono that would be working with the Shluchim through the year ahead to support the establishment of many new Mosdos.

He then introduced Rabbi Mendel Popack from Lubavitch of the Western Cape, Rabbi Dovid Hazdan from Torah Academy and Rabbi Dovid Masinter from Chabad House who each gave reports from their Mosdos and the plans for the year ahead.

Following a special Shiur by Rabbi Yosef Kesselman on the Maamer of Vi’Ateh Tetzaveh which the Rebbe gave us each to learn 30 years ago, a panel of the Rabonei Chabad of South Africa, Rabbi Sholom Ber Groner, Rabbi Levi Weinberg and Rabbi Gidon Fox, chaired by Rabbi Yossi Chaikin, gave a very thoughtful and sensitive perspective on “the standards of a Chossid” both in terms of Halocho, Hanhogo, Chassidus and especially as the role model that a Shliach is to the community around him.

Rabbi Yehuda Stern then led the open mic session of “why am I here” which was opened with reflections from Rabbi Michael Katz and Rabbi Nissen Goldman as the spirited conversation from across the room brought up topics including tuition challenges, working together and supporting each other, and of course the heart of it all, what does it mean to be a Shliach.

The lunch session was opened with an official welcome from Rabbi Lipskar of the Shluchim that had come from afar including all of the ten Shluchim of Cape Town, Rabbi Shlomo Wainer from Durban and Rabbi Laima Barber from Mauritus, as well as a general overview of the vision ahead especially in the lead up to Yud Alef Nissan.

The second half of lunch was on the theme of Ish Es Ray’ayhoo Ya’azoru with workshops led on Mental Health led by Rabbi Eitan Ash and Rabbi Nissen Goldman, Shidduchim led by Rabbi Chaim Klein and Rabbi Dovid Wineberg, Chinuch led by Rabbi Motty Hadar and Rabbi Reuven Finklestein and Finances led by Rabbi Shmuli Simpson and Rabbi Ari Kievman.

The afternoon session then began, with the focus of the day around the lead-up to Yud Alef Nissan.

The extensive materials collected and published by the Project www.1210Mosdos.com from the Vaad Or Vechom set the tone for the afternoon in a Shiur that was led by Rabbi Oshy Deren giving an overview of the Yud Alef Nissan in the Rebbe’s words, particularly in the years 5711 and 5752.

Rabbi Ari Shishler then opened up the workshop by introducing a number of ideas and suggestions in a session that also had Rabbi Shlomo Wainer, Rabbi Mordechai Rodal and Rabbi Pini Pink sharing their perspectives and inspiring thoughts around the appropriate gifts and Mosdos that we can achieve.

An inspiring highlight of the day was a rousing call from Rabbi Moshe Kotlarsky, chairman of the International Kinus who received numerous Brochos from the Rebbe for regional Kinusim around the world, joined in by Zoom and after a rousing talk on the vision of what we as Shluchim can do collectively around the world, encouraged the Shluchim to participate in the mammoth project he has spearheaded through www.KerenHashluchim.org.

Rabbi Levi Lipskar, chair of the newly formed Vaad Me’ah Vi’esrim, then opened up the session to the floor where each of the Shluchim had a moment to share their potential “pledges” of the new Mosdos with an exciting momentum building in the room as ideas of new Shluchim and Chabad Houses, Mikvaos, Buildings, Libraries, Program Divisions and more were raised, as potential gifts that we as Shluchim will be able to give the Rebbe over the year ahead.

Following a beautifFollowing a beautiful message from Chief Rabbi Goldstein during which time he delivered a masterful perspective on the Rebbe’s Sicha around the unique quality and message of Purim Katan, the tables were all brought together, and Rabbi Dovid Wineberg led the Farbrengen, flowing through the decades of Shluchim sharing their personal moments of the Rebbe, and memories of Shlichus through the years.

The Farbrengen continued until a spirited singing of Tayereh Bridder’ long after midnight as the visiting Shluchim returned to their hotel rooms to prepare for their flights just a few hours later, taking them back to their Makom HaShlichus, refreshed, energized and motivated to bring the Rebbe’s vision to life, that “Moshiach is coming soon, it will be good in South Africa until then, and even better thereafter.”