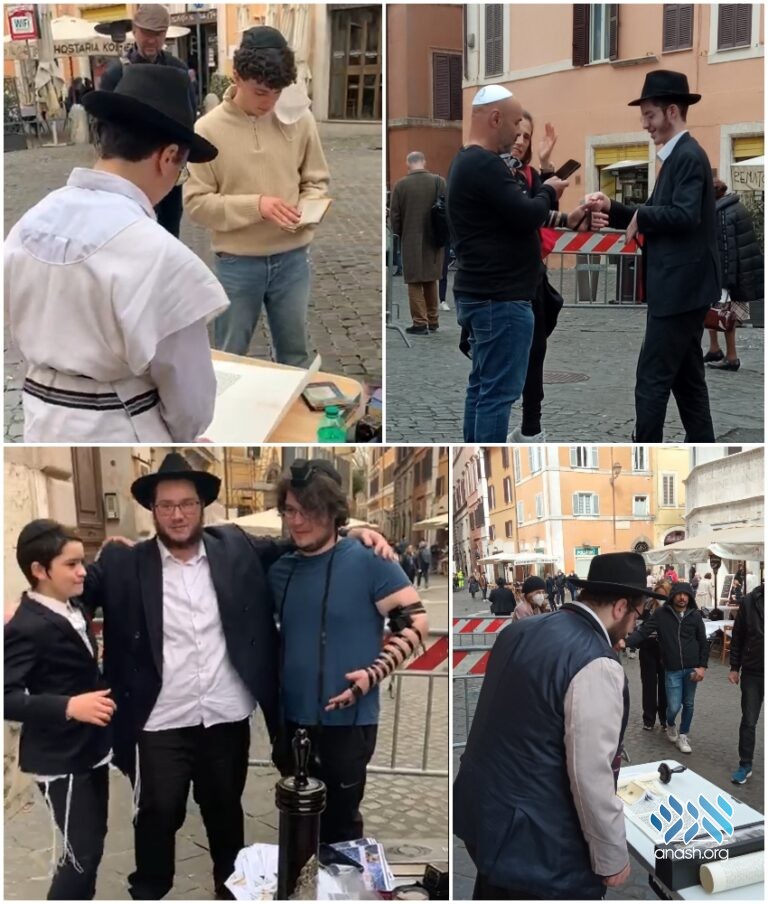 Bochurim from Brunoy, France organized a widespread Purim mivtzoim campaign in Rome, Italy reading the Megillah over 45 times, putting tefillin on over 50 men, and handing out 650 prepackaged Mishloach Manos.

A group of bochurim from Yeshivas Tomchei Tmimin Brunoy, France organized a widespread Purim mivtzoim campaign in Rome, Italy this past week, reaching over 1,000 Jewish people.

In just a few hours, the group read the Megillah upwards of 45 times, put on tefillin with over 50 men (including 3 Karkaftas), and maxed out the 650 prepackaged Mishloach Manos gifts.

The mivtzoim was arranged by Rabbi Ronnie Canarutto, the shliach in Rome, Italy since 5765.

To add to the festive air, Rabbi Canarutto arranged for a mitzvah tank to drive around the city to attract the attention of the thousand tourists from around the world visiting the city.

Besides all the touristic destinations around Rome, the bochurim spent time in the old Jewish ghetto of Rome where hundreds of tourists visit daily and many were inspired and motivated by the chayus and warmth that the Bochurim conveyed.

Following Mivtzoyim Rabbi Canarutto held a Purim farbrengen in the home of the Canarutto family with the young community members joining in.

“I have never seen such a big necessity for Mivtzoyim,” said one Bochur, ” I am so glad I had the opportunity to be a part of it.”

To support this great and incredible work and to ensure the continuity of this shlichus you can donate to www.paypal.me/Pensieriditora