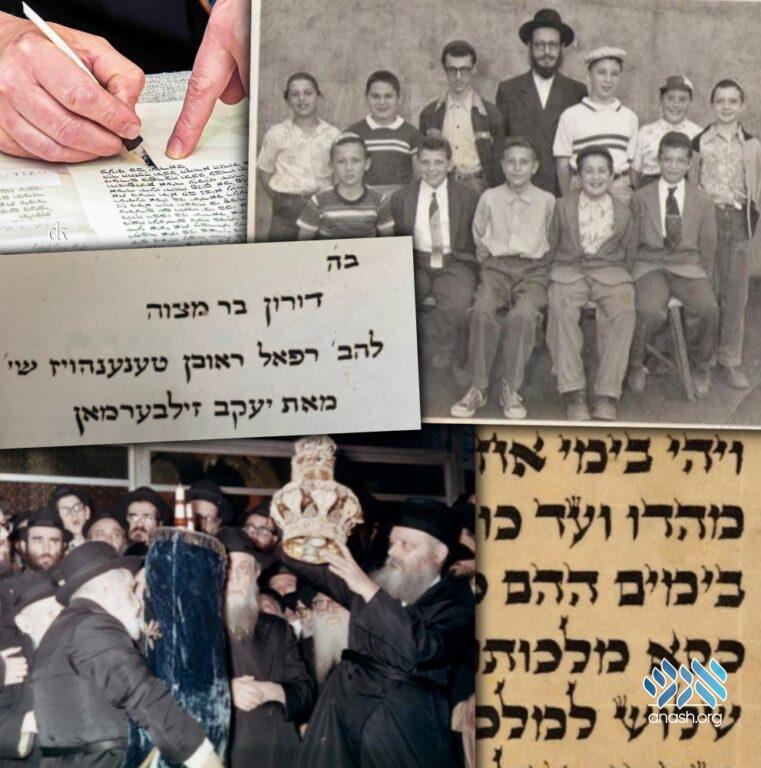 A new teshura tells the story of R’ Yaakov Silberman of Montreal, one of the leading Sofrim of the last century, who wrote a sefer to defend the Alter Rebbe’s ksav which was only published recently – three decades after his passing.

In a new teshura, Rabbi Raphael Tennenhaus, shliach to South Broward, Florida, pays tribute to his teacher, R’ Yaakov Silberman of Montreal, who was also a leading sofer. Rabbi Silberman had written a sefer to defend the Alter Rebbe’s ksav, but passed away before he could complete it. Recently it was published – three decades after his passing.

Rabbi Silberman became close to Lubavitch and took great interest in the Alter Rebbe’s ksav. He communicated with the Rebbe about it and was invited by the Rebbe to be present at the completion of Moshiach’s Sefer Torah.

The teshura contains recollections of Rabbi Silberman and selections from his sefer translated into English.

R’ Yaakov Silberman was born to his parents R’ Avraham Moshe and Rivka Silberman on 13 Iyar, 5681 (1921). Unfortunately, he was orphaned from both parents at an early age.

R’ Yaakov grew up in London, where he studied in the Etz Chaim Yeshiva and then in the Toras Emes Yeshiva, known as “Schneider’s yeshiva.” His colleagues in the latter yeshiva were great Torah scholars such as Rav Yitzchok Tuvia Weiss and Rav Moshe Sternbuch, who recall his tremendous hasmadah and pleasant character.

R’ Yaakov married his wife Frieda on 21 Adar, 5705 (1945), in Manchester. After his wedding, he served as a maggid shiur in the Toras Chaim Yeshiva in London. In 5709 (1949) he moved to Montreal, where he taught in Yeshivas Tomchei Tmimim Lubavitch.

R’ Yaakov would also give shiurim to balebatim, and he had many personal shiurim as well. One topic in which he excelled was the field of zmanim in Halachah. He would prepare a calendar of zmanim for the Montreal community each year.

Alongside his teaching responsibilities, R’ Yaakov was an expert sofer. In addition to his proficiency in hilchos sta”m, he was blessed with a beautiful script and produced superb parshiyos.

R’ Yaakov spent endless hours studying and clarifying the opinions of the Poskim relating to hilchos sta”m, and especially regarding the shapes of the letters. The result was the sefer Chiddush Sofrim, on which he received haskamos from many Gedolim.

R’ Yaakov corresponded with the Rebbe regarding the differences between the Alter Rebbe’s ksav and the other scripts used to write sta”m. Some of the Rebbe’s letters to him are printed in Igros Kodesh. R’ Yaakovwas also one of the sofrim that the Rebbe requested should be present at the siyum of Moshiach’s Sefer Torah. He appears in the famous picture of the Rebbe placing a crown on the Sefer Torah.

R’ Yaakov studied Chassidus on a daily basis, placing special emphasis on Tanya and Likkutei Torah. He would study them each day before davening, after which he would daven slowly and carefully. He didn’t know what it meant to come to davening at the last minute or to rush through davening. After davening, he would study his shiurim and say Tehillim in Rabbeinu Tam’s tefillin, and only then would he go home. On Shabbos and Yom Tov, he would spend many long hours studying Chassidus.

As a chossid, he would go out of his way to be mekarev other Jews and help them in any way possible.

For many years, R’ Yaakov was a teacher in Yeshivas Tomchei Tmimim Lubavitch in Montreal. I merited to be in his class in eighth grade, when I was 11–12 years old. Additionally, he was our neighbor and was a friend of my father.

When I was a child, I heard that R’ Yaakov become attracted to Chabad while still living in London. He once found a sefer lying in sheimos missing the front cover. Perusing it, he was greatly impressed. He said that he wanted to join paths with those Jews who follow the method of serving Hashem explained in this sefer. He later discovered that the sefer was none other than the Tanya.

R’ Yaakov’s father, R’ Moshe Avraham Silberman, published an English translation of Rashi titled Pentateuch with Rashi’s Commentary Translated into English (London, 1929–1934). The rabbonim in England greatly praised this work, saying that in his merit, thousands of English-speaking Jews now had access to the treasures of Rashi.

When learning Gemara in his class, we often came across a word we did not recognize. In all sincerity, R’ Yaakov would say, “I don’t understand. I am sure you are all maavir sedrah on Friday afternoons. This word appears many times in Targum Onkelos. How can it be that you don’t recognize it?!”

As his former student, it is my fervent desire that his crown jewel, Chiddush Sofrim, be given the recognition it deserves. May his efforts to clarify the Alter Rebbe’s ksav bear fruit, putting to rest any questions anyone might previously have had about this superior ksav.

From the author’s Introduction to Chiddush Sofrim:

The sefer I present to you today, Chiddush Sofrim-Tomar Yaakov, is the result of my forty-five years of experience writing and correcting sta”m (as well as gittin).

When I began studying hilchos sta”m in depth, I did not have all the pertinent sefarim available. Therefore, whenever a question arose that was not discussed in the sefarim I had, I needed to study the topic myself and reach a conclusion. I wrote down those conclusions, as well as most of the halachos discussed in these sefarim. I then arranged them according to the order of the Alter Rebbe’s Shulchan Aruch on hilchos tefillin.

I then realized that it would be beneficial for my fellow sofrim if I would share the fruits of my labor with them. In this sefer they will find a suitable explanation on the Alter Rebbe’s Shulchan Aruch. They will also find clarity on various common questions relating to the writing of sta”m, megillos, and gittin.

Another benefit of this sefer:

In the present sefer I resolve the questions posed by the Keses Hasofer and other Acharonim on the shapes of the letters as explained in the Alter Rebbe’s Shulchan Aruch. I also provide sources and explanations for Ksav Chabad, the script devised by the Alter Rebbe. He instructed R’ Reuven Sofer to use this script, which fuses the opinions of the Poskim and the Arizal’s tradition.

I also cite alternate versions with practical application based on old prints of Gemara and Poskim that serve as the basis for hilchos sta”m.

Additionally, whenever possible I try to find leniencies so as to prevent unnecessary genizah of sacred texts. I gleaned this perspective from four sofrim of the previous generation from whom I received guidance when I began writing sta”m.