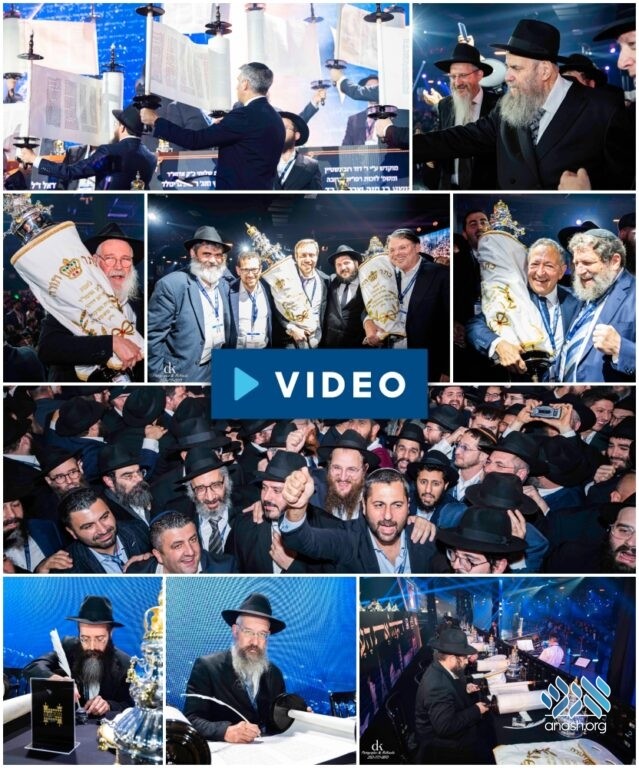 A historic Siyum of 36 Sifrei Torah was the highlight of the Kinus Hashluchim Gala Banquet this year. It was the first time to anyone’s knowledge that so many Torahs have been completed at the same time.

Thirty-six expertly trained scribes, most of them Chabad-Lubavitch emissaries themselves, each armed with a feather quill and a small pot of ink, simultaneously completed a record 36 new Torah scrolls being written for Jewish communities around the world that do not yet have a scroll of their own. The historic Siyum took place in the presence of 6,500 rabbis and guests at the concluding banquet of the International Kinus Hashluchim.

It was just last year that a plan was announced at the conference by Rabbi Moshe Kotlarsky, vice-chairman of Merkos L’Inyonei Chinuch, the educational arm of Chabad-Lubavitch, to write the dozens of new Torah scrolls. The goal had been to complete the scrolls before 11 Nissan, 5783 (corresponding to April 3, 2023), the 120th anniversary of the birth of the Rebbe. However, the scrolls, which were funded by private donations and will be dedicated in honor of Chabad emissaries, were completed in record time, and the rabbis will be taking their new Torah scrolls back to their communities when they return home. It is the first time to anyone’s knowledge that so many Torahs have been completed at the same time.

Among the 36 communities that will receive the new scrolls are: Montego Bay, Jamaica; Salem, Ore., and Kampala, Uganda.

“We have been building a permanent presence here on this island for the past four years,” Rabbi Yaakov Raskin, who directs Chabad of Jamaica with his wife, Mushkee, told Chabad.org. “Thank G‑d, we have managed so far to borrow a Sefer Torahwhenever we have needed it. However, now that we will finally have Torah of our own, it significantly lends to the sense of permanence and establishment that the Rebbe wanted for every Chabad House.”

During the pandemic, a group of Jews in Salem, Ore., made a commitment to have a Shabbos morning minyan at Chabad every week. It is the only regular weekly Shabbat minyan in the city with an estimated 1,000 Jewish households. Yet, the community did not have its own Torah.

“We’ve never owned our own Torah,” said Rabbi Avrohom Perlstein, who directs the Chabad Center for Jewish Life in Salem with his wife, Fruma. “The Torah we have now is on loan to us by the Torah gemach (free-loan fund). Having our own Torah is a dream come true, not only for me but for the locals who have come to really appreciate Yiddishkeit and Torah. It is a talk among the shul-goers each week as they anticipate our very own Torah’s arrival. Having a Torah that is not really ours is nice and does the job, but it’s hard to describe the pride, joy and ownership one feels when a Torah is written just for your community to be used exclusively by your community!”

He continued, “We teach that every single Jew has a personal portion in the Torah, and the more we speak about it, the more this idea becomes more tangible. … The community is so excited.”

According to Rabbi Moshe Raskin of Chabad of Uganda, for the 60 members of the Jewish community of Kampala, having their “own Torah, one that belongs to us, will elevate everything that we have now.”

Among the other communities around the world receiving the Torahs are Barbados, Caldwell, N.J., Alameda, Cal., Nili, Israel, Kingston, Ont., Parkland, Fla., and Ibiza, Spain.