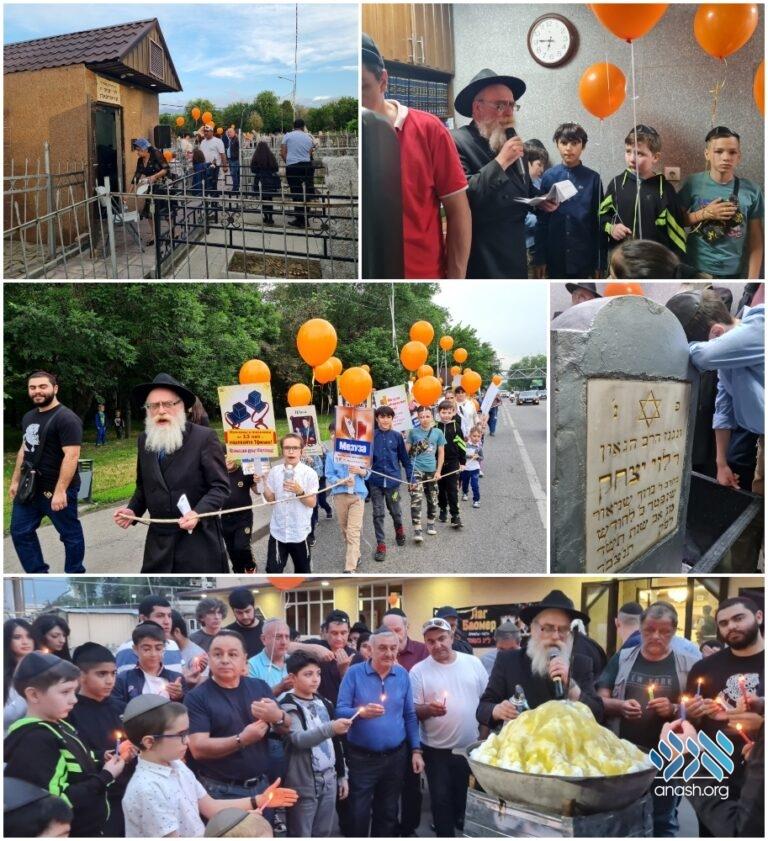 A full day of programs marked Lag B’omer in Almaty, Kazakhstan, including a parade that continued until the Ohel of Harav Levi Yitzchok Schneerson, father of the Rebbe, where a Siyum Harambam was also held.

A full day of programs marked Lag B’omer in Almaty, Kazakhstan, with parades and gatherings throughout the cities.

The festivities began on the evening of Lag B’omer, with a bonfire and kumzitz with members of the local evening kollel. The men sat around the fire, singing Jewish songs, learning about Rabbi  Shimon Bar Yochai and saying L’chaim

The next morning, the children of the community got up bright and early to begin preparing for the grand Lag B’omer parade. “Rebbe Shimon will be dancing with us in the parade,” the children knew to tell.

The parade, with children holding signs illustrating various mitzvos, marched proudly through the streets of Almaty, continuing towards the Jewish cemetery. There, the parade continued right up to the Ohel of Harav Levi Yitzchok Schneerson, father of the Rebbe.

At the Ohel, the parade participants burst into a lively rendition of Reb Levik’s hakafos niggun, with the children joining along, singing loudly and proudly.

As the participants entered the tziyun, a Siyum Harambam was held, led by Head Shliach Rabbi Yeshaya Cohen. As is customary, chapters of Tehilim were recited and a pan klali was read, requesting blessings for the Jewish communities, supporters, Shluchim and for peace in the world.

A grand feast was waiting back at the Chabad house with a barbecue, magician and entertainment. The children said the 12 pesukim for all to repeat. The event culminated with raffles for various Jewish book and prayers for the immediate geulah.

The Head Shliach and Chief Rabbi Rabbi Yeshaya Cohen, noted that the success of the Lag B’Omer events is especially attributed to the Shluchos who worked tirelessly on arranging the events.