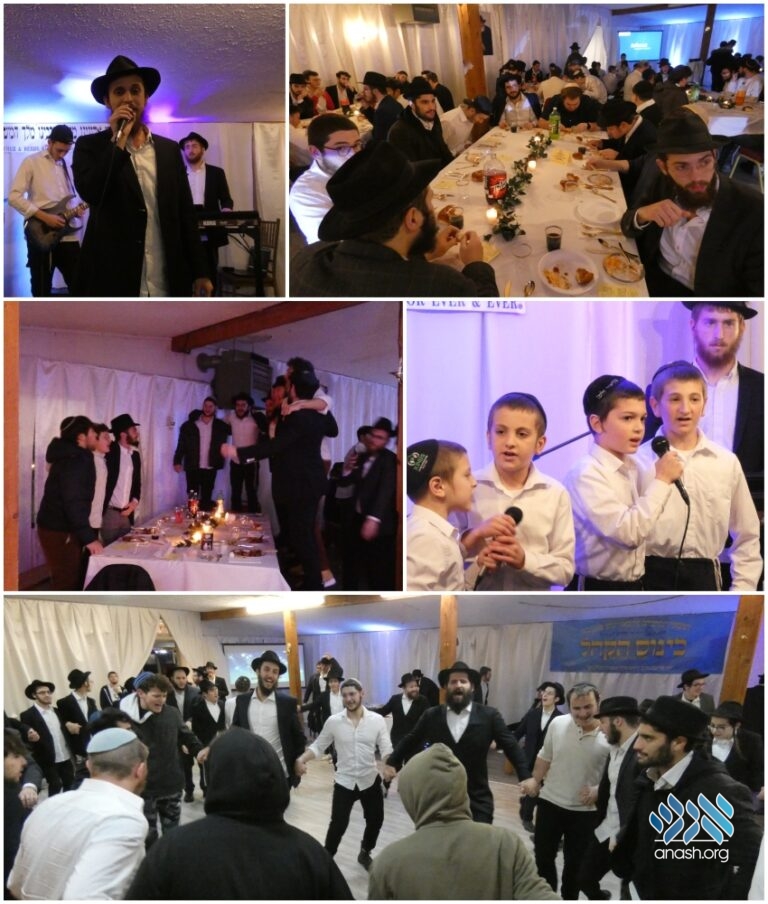 In honor of the anniversary of the Rebbe and the Rebbetzin, Tomchei Temimim of the Poconos invited all Yeshivas in Northeastern Pennsylvania to join together for a hakhel farbrengen and dancing, in a wedding-style atmosphere.

In honor of the anniversary of the Rebbe and the Rebbetzin this Yud Daled Kislev, Tomchei Temimim of the Poconos invited all Yeshivas in Northeastern Pennsylvania to join together for a hakhel farbrengen and dancing, in a wedding-style atmosphere.

The evening began with live music played by Yossi Forester on the drums, Dovid Chaim Boteach on the guitar, and Yossi Blokh on the keyboard.

The bochruim were treated to a delicious four course meal. The emcee for the night, Yossi Hendel of Tomchei Temimim Poconos welcomed everyone and called up Zalman Klasner from Wilkes Yeshiva to recite the Rebbe’s Kapitel.

Rabbi Shmuly Newman, mashpia at TTP gave a synopsis of the Maamer Basi Legani. Yair Cohen, Maggid Shiur at Bais Menachem talked about Hakhel in general and how the diversity of Yeshivas makes this hakhel gathering even greater.

Rabbi Aronson, Mashpia in Mesivta D’Kinston talked about the Avodah that this day demands, and Rabbi Matusof, Mashpia in TTP, spoke about the Tshurah the Friediker Rebbe prepared for the wedding and the lessons that can be learned from it.

Throughout the evening you could feel the pleasantness of Sheves Achim Gam Yachad.

After benching, Mendy Hillel of TTP played daled bovos beautifully on the violin which led to joyful dancing into the night.

A special thanks to all Yeshivas for coordinating together and the bochurim who made the event happen.