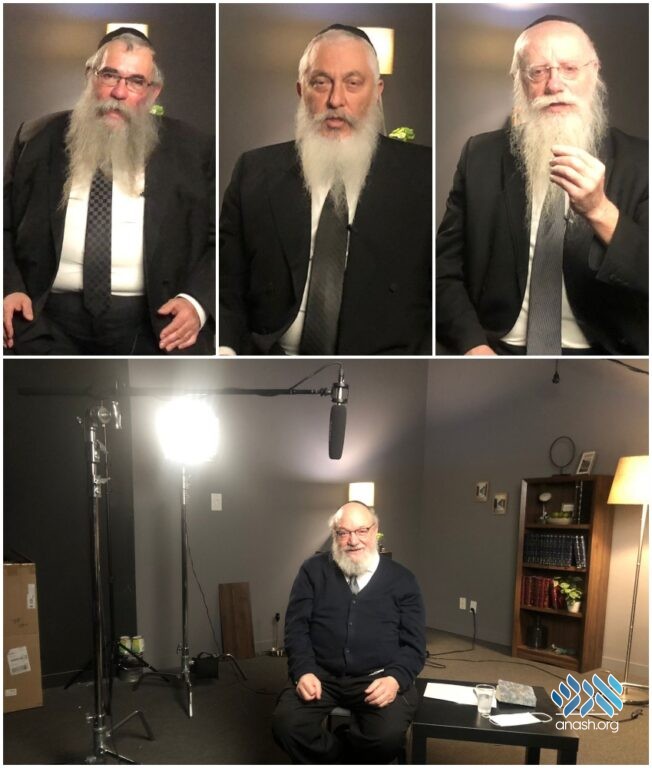 Taking advantage of the large number of shluchim in Crown Heights over the Kinus Hashluchim weekend, JEM’s My Encounter held six interviews over the course of one weekend, even streaming one live as it took place.

Taking advantage of the large number of shluchim in Crown Heights over the Kinus Hashluchim weekend, JEM’s My Encounter, headed by Rabbi Yechiel Cagen, held six interviews over the course of one weekend, even streaming one live as it took place.

The My Encounter with the Rebbe project was launched by JEM in 1998, aiming to document as many stories of the Rebbe as possible. The project has already collected hundreds of recorded testimonies in which ordinary individuals and public personalities detail the relationship and correspondence they maintained with the Rebbe. Ranging between one and seven hours in length, each interview tells a different personal story – together, comprising a testament to the Rebbe’s far-reaching influence and impassioned leadership, and a tool to teach generations that follow. Although most of the interviews are conducted in English, Yiddish and Hebrew, some of them are done in Spanish, French and Russian as well.

A weekly publication prints one story from the interviews each week, short excerpts from these interviews have been released weekly in the weekly Living Torah video, and a number of books and documentary series have been published based on the interviews. These included The Early Years Series, The Rebbetzin, Faithful and Fortified, and the My Story and One by One books.

Over the weekend of the Kinus Hashluchim, as thousands of shluchim from across the world poured into Crown Heights, the staff at My Encounter, headed by interviewer Bentzion Pearson worked overtime to hold the maximum number of interviews as possible. They managed to hold interviews with six shluchim from the USA, Eretz Yisroel and France, bringing them into the My Encounter studio in the JEM offices in Crown Heights.

“In the tefillah of unesane tokef we say: ‘Like a shepherd pasturing his flock, making sheep pass under his staff.’ The Rebbe connected with every Jew on their level, regardless of background and with boundless love and affection, revealed by him and her their indispensable mission in his larger plan —bringing the world to it’s ultimate purpose. It’s just fascinating to hear first hand from individuals of all different affiliations and demographics, how their lives were impacted by the Rebbe’s guidance. Each person is a world of its own —and it never gets tiring,” Rabbi Pearson told Anash.org.

If you know of anyone who has a story of the Rebbe and is willing to be interviewed please email the My Encounter team at: [email protected]