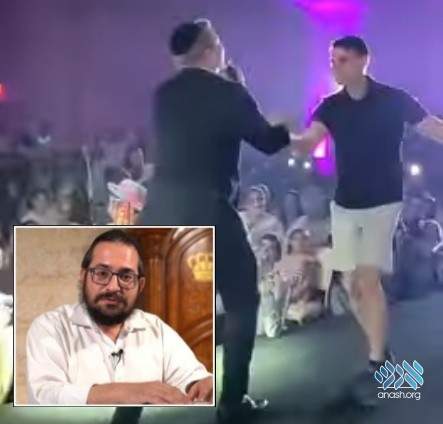 After a most wonderful, over-the-top enjoyable Yom Tov in the upscale Trump National Doral in Miami FL, the many guests were in for yet another fantastic experience. After suffering through a full year of Covid related lockdowns, the many guests who attended the program were eager and happy to enjoy a “back to normal” Yom Tov. The organizers of this upscale getaway did not disappoint. It was indeed a fantastic Pesach with very few noticeable restrictions.

One great highlight of the entire Yom Tov came about at “the eleventh hour”, right before it was about to end. People from all walks of Jewish life sat down together for a grand Seudas Moshiach. Men, women and children. Black hatters, a few Kapotes, Sefardim, Ashkenazim, Modern Orthodox and even some not yet so Frum. Some 150 people who chose to spend their final hour of Pesach to celebrate the Coming of Moshiach. Many even stayed on past the end of Yom Tov to continue the Farbreng, although the big Chometz party was knocking on their door.

Rabbi Avrohom Brashevitzky the local Shliach who helped organize the Seudas Moshiach, opened the event with a brief overview of the meaning of this Seuda while highlighting the fact that this custom has evidently been in practice amongst many Sefardim for many generations. He also added that the Gaon of Vilna instructed his followers to eat a Seuda Shlishis on Acharon Shel Pesach, something which is typically done on Shabbos only.

The joyous singing was led by the famous singer Mordechai Shapiro who masterfully weaved together well-known Chabad Niggunim and popular Jewish songs.

The highlight came in the form of fulfillment of The Rebbe’s prophecy that Moshiach’s will be announced by all the major media. Rabbi Brashevitzky emphasized this point in his introduction of perhaps one of the greatest media personalities of our times. As he is in the midst of building a tremendous media empire, he is still a Frum Yid and a true family man. He spent the entire Pesach in the Trump Doral delivering several powerful, well-attended talks. Ben Shapiro graciously accepted the task of delivering the message of Moshiach’s arrival. He did however quip jokingly about his uncertainty of CNN willingly announcing that fantastic news.

He delivered an interesting Dvar Torah, explaining the difference of opinion between the Rambam and Ramban regarding the Era of Moshiach. He concluded that even if we follow the more rational approach of the Rambam, still it isobvious that the Era will be a fantastic one, full of good choices by all mankind, as there will be a great revelation of G-dliness.

After a few more heartwarming Niggunim the crowd heard from Mr Phil Rosen, vice chairman of Birthright. Mr Rosen is a great community activist with ties to world leaders and a major friend of Chabad. Mr Rosen shared some of his “Chabad” stories, his encounters with so many Yidden and the impact he had when applying the “Chabad thing”. One particular story was about a person he sat near on a flight to Israel. After a less than pleasurable start, the man became more friendly. After 10 hours he asked Phil what he can do for him. Mr Rosen asked him to put on Tefillin and recite Shma. A year later he visited the individual in his Hetzelia office, to find that he has been putting on Tefillin every day since their encounter. Mr Rosen encouraged everyone to become Shluchim in their day-to-day lives, even without “the official uniform”.

The Seuda completed with a message delivered by Rabbi Sholom Meir Holtzkener of Chabad of Las Olas. He shared some of his life story and what led him to leave the business world and become a full-time Shliach. He encouraged everyone to be a Shliach, bring Moshiach, each in their own way and ability.

The event was wrapped up with more singing by Mordechai Shapiro who later expressed how wonderful it was to experience a Seudas Moshiach and end Yom Tov on such a high.