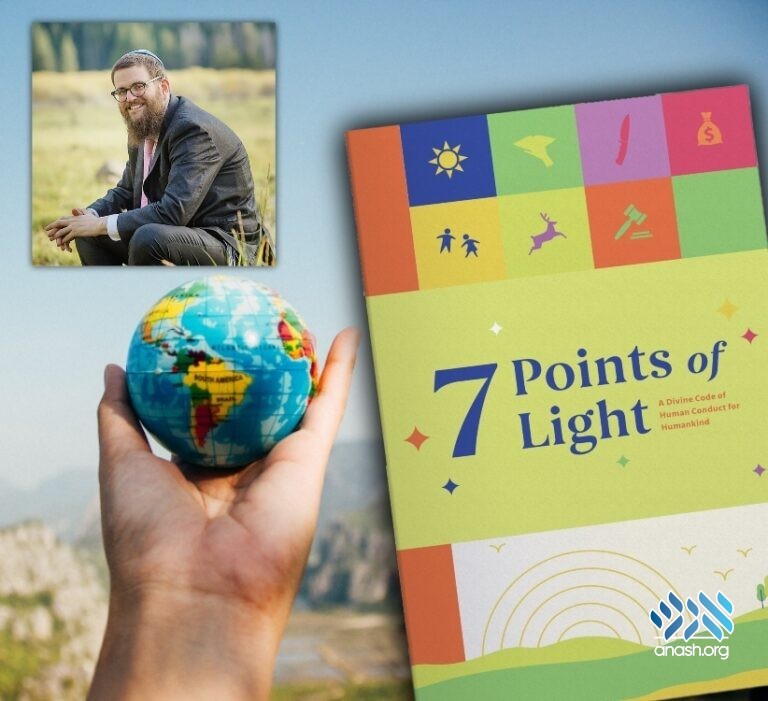 After fifteen years on Shlichus, searching high and low to find ways in which to spread the sheva mitzvos b’nei Noach, Rabbi Chaim and Chavie Bruk of Chabad Lubavitch of Montana gave up searching and decided to act.

“It was unacceptable to me that something that is a clear Halacha in Rambam obligating us to share these seven points of light with the world, something the Rebbe spoke about so passionately and so often, wasn’t available to the masses in a concise, practical and appealing form” said Rabbi Bruk.

The Bruk family lives in Bozeman, Montana and along with their colleagues in Missoula and Kalispell, they find themselves in a state of one million residents with about 5,000 Jews, making the Jews about ½ percent of the State’s population in a parcel of land the size of Germany.

“It’s clear” says Bruk, “that the Rebbe wanted Shluchim to be the ambassadors of light for the entire population, not just the Jews and you can’t do that by fluff inspiration or one liners, it needs to be done properly as befitting for a Shliach of the Rebbe by teaching unadulterated Sheva Mitzvos”.

Turning theory to action, Rabbi Bruk hired world renowned author and speaker Rabbi Lazer Gurkow to put pen to paper and produce a masterpiece on Sheva Mitzvos. Along with the super talented team at Spotlight Design, the physical and spiritual came together and today a brochure has been printed and a website www.7PointsofLight.org is up and running .

“The first 25,000 brochures are on their way to Montana, the website is live and other Shluchim, Rabbonim, members of Anash, Bochurim, can get the brochures themselves for the people they interact with” Bruk said.

The campaign was spearheaded by Miami/Montana businessmen Shea Schneider and Sholom Ber Eckhaus who spent Simchas Torah in Bozeman and realized it’s high time to bring this to fruition. They are now seeking others who believe in the importance of this campaign to join forces and help it continue to transform Montana and the world.

You can join the revolution at www.JewishMontana.com/ShevaMitzvosRevolution