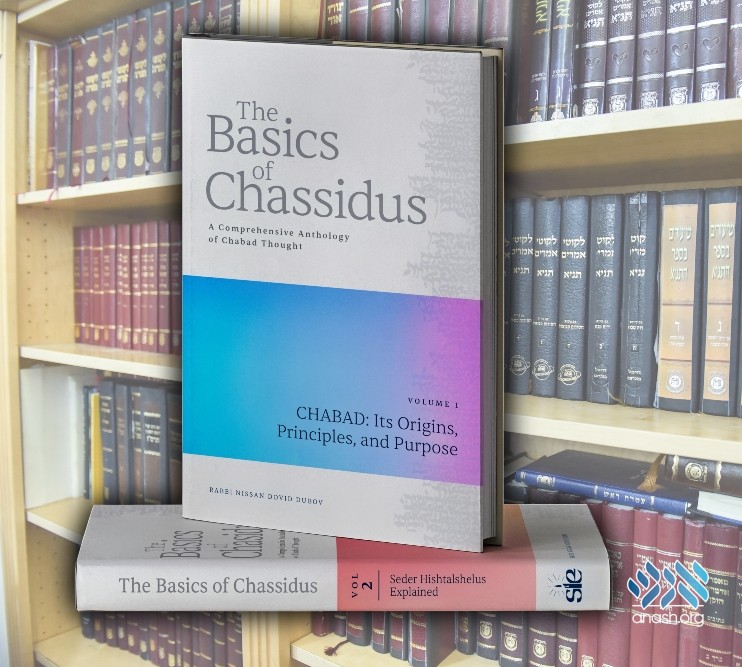 On the auspicious day of 20 Kislev, Sichos in English is proud to debut the first volume of the monumental and groundbreaking series, ‘The Basics of Chassidus’, the first-ever of its kind Chassidic Encyclopedia in English.

Why the joyous celebrations on 19-20 Kislev? The primary reason for rejoicing is in celebration of the Alter Rebbe’s liberation and by extension, the release of Chassidus. Chassidus, the elixir for aching souls, the reviving waters for parched lips, and the life to Torah texts, was allowed to be accessed by every Jew, beginner, and scholar.

Although Chassidus can now be learned, the teachings of Chassidus are not compiled in one collection. The ideas of Chassidus are interwoven amongst centuries of Chassidic teachings. To truly understand the full scope of any Chassidic concept or topic, one has to explore many teachings and insights which can take a lifetime of Torah study. Not anymore.

On this auspicious day of 20 Kislev, Sichos in English is proud to debut the first volume of the monumental and groundbreaking series, The Basics of Chassidus. As the first-ever of its kind, this Chassidic Encyclopedia in English makes Chassidus readily accessible to those who want to understand its brilliance and depth.

This comprehensive compilation is the painstaking work of Rabbi Nissan Dovid Dubov of Wimbledon, England, Shliach of the Rebbe and author of numerous books, and Rabbi Naftoli Hertz Pewzner, mashpia in Yeshivas Tomchei Temimim, Morristown, New Jersey. “The vision for this groundbreaking series is to take the Rebbe’s vision of making Chassidus accessible, one step further,” says Rabbi Pewzner. “If a beginner or veteran scholar wants to get a wholesome picture of a Chassidic concept, The Basics of Chassidus series is where they should look.”

The beauty of Chassidus is its depth. However, because Chassidus is not organized by topic and one idea can be interlaced through an array of teachings, studiers don’t always get the satisfaction of understanding the breadth of an idea. The Basic of Chassidus series intends to fill that gap. Its vision is to serve as a comprehensive explanation of Chassidic ideas in English.

Beyond the masterfully explained content, the thoughtful structure of this book enhances its reader’s study. The ideas are organized by topic, rather than Alphabetical order, to create an intuitive flow. The division of the chapters and subchapters allows for easier navigation. As this series is a supplement to the original texts, sources accompany the ideas brought forth encouraging further study of the original discourses.

This first 450-page volume of this series focuses on the basis of what Chassidus Chabad is about and is titled: Chabad: Its Origins, Principles, and Purpose. It covers the nature and theme of Chassidus and the specific contribution of Chassidus Chabad. Core ideas such as Achdus Hashem, avodas Hashem, Dirah BeTachtonim, hafatzas hamaayanos, and the Rebbe and chassid relationship are all thoroughly treated. A theme built throughout the volume is an appreciation of Chassidus’s “yechidah-effect” and its role in preparation of the Geulah.

Following volumes will cover the scope of Chassidus relating to the study of G-dliness, the process of creation commonly known as seder hishtalshelus, the dynamics of Torah and mitzvos, and daily life illuminated by Chassidus. Themes like Shabbos, the holidays, life events, and more will also be featured. As Rabbi Dubov accurately encapsulates this series, “It projects a Moshiach mindset, a synergy of body and soul, the very essence of Chassidus.”

In the spirit of the day, Sichos in English is sharing the chapter titled “Chabad” which focuses on the formation of Chassidus Chabad, its novelty, and its development from the days of the Alter Rebbe until the present.

“With this groundbreaking Chassidic encyclopedia, we want to make the richness of Chassidic ideas easy to reach,” shares Rabbi Shmuly Avtzon, Director of Sichos in English. “With this series, a person can look up a Chassidic concept and get a full picture of an isolated idea and where it is discussed in Chassidus.” This series seeks to provide the pivotal “aha” moment of clarity which brings Chassidic ideas to life through providing understanding of the depth and breadth of an idea.

The clearly structured ideas displayed provide an elaborate understanding of the topics discussed. Novices and scholars can further their study from the curated wisdom in these volumes forming a wholesome understanding of intricate ideas that create the tapestry of Chassidus. In celebration of Chassidus, Sichos in English is enabling its readership to further their study of Chassidus with the debut of The Basics of Chassidus. The first volume, Chabad: Its Origins, Principles, and Purpose, will be available for pre-order at the Annual Sichos in English Hey Teves Sale taking place from Tuesday, Gimmel Teves, December 7 until Sunday, December 12, Ches Teves.