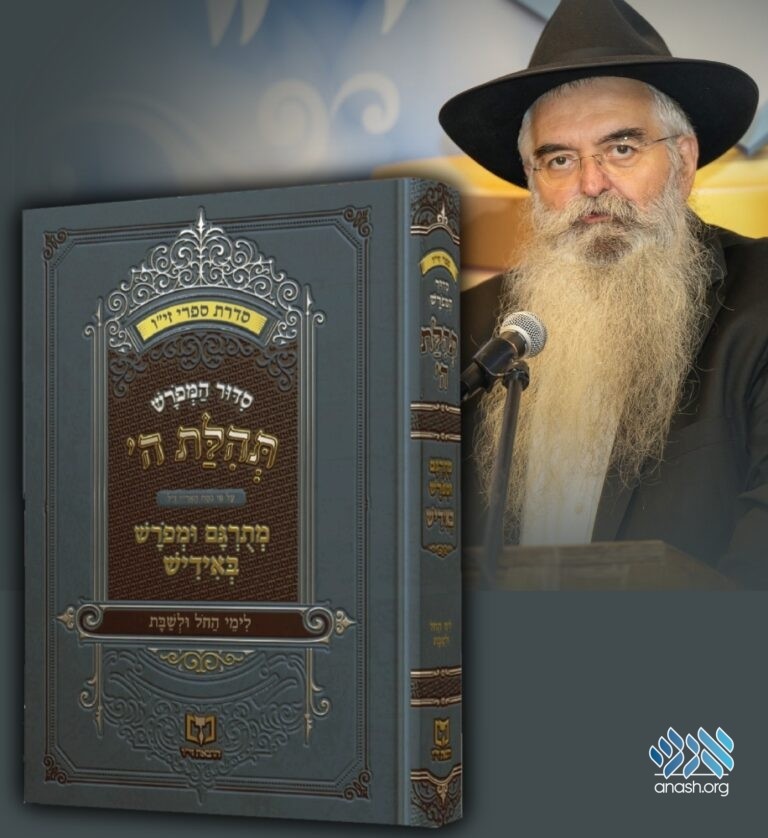 A new edition of Siddur Tehilas Hashem with a full Yiddish translation, authored by Rabbi Zushe Wilhelm a”h, has just been published.

Translations of the Siddur into different languages are necessary so that people can understand the meaning of the words as they daven. The Tehillas Hashem Siddur has been translated into many languages including English, of course, as well as Spanish, French, Russian, etc. However, there has been nothing for Yiddish speakers.

Now, a new edition of the Tehillas Hashem Siddur has been published, with a translation into Yiddish. This was a major project conceived, designed and executed by Rabbi Yeshaya Zushe Wilhelm a”h.

Over many years, Rabbi Wilhelm worked on numerous projects for the benefit of Yiddish-speakers in general, and for talmidim in yeshivos in particular. As the menahel of Mesivta Oholei Torah, he did so much for the bachurim, to whom he dedicated his life. He published booklets on Gemara translated into Yiddish, maamarei Chassidus from our Rebbeim translated into Yiddish, and more. With all that, his flagship project was a translation of the Siddur. He worked on the translation of every word so the Yiddish can appear directly under the Lashon Ha’Kodesh. This allows one to glance at the translation of each word without it interfering with the flow of the davening.

Rabbi Wilhelm explained why this translation was so important to him. He said that he heard from older Rabonim following World War II, when many Jewish immigrants came to the United States, some went to yeshiva but afterward became very distant from Judaism. The reason was that they had no time to open sefarim and the only sefer they opened every day was the Siddur but they did not understand what it said.

For over twenty years, Rabbi Wilhelm worked on the translation and commentary, constantly improving the wording, structure and layout. He even produced some booklets, excerpts from this big project.

Now, the Siddur has been published in a handsome binding, with a beautiful print, including all the tefillos for weekdays and Shabbos. With much appreciation to Avremi Mann and the Or Hachassidus Machon for helping with this great project.

The Siddur can be purchased online here and at your local seforim stores.