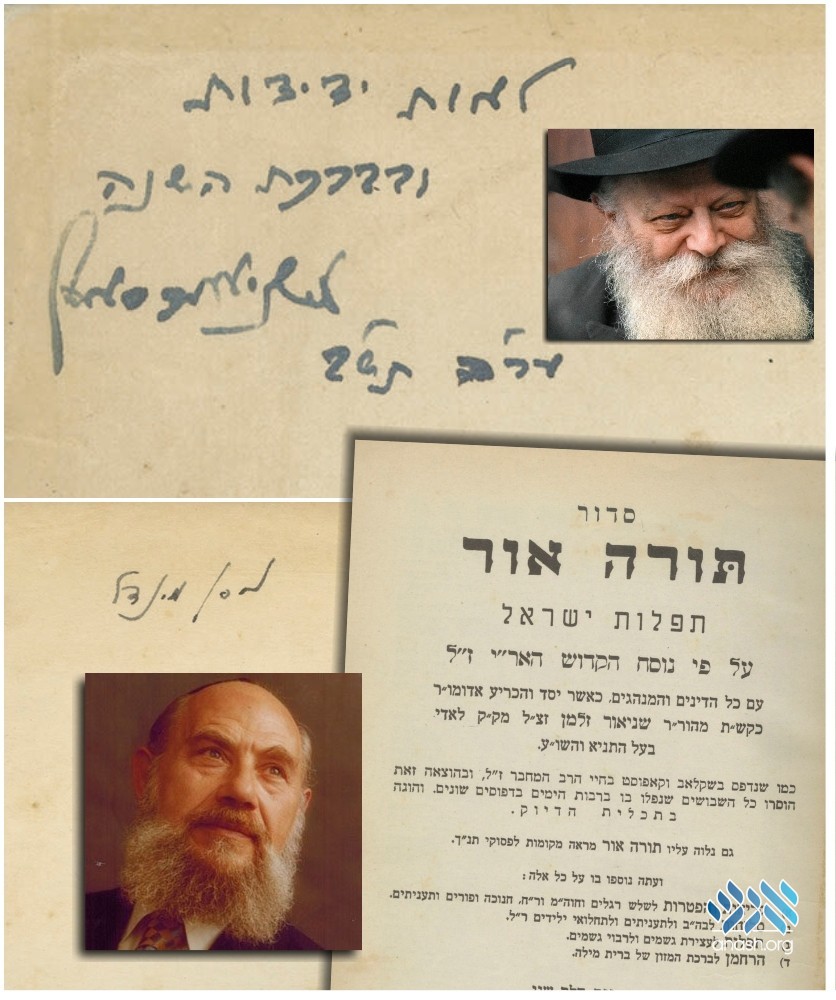 A special siddur owned by Rabbi Nissan Mindel, gifted to him and uniquely signed by the Rebbe, is up for auction.

A unique siddur, signed by the Rebbe is being auctioned off. The Siddur Torah Ohr was gifted by the Rebbe to Rabbi Nissan Mindel on Erev Rosh Hashanah 5702 – 1941 and the inscription on the flyleaf reads “לאות ידידות ובברכת השנה” – “as a sign of friendship and with good year blessings,” followed by the Rebbe’s signature.

The siddur’s printing was organized by the Rebbe shortly after his arrival in the USA on 28th Sivan 5701 – 1941, at the behest of the Frierdiker Rebbe who asked him to proofread previous editions and reprint. The Rebbe spent the months of Av and Elul working on the siddur, which was published several days before Rosh Hashanah.

The recipient of the siddur, Rabbi Nissan Mindel, was the personal secretary of Frierdiker Rebbe, and then of the Lubavitcher Rebbe, with whom he was especially close.

Rabbi Mindel typed all the Rebbe’s English letters and published many of them. He was a noted author and his books were reviewed by the Rebbe before being published, and have since been translated into many languages. He also served as editor of Talks and Tales for over forty years but his magnum opus was his translation of the Tanya into English.

Rabbi Mindel’s exceptional friendship with the Rebbe, and the gift of this siddur, is reported in Sipurim MiCheder HaRabbi: “Over the years, intense feelings of friendship towards the Rebbe developed in his heart… he stated… the Rebbe was ‘my best friend.’ One of the expressions of this friendship was on Rosh Hashanah 1941, when the Rebbe gave a Torah Ohr siddur to R. Mindel, with a personal dedication ‘As a sign of friendship.'”

This specific wording is extremely rare and is not found anywhere in any letter endings of the Rebbe’s Igros Kodesh. Even in the years preceding the Rebbe’s leadership, the word ‘yedidus‘ was only used once.

The 1941 edition of the siddur was edited by the Rebbe, based on the rulings of the Frierdiker Rebbe, who resolved any doubts that arose, particularly those pertaining to nekudos. This edition was printed in only two thousand copies.

This Siddur Torah Ohr was constantly used by the Rebbe, writes the introduction to Siddur HaRav. “The Rebbe would keep it with him at all times, and it almost never left his hands. During his entire tenure, the Rebbe used the same siddur, never exchanging it for a different one… as is well-known, preparing this siddur for print was the first project undertaken by the Rebbe upon his arrival in the United States… and from that moment, he prayed with it for the rest of his life.”

Rabbi Nissan Mindel’s gifted siddur is now up on the auction block for a starting bid of $10,000. Click here to visit the auction site.