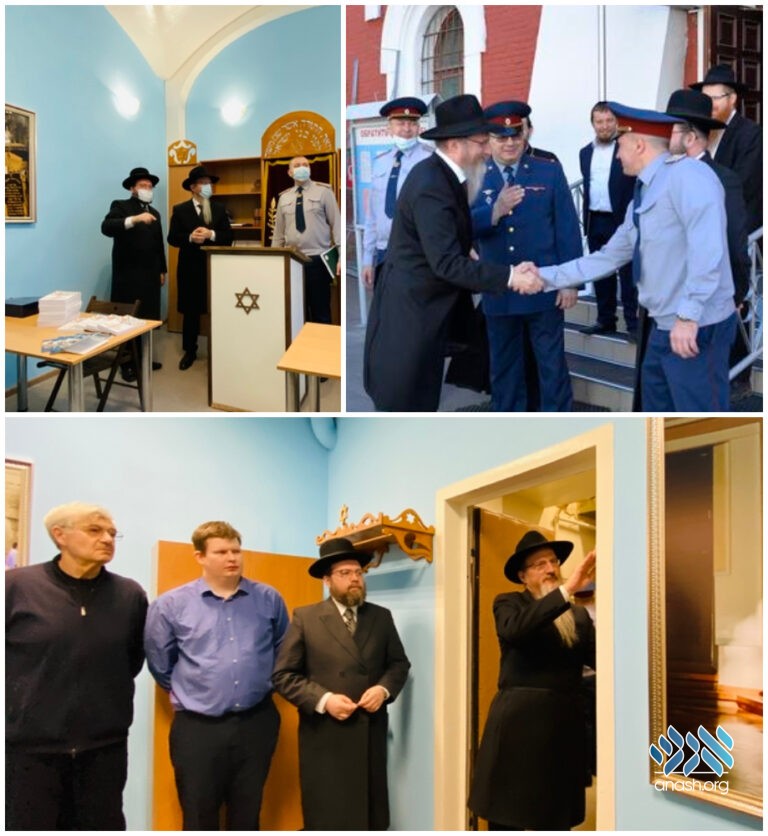 Chief Rabbi of Russia Berel Lazar inaugurated a newly renovated Shul in Russia’s Oldest Prison, where many Chasidim had been incarcerated there for the crime of teaching Torah.

After a decade of activity, the shul in Moscow’s Butirka Prison was renovated by the prison management. The shul, which had opened with special permission from the government, is a regular gathering place for Jewish prisoners wishing to daven, put on Tefillin, celebrate Jewish holidays, or even just to hear a Torah class given by one of Moscow’s Chabad shluchim.

Butirka Prison is the oldest prison in all of Russia, functioning for the past 250 years, many Chasidim had been incarcerated there for the “sin” of teaching Torah. Now, after those terrible times, the place hosts Torah and Chassidus classes, with many other prisons following suit and accommodating the opening of shuls there and assisting the Jewish prisoners throughout the year.

In honor of this event the Chief Rabbi of Russia, Berel Lazar, honored the occasion with his presence. He met with the Prison director, his deputies and the administration staff, to thank them for their investment in the renovations for the benefit of the prisoners in general, and the Jews in particular. He then continued on to the newly renovated shul, where he affixed a mezuzah with the prisoners emotionally watching. They then put on Tefilin, heard words of encouragement from the Rabbi, and also received Jewish books with Russian translation.

The event was also attended by Chief Prison Chaplain Rabbi Aharon Gurevitch, who is constantly in contact with the prison administrations in Russia. As well, the shluchim who regularly visit this prison to conduct Pesach seders and other similar Jewish activities were also present.