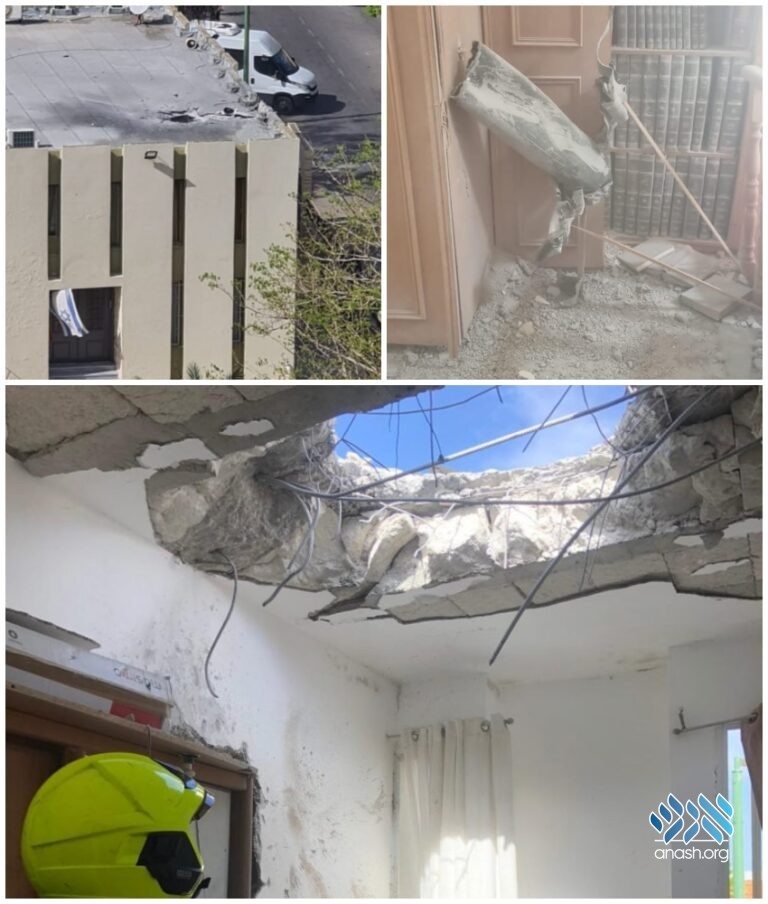 A shul in Ashkelon suffered a direct hit from a Hamas missile causing extensive damage. A 55-year-old man was killed in his home in Ramat Gan when a rocket fell just outside his house.

The IDF dropped hundreds of bombs overnight on the Hamas underground tunnel system in Gaza as Hamas continued firing rockets all through Motzei Shabbos and Sunday targeting border communities in the south.

Israel launched at least 150 strikes on Gaza overnight targeting underground tunnels and the home of Hamas leader Yahya Sinwar in Khan Younis, his brother and those of other senior members of the organization.

A shul in Ashkelon suffered a direct hit from a Hamas missile causing extensive damage, while a private residence was struck by a rocket in Ashdod. There are no reports of injuries in either incident.

A 55-year-old man was killed in his home in Ramat Gan when a rocket fell just outside his house.

10 Israeli civilians have died since the latest round of fighting began. In addition to the casualties, 294 Israelis have been injured as a result of rocket fire, of which 101 were wounded by shrapnel and another 181 injured while running to bomb shelters throughout south and central Israel.

Prime Minister Benjamin Netanyahu said the fighting in the Gaza Strip — now in its seventh day — would “take more time” and touted the support from the United States and other countries.

In his call with Netanyahu, President Joe Biden expressed his “strong support” for Israel’s campaign but raised concern about civilian casualties and protection of journalists, the White House said.

Israel shared intelligence with the US showing that Hamas operated inside the same Gaza building which housed the offices of the Associated Press and Al-Jazeera. The IDF international spokesman said Israel will publicly release th evidence soon.

Just hours before the start of Shavuos, another terrorist vehicular attack was reported near an entrance of the Old City of Yerushalayim.

The ramming attack occurred outside of the Old City’s Damascus Gate, on the edge of the Sheikh Jarrah neighborhood. Six Israeli police officers were injured in the attack, according to initial reports.

Israeli security personnel stationed near the Gate opened fire on the terrorist, neutralizing him.