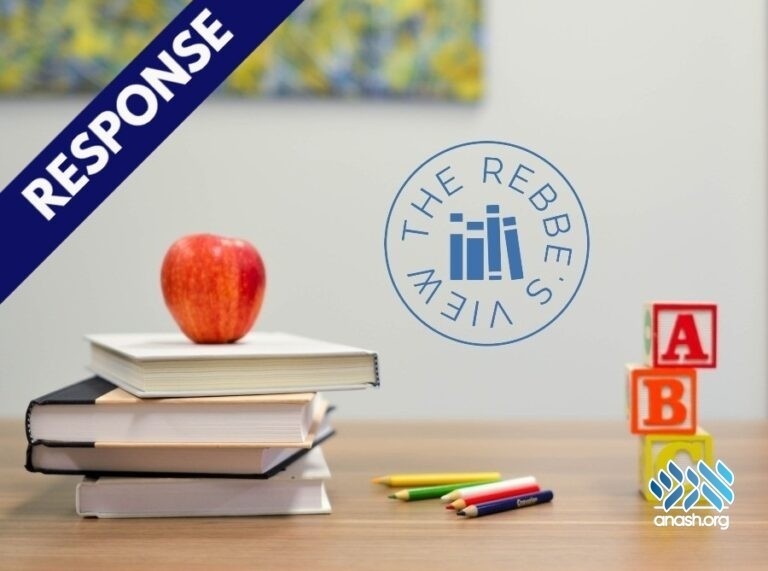 A recent article on Anash.org explored the Rebbe’s view on the study of secular subjects. What about teaching our children to read and write English? Rabbi Shimon Hellinger weighs in.

A recent article on Anash.org explored the Rebbe’s view on the study of secular subjects. As all Chassidim know, the Rebbe called for providing children with pure Torah education and opposed any kind of secular studies. Yet, while the sources are clear, the topic is still the subject of confusion, and many have difficulty absorbing the Rebbe’s words.

One question that constantly comes up is which subjects are included. Are pareve subjects such as geography or geology included in the injunction against limudei chol? What about reading and writing English?

To answer this question, we must understand what “chochmos chitzoniyus” is and what makes it problematic. Then we can consider to which subjects it applies.

Due to a widespread ignorance about the underlying issue with secular studies, it is often applied in bizarre ways. Schools might not teach students ABC, but they will teach math (“cheshbon“). Parents might not teach their children secular subjects, yet they may expose them to world news, “kosher” videos, or online nonsense.

The core message of Chassidus is that “ein od milvado,” nothing exists besides Hashem. Our task is to recognize that truth as much as we can, and at least to appreciate that there’s nothing of importance besides Torah and mitzvos. Chochmos chitzoniyus, however, explains the Alter Rebbe in Tanya, undermine our faith in Hashem by highlighting other things in this world as real and significant.

As Chabad chassidim, we recognize the power that the mind yields over our emotions and our life, which is why we use it to connect to Hashem through the study of Chassidus. The ideal of Chassidus Chabad is to saturate our mind and consciousness with the Hashem’s reality. Learning chochmos chitzoniyus and compromising our faith in Hashem is shooting ourselves in the foot and going against everything we’re trying to do.

In highlighting the role of a healthy head, Chassidim would say that when a person is unwell, but his head is healthy, he will be okay. Another metaphor they used: When a person is struggling in water, so long that their head is above water, they stand a better chance of being saved.

The Rebbe, shepherd of faith of our generation, was troubled by the destructive trend of exposing young children to ideas that would dampen their passion for Elokus. On numerous occasions, the Rebbe addressed it strongly and tore down each of the arguments put forth on why children must study those topics.

Of course, the problem with chochmos chitzoniyus applies to adults as well, yet the issue is much greater when dealing with impressionable children.

First impressions shape your attitude for the future. When a child is raised with the simple truth of Elokus, then even if they are faced with challenges later, they have what to fall back on. But if a child is raised with a mindset that there is a reality outside Hashem, then even if they relearn to think differently through learning Chassidus, that early impression must always be fought against.

While adults are compelled to enter the big wide world, there’s no reason to do that to pure children. Moreover, adults have been fortified with a solid upbringing and knowledge of Chassidus. Young, impressionable children, on the other hand, must solidify their outlook before it can be challenged. (This is all besides the special holiness that children have – breath without sin, “meshichai” – that should not be compromised.)

Take for example this description by R’ Sholom Mordechai Rubashkin of his upbringing and how it helped him withstand his difficult saga (from his book):

“Instead of busing us to Crown Heights, my parents sent my brothers and me to local schools in Boro Park. Up until the sixth grade, I was sent to the Karlin-Stolin yeshivah on Fourteenth Avenue. Guided by the Lubavitcher Rebbe’s position on secular studies, my parents arranged for us to leave school at two o’clock, when those studies began. My father made this decision despite his involvement in the world of business, where such studies are claimed to play a role in success, once again teaching and demonstrating to his children that success is really only from Hashem.

“At two o’clock every day, my brother Moishie and I walked the few blocks to the Kopyczynitzer beis midrash, where we learned Torah with the Kopyczynitzer Rebbe’s gabbai until the end of the day. This insulation from secular ideas and perspectives during my formative years stood me in good stead throughout my life. As Rabbeinu Bacheye writes, exposure to these ideas is one of the mafsidei bitachon—things which undermine proper trust in Hashem.”

Once we understand what the issue is, it follows that the more a subject pulls a person away from faith in Hashem, the more problematic it is. Thus, science and history – which discuss “forces of nature and society” – are more harmful to emunah than math and English.

Yet, the Rebbe spoke against teaching English as well. What could be wrong with a language?

In the famous Simchas Torah farbrengen, the Rebbe described parents who are embarrassed that their child is old-fashioned in both dress and speech. These were European parents who wanted their children to become more modern and fit in with society.

The Rebbe spoke passionately about how one must be proud of one’s Yiddishkeit and not be ashamed of general society. All that matters is Torah and Yiddishkeit, and a person can be complete without knowing anything else. With that attitude, parents wouldn’t be bothered if their child speaks Yiddish fluently and “English with an accent.”

Ideally, children should be taught to speak Yiddish and write properly in both Yiddish and Lashon Kodesh. However, if for whatever reason, a child cannot learn Yiddish or Lashon Kodesh, there’s no question that he must learn to read and write in the language that he knows. This is not about “making it” in life or learning about the world, but simply a tool.

As Harav Yosef Heller of Crown Heights told this writer explicitly: a child who cannot write is a “handicap.”

Because the term “English” has been used by many in reference to limudei chol, it has received much of our attention. Instead of appreciating the inner meaning of raising children al taharas hakodesh, some think it’s all about ABC, while sometimes comprising children’s taharas hakodesh with other detriments.

Of course, a person can fool himself and argue that every study of secular subjects could be used for avodas Hashem. But an honest person can know what is truly for Hashem and what is just an excuse.

Use this as the deciding question: Would you be happy with your son growing up to be like R’ Mendel Futerfass or R’ Itche der Masmid who were steeped in Chassidus and couldn’t speak English?

If that is indeed our wish, and our children know that too, then the study of the English alphabet will be no different than learning to hold a pencil – a small medium to facilitate their avodas Hashem. With that mindset, we can teach them just to read and write holy material – Torah and sipurei tzaddikim – without seeking to “broaden their knowledge.”

By raising our children to live with Moshiach, as the Rebbe explained that all they know is Elokus, we should merit the geulah very soon!