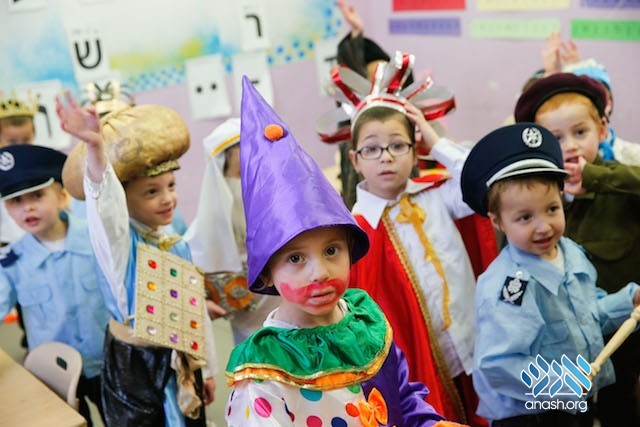 Ultra Orthodox Jewish boys dress up in a costumes as part of Purim's Holiday tradition, at the "Talmud Torah Ohalei Menachem" school in the ultra orthodox Jewish settlement of Beitar Illit. February 20 2013. Photo by Nati Shohat/Flash 90.

One time, we went to a PR professional to think up a nice marketing twist for the brochures, and came up with the following title: ‘Is Purim more like Halloween or Yom Kippur?’ The point was that it’s more like Yom Kippur.

The Rebbe was very unhappy that we had even considered writing this.

We had written that the brochure was edited by a few individuals. The Rebbe circled the word “edited” and added (free translation):

?? !! Could it be that all those people aren’t bothered at all by the “combination” R”L R”L of the two abovementioned?

It is obvious that they should now destroy the brochures after first removing what they were particular to begin (fulfilling the instruction of the Sefer Chassidim) with ב”ה.

From A Chassidishe Derher magazine.