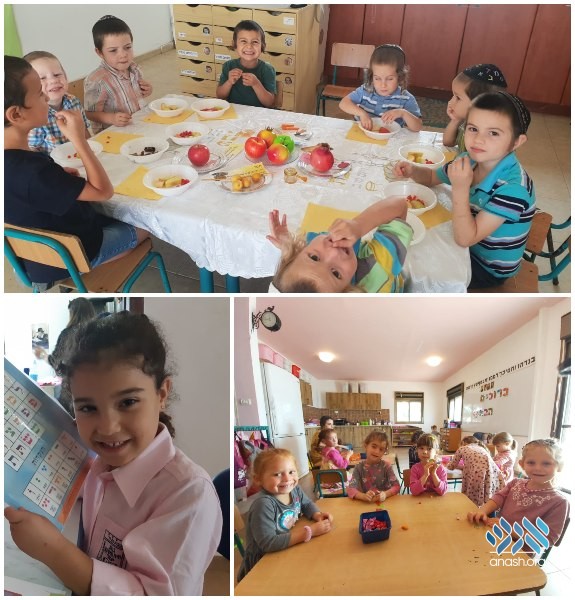 Every morning, children in the Chabad community of Yitzhar would make the perilous half-hour trip through Arab villages to attend the Chabad kindergarten in Itamar. Now they are trying to build a school of their own.

A morning that excites every parent of kindergarten or elementary school children is the first day of school.

We had an especially exciting day in Yitzhar.

This year we had the opportunity to open the year at the Chabad School in Yitzhar with 23 children, from first to fourth grade girls and first and second grade boys.

But the big miracle of the year is that 18 children finally got to attend the new Chabad preschool in Yitzhar after years in which our children had to be bussed to the Chabad kindergarten in Itamar, half an hour drive through the entrance to Palestinian Shechem.

“Every day my son would board the ride to kindergarten, my heart would tremble with fear. It did not reassure me that there was a driver who is sensitive to small children and who has a gun,” says S., a resident of Yitzhar.

One afternoon we received a message from the administration that everything was fine. The children ‘only’ saw the terrorist running, but everything is fine. The driver calmed them down and gave them water.

“This message did not calm me down at all, I was just stressed to find out that my child at the age of 3 witnessed a stabbing attack on the way back from kindergarten… With all the sacrifice to send the child only to Chabad, its hard”.

Thank Gd, the Chabad community in Yitzhar grew. The number of children is respectable, but we are not big enough in order to open fully accredited and budgeted institutions. We currently have only about 6 children in each age group, both boys and girls.

So getting the budget approved for the institutions is almost an impossible task. With great effort, and in light of our security situation, we were able to submit an exceptional request for funding.

But it is still being examined, and in the meantime the staff salaries have to be paid from somewhere.

“Our school is completely shlichus, 50% of the children in the institutions are children from outside of the Chabad community who receive a Hasidic education that does not exist anywhere else in the area”, says H., an educator in one of the classes.

“The truth is that the head of the education department took the time to agree to approve our opening a Chabad school here”, the principal explains, “and the permits are still needed. Most of the schools here are national religious, like most of the people living here. Suddenly he is approached by a group of Chabad parents who operate a school that is Chassidic and charedi, which has never existed here before. And one with very small classes”.

Almost a year ago we gathered all the Chabad parents from Yitzhar who have kindergarten children. We discovered that we were already a group of 17 boys and girls of kindergarten age. Together we decided it was time to save our tender children from the difficulty of traveling.

There is no reason that in the world to expect that almost 20 children, aged 3 to 6, should go out every day on the dangerous trip.

We started working hard to open the Chabad preschools in Yitzhar and did not imagine how many difficulties we would encounter along the way.

We faced threats that if a Chabad kindergarten was opened in Yitzhar, all of the permits we worked so hard to obtain for the school would be canceled.

At the time that we should have been dealing with the organization of the institutions to open the year, we found ourselves in repeated meetings with many different authorities so that the school would not be harmed and all of the institutions would be approved for at least a partial budget.

We are still in the midst of a struggle for our children’s lives, for their security. And on their right to receive Chabad education near home.

And in practice? The institutions themselves operate normally, thank G-d.

We opened the preschool from zero, collected furniture from schools all over the country, and games were donated by parents.

The team lined up for the big mission, knowing clearly that they are entering work in institutions whose budgets are not yet clear if and when they will arrive. And that their livelihood depends on people’s contributions.

And here I want to contact you to join us in the great mission.

When I took on the responsibility of obtaining the funds for the institutions in Yitzhar, I trembled with fear. I knew that if I did not succeed in the job, the team that relied on my promise would have nothing to buy bread and milk for the children.

In the first month of last year I was able to achieve with tremendous efforts almost the entire amount. We were short ‘only’ three thousand NIS. I wrote to the Rebbe begging him to help.

This is his institution and I took on this responsibility that the Rebbe demanded. In the answer I received, the Rebbe reprimanded an emissary for lack of confidence and joy.

I realized that I was left to just believe out of joy that the money would come…  The night before the salary had to go out to the team, a dear man knocked on our door and brought me an envelope with cash, a donation to the school.

Inside was exactly the missing 3,000 NIS.

When I wrote to the Rebbe an excited thank you for the miracle, the answer opened with a letter in which the Rebbe writes to a man appointed by the Rebbe to raise funds for institutions. The Rebbe tells him that if the Rebbe imposed a mission on a chassid, he gave him the powers to succeed in that mission.

I did not expect clearer answers than that.

And also this year, 5781, when we need the not-insignificant amount at all each month, 80,000 NIS, in order to cover the budget of the institutions, this letter accompanies me.

It is clear to me that only the chassidim of the Rebbe need to be found to support the institutions, which are so vital, this year.

If you feel that it’s fitting, join us and help maintain the institutions in Yitzhar this year.

We have one last week, until Yom Kippur to raise the entire amount for salaries of the coming month.

We have already reached almost a quarter of the amount required in automatic payments.

And the more donated in standing orders, eliminating the need to chase after new donations every month, we will be more successful in the struggles for approvals and budgets from the Ministry of Education

And in increasing enrollment in our institutions

In the attached link there are options for donation and it is of course also possible to donate by monthly automatic payment.

And in the amount, enter the amount that you wish to donate each month.

Thank you, on behalf of all the children and parents of the Chabad Yitzhar community and their associates

Click on the link below to send your donation: