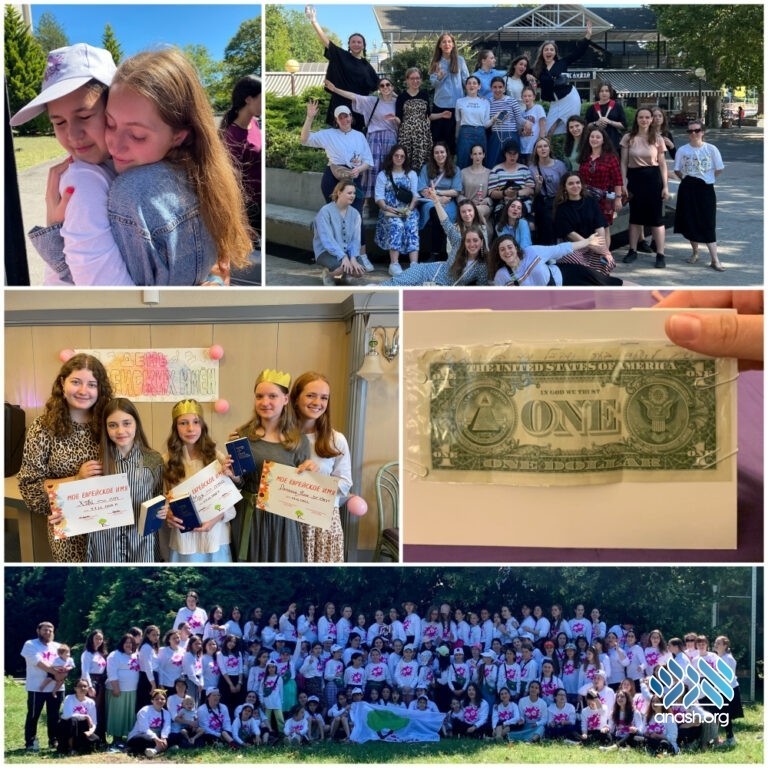 Staff at camp Yeke made a shocking discovery about a Rebbe Dollar they were about to raffle off among their campers. The realization led the winner of the raffle to be overcome with tears as she collected her prize.

Summertime, usually the season to recharge and enjoy, brought a new challenge to Ukrainian refugees. Although physically safe from harm, home and all that is familiar are extremely far away. For the Yeka campers, this is indeed the case. Many of them are safe in Israel or scattered around Europe but as summer was approaching the question grew in their minds, what are we going to do?

Throughout these difficult times, Camp Yeka Girls has made it a priority to support their girls wherever they find themselves, including facilitating escape from Ukraine, financially supporting families in need, organizing flights, sending large shipments of supplies; and more. In addition, Two dedicated staff members spent three months in Berlin, dedicating themselves to the children stranded there. Their trademark slogan is: “Yeka is family”. Wherever and whatever is needed, they are there for the girls.

Over Pesach, Camp Yeka Girls pioneered their very first Pesach camp in Israel for the girls who had fled there. Thanks to a partnership with Chabad B’Aliyah, the unimaginable took place.

The goal of Yeka Girls Pesach Camp was to create a safe haven of familiar faces and songs, to bring a taste of home to the girls, surrounded by their favorite staff to truly experience the joy of Yom Tov. The sense of familiarity that camp had was a calming support in the midst of all of the disruption and trauma they were experiencing. The love, warmth, and fun of Camp Yeka are irreplaceable, and during these turbulent times, more necessary than ever.

The day Pesach camp started, the staff was struck by the girl’s dejected and low moods. “You could see on their faces that they were going through some sort of trauma, the atmosphere was so heavy. Then a day or two later it was like they had come alive again”, said Fraidy Theler, a dedicated staff member.

One camper, Eva, shared that she was struggling because of the language difference in Israel. She didn’t speak Ivrit and amongst the chaos of escape and a new life, she was left grappling with a major language barrier. “I feel so free to be here with my friends and I know what is happening around me all the time because we all sound the same,” she told her counselor.

On the heels of a successful Pesach camp and with the upcoming summer, Mrs. Menucha Hanoka, Mrs. Hindy Levy, and all the volunteer head-staff of Yeka Girls made the decision to reach even more of their campers during the summer by opening both a European location as well as an Israel location.

For the last two weeks over 90 Ukrainian girls gathered at a Hungarian campsite on the waters of Lake Balaton. Girls arrived by bus or train from Germany, Vienna, England, Georgia, Austria, Poland, and even from within Ukraine itself. Staff flew in from all over the world having fundraised to be a part of this tremendous shlichus, loaded up with clothing, treats, activities, games and so much love. The camp exploded with happiness as classmates, cousins, neighbors, and friends were reunited after having fled to different countries.

There were several trips including a trip to a water park and a petting zoo. The usual Yeka “master class” activities were run by professional art and dance teachers. This year they added a therapist to their staff in both camps to talk to the girls and help them with their trauma. Lake Balaton’s beach was closed for the girls in specific places so they could swim and enjoy the beautiful outdoors. With trademark Yeka enthusiasm the days were filled with song and dance, Rebbe time, and Tzivos Hashem.

A new program was started for girls who were too old to be campers this year as well. Yeka Girls hired Rabbi and Mrs. Borodkin from Dnepr to give this group a summer experience they would never forget. Including JLI classes, boating, biking, water parks, caving, and more. They had specialized late-night farbrengens and were left with a deep feeling of belonging.

The last night of camp ended with a shocking discovery. When Esther Miriam Golomb and Raizy Leitner asked Mrs. Sternberg to donate a Rebbe dollar to be awarded to one of the girls at the camp banquet. It was the main prize of the raffle for the girls who had kept their hachlata taken on the first night of camp. Incredibly, the date written on the dollar was the very same night of the banquet, Yud Gimmel Tammuz. The winner of the raffle was in tears as she collected her prize, fully understanding the momentous moment and the prize she received.

The Yeka staff have now packed up in Hungary and made their way to Kfar Chassidim in Israel to receive 143 campers. With the difficult economical situation and the expense of two camps in countries much more expensive than Ukraine, Yeka Girls have heavy bills to pay and are asking, for support in this precious shlichus.

If you can donate even a small amount to ensure that the camp in Israel can come to full fruition, you will surely make a tremendous impact. Running three camps in the space of four months has drained Yeka Girls more than ever before and yet the need is greater and more pressing than ever. Please donate today and be a true partner in illuminating the lives of these precious neshamos.