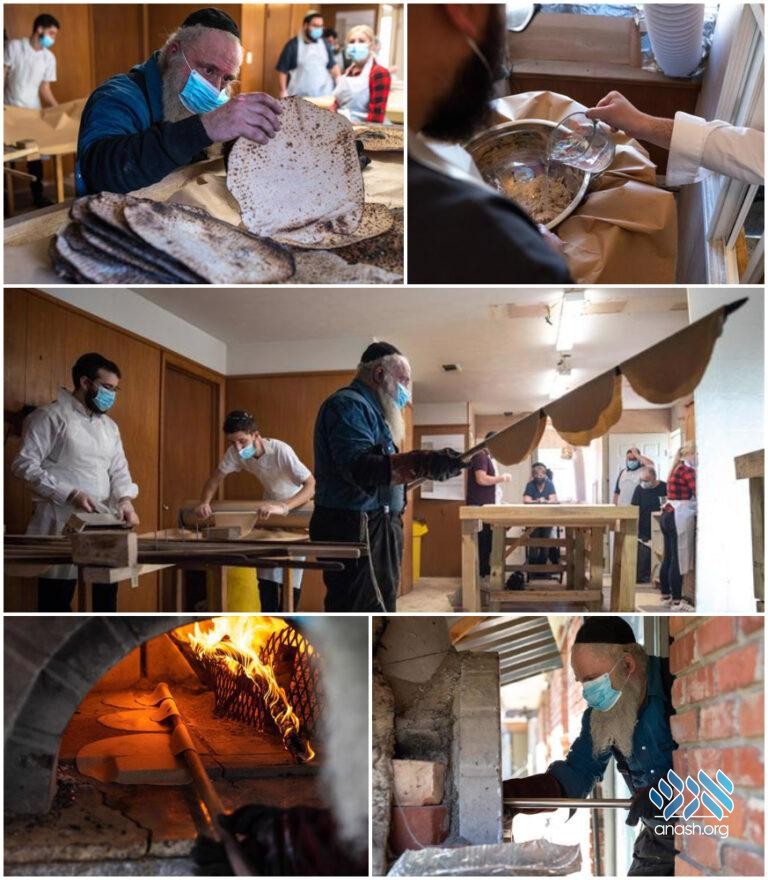 After decades of handmade Matzah bakeries being exclusive to the East Coast, Texas shliach Rabbi Dov Mandel decided to try his hand at producing his own matzah – and it’s going better than expected.

Every morning at 7 a.m., workers stoke the embers burning in the matzah oven from the night before. Slowly, they feed crisp, dry firewood into the growing flames. Two hours later, the oven has reached 1,300 degrees, perfect for baking shmurah matzah.

That’s when the real work, all done by hand, begins: The flour and water is mixed, dough kneaded, and then divided up and rolled into thin, round discs. Once, twice over with a hole puncher and then straight into the oven’s gaping mouth. The matzahs bake in less than 30 seconds, emerging from the flames blackened and smoking. Everything must be done carefully and swiftly, for according to Jewish law each matzah run—from the mixing of the dough to the baking of the last matzah—must be completed within 18 minutes.

You’d be forgiven for assuming this scene is unfolding in New York or Israel, but it’s not; it’s all taking place in Fort Worth, Texas. The brand-new Texas Shmurah Matzah Bakery is the only one in North America outside of Montreal and the greater New York area, and though still in its pilot stage, it’s already making its mark. By the time baking winds down a few days before Passover, some 3,000 pounds of handmade shmurah matzah will have been produced in the Lone Star State, a small amount compared to the commercial bakeries in the Northeast, but enough to significantly boost the shmurah matzah supply throughout the region.

The pioneering matzah bakery is the brainchild of Rabbi Dov Mandel, who co-directs Chabad-Lubavitch of Fort Worth and Tarrant County with his wife, Chana Tovah. Mandel’s interest in such a consuming project was multifold. He realized that he and his fellow Chabad emissaries in the area were spending crazy amounts of money just in shipping. At the same time, he thought perhaps he could even bring down the price of the matzah itself. But it wasn’t only that: There was something about tackling so raw and natural a Jewish experience that drew him in.

“I have always taken an active interest in sacred Jewish practices,” says Mandel. “I studied to become a scribe, mohel and shochet, and I try to take every opportunity to learn how to do something myself.” Though he is not a practicing mohel, in the last few years Mandel expanded his knowledge of shechita—kosher ritual slaughter—from just poultry to beef as well.

The laborious, highly technical and time-honored work of baking handmade shmurah matzah appealed to him, and in anticipation of Passover 2020, he got to work. Mandel needed an oven strong enough to withstand the high temperatures required to bake matzah, so he purchased a pizza oven made of refractory cement. Next, he found an area farm that produced wheat of a suitable moisture for matzah flour and ground about 1,000 pounds of grain into flour. Just as he geared up for what would have been his trial run, Covid hit, effectively shutting down the project.

At the end of 2020, as the pandemic eased up and a light appeared at the end of the tunnel, Mandel was determined to try again. Though not without obstacles and learning curves, the project has been a resounding success. In order to whet the appetite for the big night of the first seder, a common custom is to not eat matzah for a period before Pesach begins. But Mandel and his staff of 10 or so got the chance to try it during their first weeks of baking.

Mandel doesn’t hesitate to judge the fruits of their labor. “It looks beautiful, and it’s delicious,” he says.

In the first years after World War II, handmade shmurah matzah was a rarity even in heavily Jewish New York City, a niche religious food produced and procured by just a select few.

While matzah had been handmade and round for millennia, the dawn of the industrial age had changed that. In the mid-1800s, enterprising Jewish bakers realized they could mechanize matzah-baking, a process perfected at the turn of the century by Dovber Manischewitz. “American matzahs,” as they were often called in pre-war Europe, could be mass-produced and were significantly cheaper than the handmade variety. Of course, dough fed through a much more efficient machine rendered each matzah square, but over time people got used to it. Machine matzah was especially useful during times of emergency, when Jews for whatever reason could not bake shmurah matzah locally, as they had in previous generations.

(The word shmurah means “guarded” and refers to the constant care that is taken, from the moment the wheat is cut until the matzah is baked, to ensure that it does not become chametz. Like handmade matzah, machine matzah can be made from shmurah flour, although not all of it is.)

Machine matzah was nearly universal in post-war America, produced in massive multi-story factories. Meanwhile, just two small basement bakeries on New York City’s Lower East Side produced the classical variety for a tiny clientele of mostly Chassidic Jews, the survivors of a community utterly decimated by the Holocaust. Handmade shmurah matzah was in danger of extinction.

This began to change in the spring of 1954. Speaking a few weeks before Passover in his synagogue in Brooklyn, N.Y., the Rebbe charged Jewish communal leaders with a new responsibility. In the old country, the Rebbe explained, rabbis had supplied their communities with matzah. Back then, this was a source of income for the often impoverished rabbi. At the same time, because Jewish laws surrounding the baking of matzah are extremely complex, this was a way for the community rabbi to ensure that the men and women he served had proper, kosher matzah for their seder.

“I ask—and if I had the power, I would instruct—that this custom be brought back,” the Rebbe said, “and that rabbis should send shmurah matzahs to their congregants.” But not only rabbis—anyone with the ability to influence their surroundings ought to share matzah with their friends and neighbors, enough for them to enjoy at the seder. And not just any matzah, but specifically round, handmade shmurah matzah—the same exact type of simple matzah their ancestors had once eaten on the hallowed nights of Passover.

Matzah, according to Kabbalah, is intimately connected to faith, the very foundation of what it means to be a Jew. The Rebbe tasked his listeners with reaching out to every Jewish man, woman and child and through matzah, which the Zohar calls the “Food of Faith and Food of Healing,” connecting them with their heritage and birthright.

In the years following the Rebbe’s call, the rapidly growing legions of Chabad emissaries worked for months before Passover distributing handmade shmurah matzah. Passover educational programs in schools and Jewish community centers introduced the ancient bread to countless adults and children, and over time, shmurah matzah has become a widely recognized and beloved essential of the Passover season. Today, even Manischewitz, the original populizer of the square machine matzah, produces handmade shmurah matzah under its own label.

Like his fellow emissaries around the world, Mandel in Fort Worth would annually bring in huge shipments of shmurah matzah to his corner of Texas. After thinking and planning for some time, this year he finally got the chance to take it a step further.

The last six weeks have been hectic for Mandel, and he has only small pockets of time to speak by phone. An ideal time to reach him is on his car ride to Jewish community member Monica Odesky’s 39-acre ranch outside of Fort Worth, where the rabbi heads once or twice a week to fill up on the natural well water required for shmurah matzah baking.

“I need between 7 and 7.5 gallons of fresh well water every day,” Mandel says as he heads back from the ranch with 40 gallons of water in his trunk. A day earlier, he had dropped by another friend’s place to chop more firewood for the oven.

“You need well-seasoned firewood—seasoned meaning just sitting out in the sun and completely dried out,” he explains. “You go through a lot of firewood over a period of six weeks.” He’s already gotten his own log-splitter and will begin stockpiling firewood for next year early this summer. “You learn everything as you go.”

The project hasn’t been without hiccups. The first week of matzah was basically experimental, and the team at the bakery kept tinkering to get it just right. Some of it has to do with the Texan climate; if it’s too humid one day, the dough might get too sticky, and the proportions need to be adjusted.

Then there was Texas’s once-in-a-century deep freeze in February, when the Texas Shmurah Matzah Bakery lost power and a week of production time. On the flip side, Mandel was able to return Odesky the favor of her help. Her ranch had no electricity and thus no running water, so the rabbi delivered firewood to her for heating, and gallons of her own fresh well water—all of which he had only because of the matzah-baking enterprise.

Mandel persisted, though, and each day the blocks around his Chabad center are filled with the earthy scent of fresh, baking matzah.

This year the rabbi purchased shmurah wheat flour from a mill in the Northeast, but in a year or two, he hopes to further bring down the price and localize his matzah by harvesting from an area farm.

“We’ve been learning the ropes so I look at this year as a practice run,” says Mandel. “Still, we’ve broken even and have brought the price down significantly.”

In the big picture, however, it’s not about price or convenience or novelty, he emphasizes. It’s about demonstrating that Judaism is alive, an experience that does not ignore its surroundings but elevates them.

“Locally, people are excited about this,” he says. “There’s this interest in handmade shmurah matzah because basically every component comes from here and their friends are baking it. Who doesn’t want Texas-style shmurah matzah?”