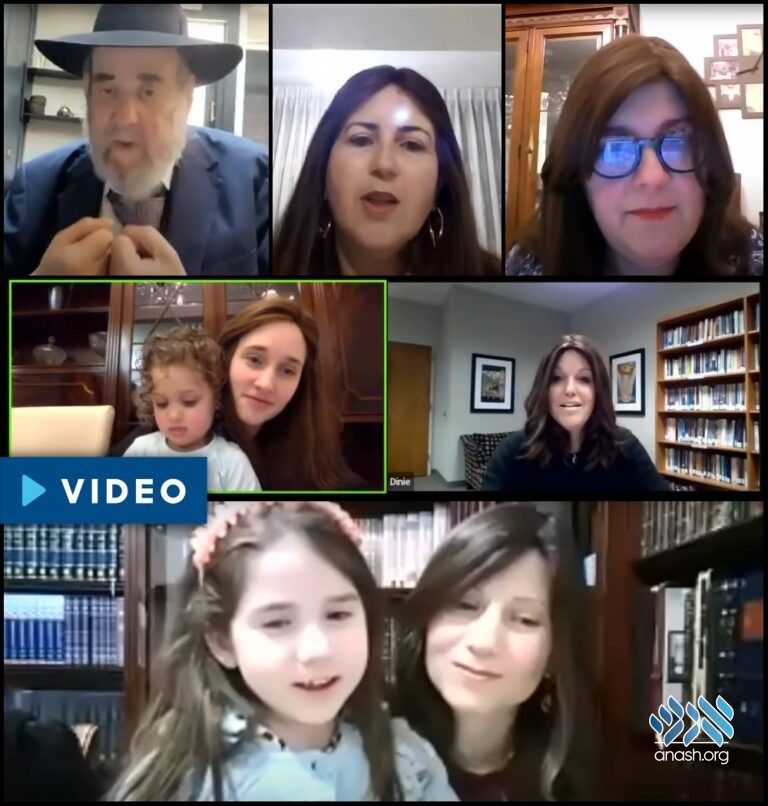 In a powerful display of Jewish unity, thousands of women gathered to pray and support their fellow brothers and sisters in Ukraine, reciting Tehillim and hearing from shluchos on the frontlines of life-saving operations.

Six shluchos, holding back tears and overcome by emotion, each led the crowd in a chapter of Tehillim before relating their first-hand experiences in the trenches of the war in Ukraine. They told over harrowing details of their efforts to bring each and every Jew to safety, with the many difficulties and dangers involved.

Mrs. Chaya Wolf shlucha to Odesa, Ukraine, described the daunting task of transporting twenty young orphans in her family’s care, over the border to safety. “There is a one-month-old baby, which her mother left with us. We don’t even have her original birth certificate or other papers necessary for travel. This is just one of the many challenges. We experienced open miracles, and boruch Hashem, all the children are safely on their way, through four countries, to their new home in Germany.”

The incredible emuna displayed by the women was highlighted by the singing and home art and crafts of a young eight-year-old shlucha, Sterna Sara Levitanksy. She has used the song, about trust in Hashem and never being alone, to comfort herself as she hides in the bunker in her home, loud explosions shaking the house above. The striking image deeply moved the virtual crowd.

The program was focused on Torah, Tefilla and Tzedaka, the three pillars upon which the world stands. With so much instability and uncertainty around the world, the Rebbeim have taught that it is our foundation we are to lean on for support. While they came to provide comfort and prayers to those in Ukraine, the women found themselves profoundly affected by the incredible tales of dedication, emunah and modern-day mesiras nefesh they had heard.

“During a similar crisis, I was a young bochur at the time, and I asked the Rebbe what I could do to help,” related Rabbi Moshe Kotlarsky, vice-chairman of Merkos L’inyonei Chinuch. “The Rebbe explained to me that ‘Kol Yisroel Areivim Zeh L’zeh, all Jews are interconnected. When you say Tehillim, when you learn Torah or give Tzedaka, wherever you are, it has an immediate positive impact on those in danger.’ There is no doubt we have accomplished great things together for the Jews in Ukraine”

Seeing their sister shluchos in distress, fellow shluchos led by Mrs. Dinie Rapoport of Mequon Wisconsin were inspired to initiate the gathering. Turning to the Moshiach Office, the staff at Merkos 302 helped the program quickly come to life. Thousands joined live, hailing from hundreds of locations. Nearly 10,000 women have since viewed the recording online.

The Zoom has sparked several similar Zooms the past few days. In varying locations, languages and demographics, people have come together, to pray, study Torah, and strengthen each other in these frightening times. These gatherings are part of a larger campaign by Merkos’s Ukrainian Jewish Relief Fund, a unified Chabad response to the crisis in Ukraine. Its many aspects include coordinating rescue operations as well as raising funds.

Mrs. Rochie Levitansky, a shlucha speaking from war-stricken Sumy, Ukraine, accompanied by her two young daughters, thanked those that had joined. “Thank you to each and everyone of you. Thank you for all the Tehillim that you are saying.” Choking back tears, she vowed to stay and continue helping others as long as she can.

“Each word of Tehillim that you say for us, creates a protective angel for us. And we feel it. Those angels are surrounding us, and because of them, we are seeing miracles all around us. Please don’t stop!”

Update: Baruch Hashem, with open miracles, the Levitansky family escaped Sumy and are on their way to safety—a testament to the power of the Tefillos said for them.