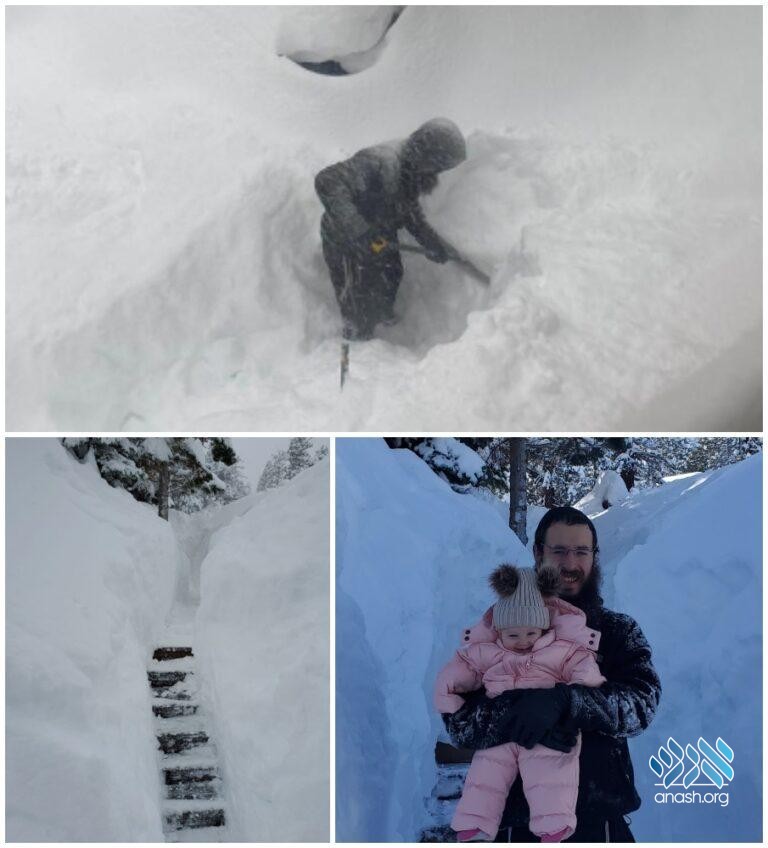 Despite a record ten feet of snow burying the town of Mammoth Lakes, California, shluchim Rabbi Yisroel and Mushky Gordon went ahead with their plans for a Tu B’Shevat event, clearing up the snow after it concluded.

Despite a record ten feet of snow burying the town of Mammoth Lakes, California, shluchim Rabbi Yisroel and Mushky Gordon went ahead with their plans for a Zoom Tu B’Shevat event for the local community.

Rabbi Yisroel and Mushky Gordon moved out to Mammoth Lakes last year, right before the coronavirus pandemic hit. They see to the needs Jews in the region, as well as tens of thousands of tourists who frequent the area for the area’s famous ski resorts.

This Wednesday and Thursday, as parts of the USA were hit with record snowfalls, Mammoth Lakes was buried under a ten foot snowstorm.

Being a ski resort town, Mammoth Lakes is usually well equipped to deal with large amounts of snow. This amount of snow, however, was way out of the ordinary even for them and caused major shutdowns in the area. People were stuck at home for days, and the highways were closed for hundreds of miles.

Despite all the surrounding chaos, the shluchim went ahead with their plan for a communal Tu B’shevat event on Zoom.

“The event was probably the first Chabad event ever to continue as planned in the midst of a major snowstorm,” the shluchim said with a smile.

To donate to Chabad of Mammoth Lakes, visit chabadmammoth.com/donate