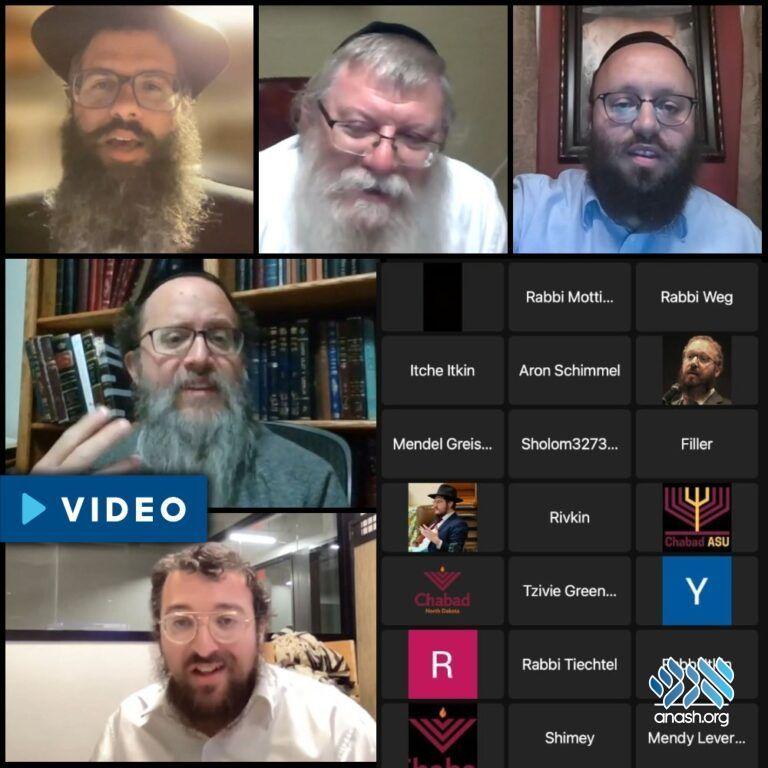 Shluchim from across the Western United States gathered virtually for a regional Kinus Torah, discussing topics and insights that relate to their shlichus.

Shluchim from across the Western United States gathered virtually for a regional Kinus Torah, discussing topics and insights that relate to their shlichus.

Click here to watch a replay of the kinus.

At a recent Kinus, shluchim from across the Western region gathered in in Minneapolis, Minesota, for a Shabbos of unity and chizuk. In keeping with the Rebbe’s instruction that a practical hachlata tova result from every Kinus, they decided to arrange a Kinus Torah geared specifically to themselves.

“The Kinus Torah was an incredible success,” said Rabbi Zalman Teichtel from Lawrence, Kansas, who spearheaded the event. “Shluchim joined from three time zones and each one contributed to the conversation in their own unique way.”

Rabbi Yisroel Wilhelm of Boulder, Colorado shared an insight form the weekly sicha of Project Likutei Sichos. He inspired and encouraged the shuchim to participate in the project, and join shluchim and anash from around the world in studying the same sicha each week.

Rabbi Yitzchak Itkin from Kansas City, Missouri, spoke about the significance of observing Cholov Yisroel and the ramifications of relying on others when it comes to ensuring that the dairy products we consume are under the auspices of a Jew.

Rabbi Mordechai Farkash of Bellevue, Washington, led a fascinating discussion about how a shliach should deal with intermarried couples, specifically when it comes to lifecycle events. He discussed how to treat the non-Jewish father and other laws related to the unique complications and sensitive nature of this situation r’l.

Rabbi Chayim Eliyohu Mishulovin of Portland, Oregon, shared insights on how to approach fundraising and mivtza tzedaka as understood from the Rebbe’s many talks on this topic.

The Kinus then transitioned to a farbrengen led by Rabbi Yehuda Weg of Tulsa, Oklahoma, where he inspired the shluchim to remain committed to their shlichus regardless of the difficulties that may come their way. He specifically focused on the unique lessons to be learned from the life of Rabbi Avraham Levitansky a”h, whose yartzeit was marked on the day of the event, the 10th of Sivan.

As the event concluded in the wee hours of the morning, the shluchim returned to their daily routines invigorated and with a renewed sense of commitment in fulfilling their shlichus, each in their own little corner of the world.