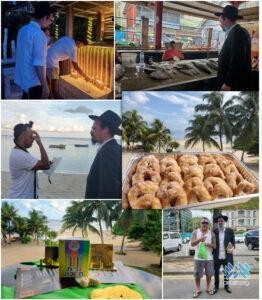 After a request came in to Chabad Headquarters for a shliach to Seychelles Island, Rabbi Mendy Kotlarsky called Rabbi Shlomo Bentolila, and they managed to get a couple to travel to the island for Chanukah as they search for a permanent shliach.

Yet another country is being added to the ‘shlichus map’.

The story began when a request came in to Chabad Headquarters to send a shliach to Seychelles (pronounced “say shells”), an island country in the Indian Ocean at the eastern edge of the Somali Sea. The country, especially Mahé, its largest island, had become a destination for Israelis in recent years, and a shliach was needed to supply them with Kosher food and Yiddishkeit.

Upon receiving the request, Rabbi Mendy Kotlarsky of Merkos 302 immediately contacted Rabbi Shlomo Bentolila, head shliach to Central Africa, including Seychelles Island. The two discussed the possibility of sending a shliach to the country, and agreed to begin the search for a couple willing to become shluchim on the island.

However, in the meantime, Chanukah was fast approaching, and hundreds of Israelis on the island needed menorahs and Chanukah supplies. How could they assure that Chanukah would be celebrated on that island in middle of the Indian Ocean?

Working overtime, Rabbi Bentolila got in contact with Rabbi Mendy and Menuchi Schochet, a couple from Yerushalayim, who were willing to travel to Seychelles on a moments notice.

The Schochets left to Seychelles on Wednesday, arriving just over 24 hours before Chanukah, and immediately swung into action. Parties were planned, word was spread on social media, and Israelis were encouraged to reach out and get their own menorah kit.

Over Chanukah, the Schochets reached hundreds of Jews on the island, supplying them with a little Yiddishkeit on the Island thousands of miles from their home. The beautiful views of the nature almost untouched by human hands added a special dimension to the mitzvos being done there, some for the first time.

As Chanukah came to an end, the couple returned to their home in Eretz Yisroel. Rabbi Bentolila, however, is continuing his search for a permanent shliach to the country.