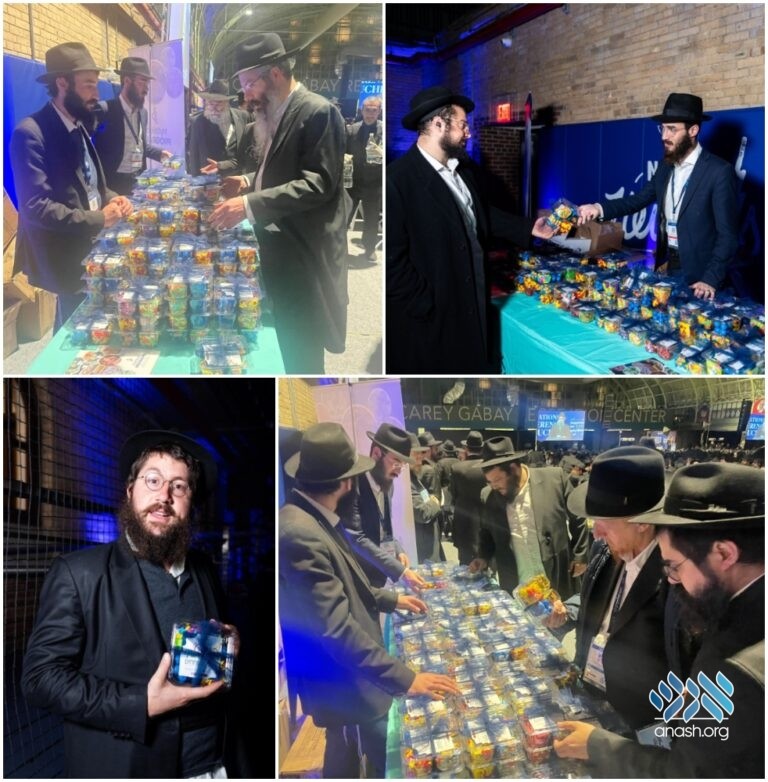 In what has become an annual ritual, a sweet gift awaited each shliach at the entrance of the Kinus Melave Malka: A tasty platter of sweets for their children at home, the Yaldei Hashluchim on the front lines.

The iconic Melava Malka of the Kinus, only open to Shluchim, is known for its candid atmosphere and heartfelt speeches. However, in recent years it has also become the sight of a yearly tradition. A table piled high with an endless amount of ribboned candy platters.

As the Shluchim entered the Bedford Armory this year, they were greeted by a MyShliach Bochur who handed them a box of sweets. The candies were intended for the young Shluchim and Shluchos who couldn’t make it to the Kinus.

The colorful packages were distributed to the shluchim by Merkos 302’s MyShliach department, which constantly innovates new ways to be there for Shluchim’s children throughout the year, furthering their Chassidishe Chinuch that can be so difficult to curate without being in a Lubavitcher Yeshiva or community atmosphere.

Accompanying the platters was a short heartfelt letter to the young Shluchim saluting them for “their tireless efforts and mesiras nefesh.”

“We want you children to know that we are thinking of you and are proud of your work on the front lines, helping prepare the world for the coming of Moshiach,” the note continued.