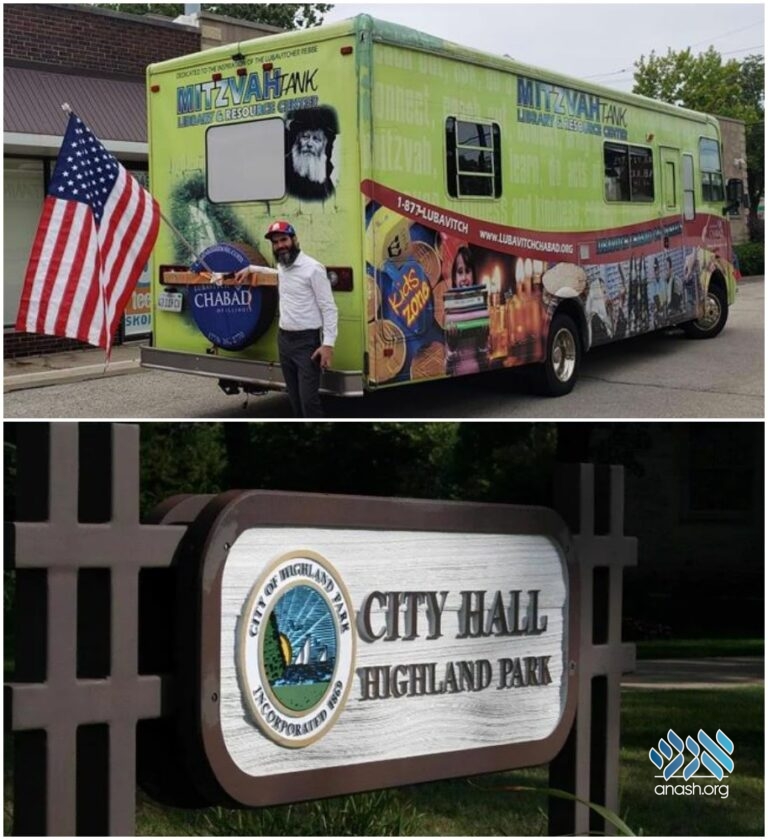 In response to the mass shooting in Highland Park, Illinois on July 4th that killed 7 people, among them 3 Yidden, local shluchim will increase their efforts in bringing mivtza tzedaka and mivtza mezuza to their communities.

In the peaceful suburb of Highland Park, Ill., the wounded and critically wounded are in treatment, and the suspect is in custody. So far, the names of six out of the seven victims have been released.

One is Nicolas Toledo, 76, who had joined his family for the day to attend the parade and was in his wheelchair when he was killed. The second identified victim is Jacki Sundheim, who was a teacher at the nearby North Shore Congregation Israel. “Jacki’s work, kindness and warmth touched us all,” the congregation said in a statement, noting that Sundheim was a “lifelong congregant” and a “cherished member” of the community.

Irina McCarthy, 35, who is Jewish, was killed with her husband, Kevin McCarthy, leaving behind their 2-year-old son, Aiden, who will be raised by his maternal grandparents, Misha and Nina Levberg. Kathryn Goldstein, 64, and Stephen Straus, 88, wbo is Jewish, were also among those killed.

“The community is shell-shocked. We were sitting at a Fourth of July parade as we do every year,” Michla Schanowitz, co-director with her husband Rabbi Yosef Schanowitz of Chabad-Lubavitch of Highland Park, tells Chabad.org on Tuesday morning after a long, sleepless night. “We’re reeling. It’s horrifying that this could happen in our beautiful, suburban community that works hard to serve the needs of its residents.”

“In the spring of 2022, an individual who matches the description of the shooter briefly visited the synagogue,” Schanowitz said in a statement released today. “He entered wearing a yarmulke yet seemed out of place. Upon arriving, he was greeted by our security team, which includes off-duty police officers, and licensed and trained congregants, who observed him throughout. A short while later he departed without incident. We are, of course, working with law enforcement to help advance their investigation.”

In the hours since the attack, the Schanowitzes have been counseling community members around the clock, and the rabbi—also a volunteer hospital chaplain—has been making the rounds through the hospital wards, providing support to people of all backgrounds. Michla Schanowitz says her husband visited a Jewish woman with a gunshot wound to the leg. “People need counseling; there’s fear, sorrow—how do you go on from this trauma? We’re giving assurance, hope and comfort.”

She says the path forward is by bringing more goodness and kindness to the streets of Highland Park, “more light, more mitzvot.”

To that end, Chabad aims to visit all stores on the street and gift them with a tzedakah pushka, or charity box, that they can designate for a cause of their choice. The act of placing coins in a charity box each day fosters an environment of kindness and selflessness, says Schanowitz.

In addition, Chabad will embark on a mezuzah campaign, offering the spiritual protection the mezuzah affords to Jewish homes in the area. Those who already have a mezuzah will have the opportunity to get it inspected, ensuring that the letters haven’t cracked or faded, compromising its integrity.

Amid the stories of heartbreak and tragedy, Schanowitz received a call from a relative whose daughter and her family were at the parade, telling her of a vital Jewish ritual that saved lives on Monday morning: “They were walking closer to where the gunman was,” explains Schanowitz, “and the rabbinical students volunteering for us asked one of them to put on tefillin. He did, and the group then decided to remain right there, just across the street from the Chabad center.”

“As we pray for all the injured and comfort those who lost loved ones or are otherwise suffering,” Rabbi Schanowitz continued in the statement, “let us find solace in channeling our pain into action, transforming darkness into light.”