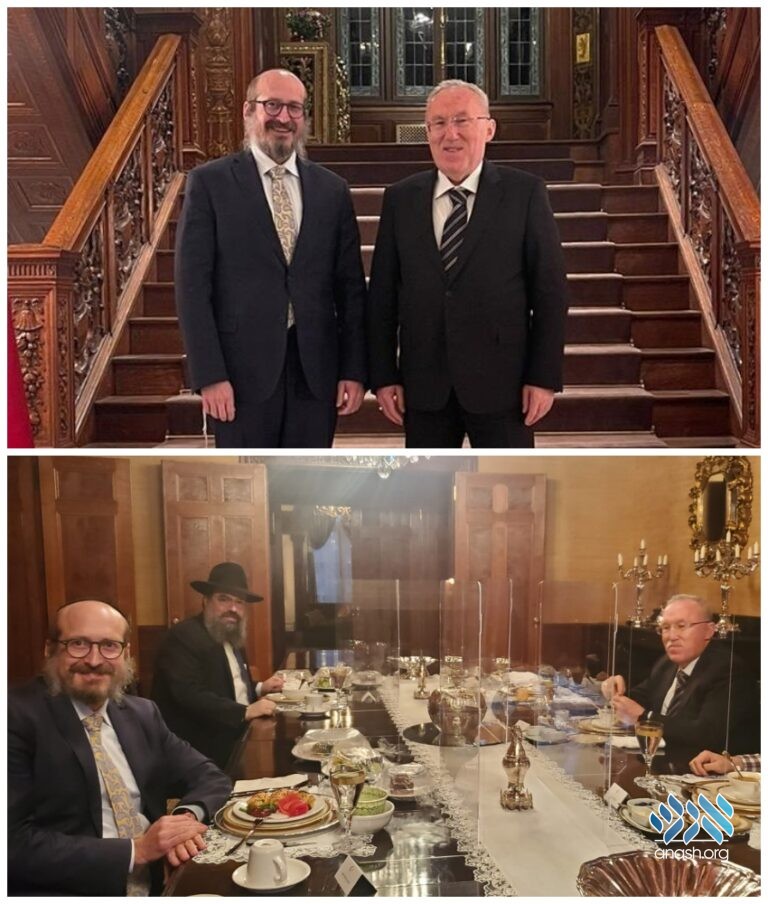 Chief Rabbi of Turkey Rabbi Mendy Chitrik was hosted for a kosher post-Ramadan dinner by the Turkish ambassador to Washington, DC. He was joined by Rabbi Levi Shemtov, of American Friends of Lubavitch.

The Turkish ambassador to Washington Mr. Murat Mercan hosted Shliach Rabbi Mendy Chitrik, Chief Rabbi of Turkey and Chairman of the Association of Islamic Rabbis, for a kosher Iftar dinner at the official residence of the Turkish Embassy.

Iftar is the evening meal with which Muslims end their daily Ramadan fast at sunset. It is ofter an occasion for building bridges between Jewish and Islamic communities, and to promote brotherhood and coexistence between the two peoples.

Joining Rabbi Chitrik was Rabbi Levi Shemtov, Vice President of American Friends of Lubavitch, who counts many foreign ambassadors among his friends and acquaintances.

Following the dinner, Rabbi Chitrik expressed gratitude to the Turkish Ambassador and Turkish people for centuries of peaceful coexistence between Jews and Muslims in Turkey.

“Having a Kosher Iftar with Ambassador Murat Mercan at the official residence of the Turkish Embassy during the month of Ramadan is indeed an example of brotherhood that stems from thousands of years of coexistence of Jews and Muslims in Turkey. Thank you for your hospitality,” Rabbi Chitrik tweeted.