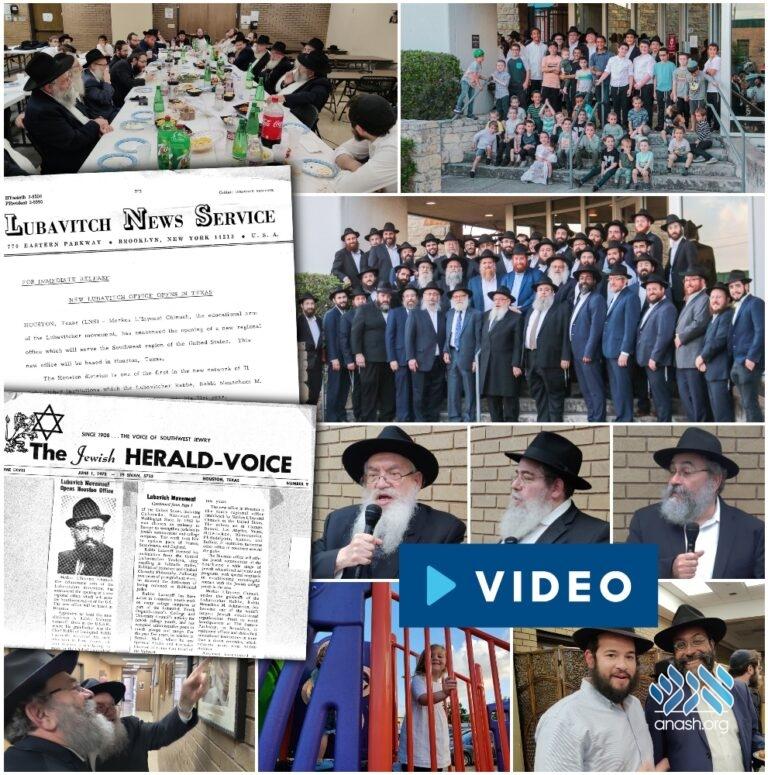 Texas shluchim gathered in Houston on Sunday for a kinus and farbrengen, marking 50 years since the founding of Chabad of Texas as one of the 71 mosdos on 25 Iyar, 5732 / May 9 1972.

Texas shluchim gathered in Houston on Sunday for a kinus and farbrengen, marking 50 years since the founding of Chabad of Texas as one of the 71 mosdos on 25 Iyar, 5732 / May 9 1972.

As reported in the Jewish Herald Voice’s dedicated section in honor of the milestone, Rabbi Shimon and Chiena Lazaroff arrived in Texas 50 years ago with little more than an ambitious Jewish vision and four children in a green station wagon.

Chabad of Texas was established on 25 Iyar 5732, just under two months after the Rebbe’s 70th birthday. During the farbrengen celebrating the milestone, the Rebbe requested the establishment of 71 new institutions, and a press release by Lubavitch New Service noted that the new Chabad branch in Texas was “one of the first in the new network of 71 Lubavitcher institutions.”

“When we got to Houston, people kept asking us, ‘Why are you moving here? What are you going to do here?’” Rabbi Lazaroff told the JHV.

“My older son, Lazer, was 5 years old and would say real innocently, ‘We are selling Judaism.’ And, that was a big hit.

“So, since then, that’s what we’ve been doing – selling Judaism.”

“At first, we thought we should be closer to United Orthodox Synagogues because that was the more observant Jewish neighborhood, but the Rebbe said just the opposite,” Mrs. Lazaroff told the JHV.

“He said, ‘Go where there is nothing. Go to a neighborhood where you would not be in competition.’ He did not want to create differences. Instead, he said, ‘Create your own space and the people will come to you.’”

What started out as a simple minyan in an apartment building, has grown into an organization that teaches, supports and inspires tens of thousands of people in the Lone Star state, with 58 shluchim couples serving 37 branches.

The program began on Sunday afternoon, with a banquet for shluchim, shluchos and their children. Kicking off the banquet was Rabbi Lazaroff, who opened an emotional Shehechiyanu bsheim umalchus, noting that he had checked with a rov and it was ok to do so.

The banquet continued with inspirational addresses from veteran shluchim, and concluded with a roll call, recognizing the shluchim and shluchos from across the Lone Star State.

Shluchim joined their children for a Tzivos Hashem rally, organized and led by Rabbi Shmuly Gniwisch, with snacks, prizes, and an entertainment show. They wrote a letter to the Rebbe together to send to the Ohel, followed by outdoor sports and bouncy houses.

Meanwhile, the shluchos had a farbrengen with Mrs. Chiena Lazaroff, who shared words of inspiration. The women introduced themselves and many shared personal stories.

The shluchim returned later that evening for their own farbrengen, where many shared the impact that Rabbi Lazaroff had on themselves and their shlichus.

“It’s an ongoing thing still. We haven’t touched everyone yet. We are still on the journey,” Mrs. Lazaroff told the JHV.