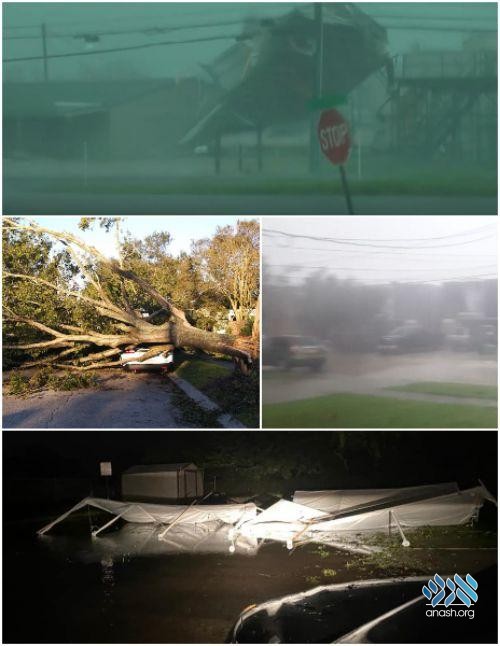 Hurricane Zeta ripped through southeastern states at a strength and speed much greater than what was predicted; baruch Hashem shluchim are safe, though many are without power.

New Orleans shluchim Rabbi Yossie and Chanie Nemes are used to hearing exaggerated media predictions of the havoc impending storms will wreak. So when Hurricane Zeta slammed into New Orleans Wednesday evening with unexpected force, they were taken by surprise.

“The eye of the storm passed right over us,” Rabbi Nemes told Anash.org. “After 100 mile per hour gusts, it was eerily silent – no wind, no rain. I went out with my son to pick up lemons that had fallen from our tree.

“Suddenly, the winds started again and everything was chaos. Our whole neighborhood lost power, huge trees were uprooted, and one of our friends lost part of his roof. The tent we had put up at Chabad for COVID-safe minyanim collapsed. ”

Mrs. Chaya Mushka Ceitlin, who grew up just blocks away from her current home, says this wasn’t her first rodeo. As she watched the howling winds, she was reminded of the scene that greeted her eyes as a teenager looking out the window during Hurricane Katrina.

“The effect on our property was minimal, but we heard reports from others who sustained more serious damage,” Mrs. Ceitlin said. “Thankfully, the shluchim are all safe, and our community is doing okay.”

By morning, the storm had swept through Mississippi, Alabama and Georgia, leaving in its wake thousands of fallen trees, hundreds of blocked roads and 2 million without power.

“We’ve experienced worse, but it’s almost never as bad as the newscasters predict,” Mrs. Ceitlin mused. “I didn’t know it was possible for them to underestimate a hurricane!”