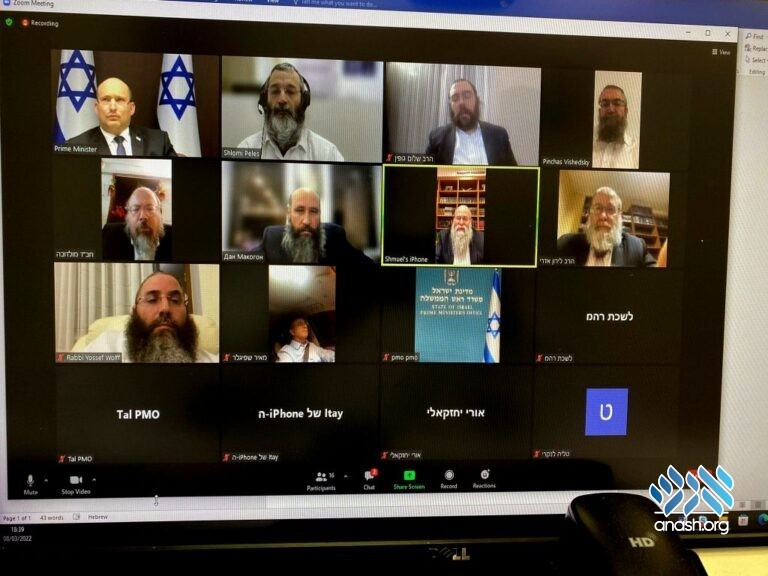 As Israel prepares for a massive surge of Ukrainian Jewish refugees, Prime Minister Naftali Bennett met via Zoom with shluchim leading the rescue of the Jews of Ukraine from inside and outside the country.

As the humanitarian crisis in Ukraine grows worse by the day and Israel prepares for a massive surge of Ukrainian Jewish refugees, Israeli Prime Minister Naftali Bennett met via Zoom with Chabad-Lubavitch rabbis leading the rescue of the Jews of Ukraine from inside and outside the country.

Chabad is the backbone of Jewish life in Ukraine, and is on the front lines of providing food, shelter and medical supplies to Jews remaining in Ukraine, as well as transporting and caring for the thousands of Jews who have left the country or are in the process of doing so..

The Chabad leaders on the call included Rabbis Sholom Gopin and Pinchas Vishedski, Ukrainian rabbis who are now working with the flow of Jewish refugees coming through Iasi, Romania; Rabbi Shmuel Kaminezki, chief rabbi of Dnipro, whose Menorah Center is at the center of Ukrainian Jewish relief efforts in eastern Ukraine and serves as a hub for incoming and outgoing Jews; Chabad Rabbi Yosef Wolff, the leader of the Jewish community of Russia-controlled Kherson; and representatives of the Chabad-affiliated Federation of Jewish Communities (FJC), which is coordinating the massive rescue and relief efforts.

Bennett, who attempted to mediate between Ukraine and Russia, and who has been on hand to greet children from the Chabad children’s home in Zhitomir, met with Chabad leaders to hear the latest on-the-ground reports directly from them and coordinate how the government can further assist their life-saving efforts.

While Chabad rabbis inside and outside Ukraine are working closely with community volunteers and local officials to ensure that people’s basic needs are met, command centers have been established in Ukraine, Israel and New York to coordinate the large-scale efforts to bring refugees to safety and send supplies to where they are needed most.

When war broke out 13 days ago, nearly 200 Chabad emissary families were leading Chabad centers in 35 cities. Within days, most of those facilities have been converted into shelters and crisis centers, as well as terminals from where 30,000 refugees have been spirited to safety—some to quiet areas in Western Ukraine, but many over the border into Moldova, Slovakia, Romania and Poland.

(Reprinted with permission from Chabab.org)