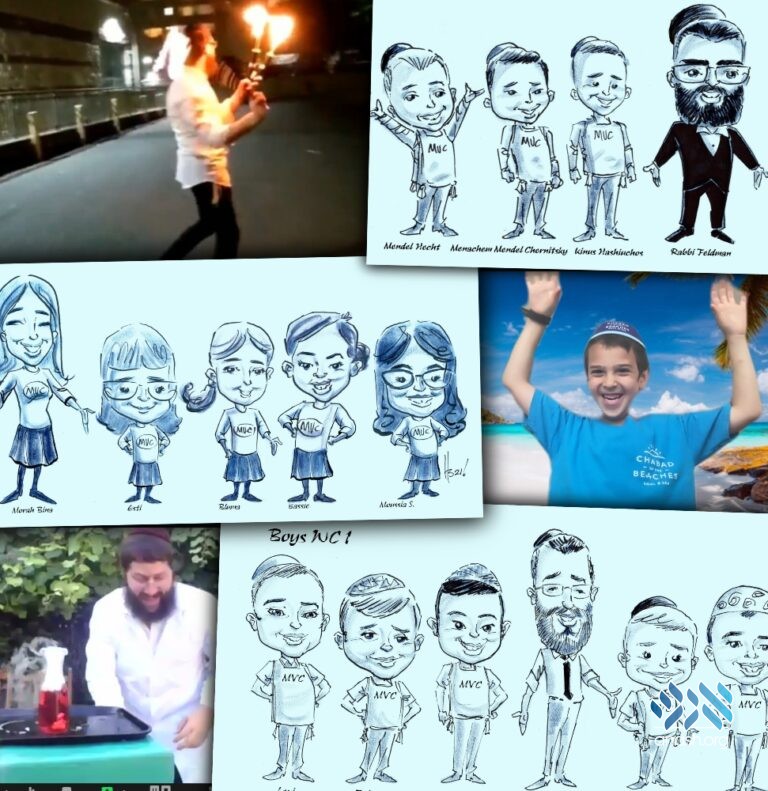 A request from shlucha in Southeast Asia at the end of last summer led MyShliach to continue the virtual summer camp, which had originally been created as a one-time response to overnight camps shutting during covid.

“We’ll give 10 minutes now for you to say goodbye to each other before we join everyone for the final activity,” Chaya told her bunk. Chana, eight years old and on shlichus in the American Midwest, turned to Mushka from Kentucky to say goodbye and share numbers so that they stay in touch. The rest of the bunk spent the time chatting, boasting about their rankings in the competitions, and promising to keep in touch. It had all the excitement and emotion that you would expect from girls’ first summer camp experience, the only thing less-than-usual—the entire camp was conducted virtually.

“We did not envision the sustainability of this program when we first launched the virtual summer camp,” Rabbi Shaya Itkin, director of MyShliach virtual summer camp, explains. “2020 was a challenging year for many of the Yaldei Hashluchim as they were quarantining or otherwise staying at home for months on end. As we were seeing the enormous boom and growth of Zoom and all things virtual, MyShliach recognized and seized the opportunity to provide for these Yaldei Hashluchim. The concept was simple: we made ourselves a goal to impart the very structure, social fulfillment and excitement of a summer camp directly to these Yaldei Hashluchim all without ever leaving their homes.”

Rabbi Itkin recalls the tremendous amount of feedback he received after the camp session was over. “Our inboxes were flooding with messages from grateful parents—and a few campers who had access to email as well. The overwhelming message was that the camp had truly lifted the camper’s spirits and how much their children had learned and gained, and the long-distance friendships these Yaldei Hashluchim made, many of which continued long past the summer.”

It was one particular email, though, from a Shlucha in Southeast Asia that created the most waves at MyShliach headquarters and set the ball rolling for years to come. She related the challenges that her children go through living so far away from the nearest Shluchim family, let alone a community with friends their age. “The summer months are truly the most challenging, as the children are just itching for real friends and to be swept away in the camp spirit that I know from when I was a child.”

“This summer we experienced with our children something we’ve never had before. Sitting in the main room and hearing our daughter shouting the pesukim energetically at “line-up.” Having our son dressing up exactly like his new friend and working to set the perfect photo for the “twins” challenge. Having their infectious enthusiasm and joy seeping through the home. Even the two-year-old is constantly singing the camp cheer he learned from his siblings!”

She ended with a simple request: “Would it be at all possible to have camp again next year even if the lockdowns are lifted?”

Rabbi Itkin and the devoted staff at MyShliach took her words to heart. They posed this question to the large network of Shluchim and Shluchos: is there a need for a virtual camp to provide for Yaldei Hashluchim? The answer poured in from the remotest corners of the globe—a definitive and resounding Yes!

Speaking with a mother/shlucha from within the United States, “The virtual camp created such a helpful structure within the home. The boys had their lessons, activities and their friends, allowing me to know that they were happy and taken care of, and I was able to devote that time to other elements of the shlichus. Not to mention how excited my son was when winning the scooter through one of the weekly challenges!”

Reflective of a summer program well done—servicing 150 Yaldei Hashluchim for six weeks—Rabbi Itkin defers the credit to the teachers and counselors. “They are the ones with the patience, skill and enthusiasm to reach the Yaldei Hashluchim with only long-distance virtual tools. They deserve all the credit for making this idea at all possible.”

When asked what’s next: “We have to collect feedback and get to work on Yeshivas Erev, Tanya Baal Peh and all our other ongoing Myshliach programming,” he says with a smile.

“What started as a response to unusual circumstances has now become a mainstay for Shluchim families wherever remote location they may be.” explained Rabbi Mendy Kotlarsky, Executive Director of Merkos 302, which is behind Myshliach, “The hundreds of happy faces of the Yaldei Hashluchim tell it all,” added Kotlarsky with a smile.