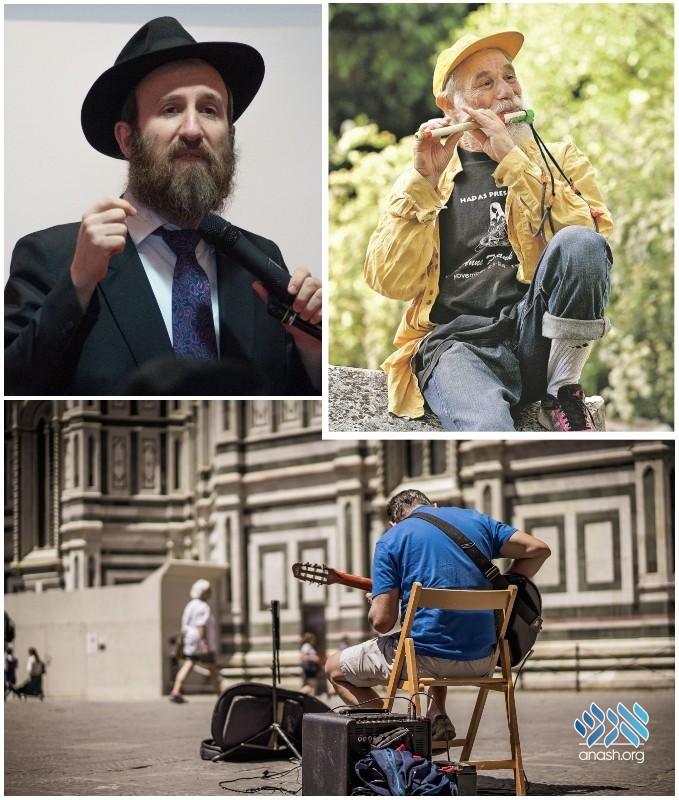 Rabbi Pini Zaklas, shliach to Zagreb, Croatia, is used to dealing with unusual situations, but he wasn’t expecting to deal with a a turf war between homeless street performers.

The Chabad House in Zagreb sees many visitors. Daniel, an American Jew, is one whom we’d come to know personally.

Born in Washington DC, Daniel left home in the seventies to see the world. Now, fifty years later, he and his flute are still traveling. When he arrives in a city, Daniel scouts out a busy street corner in the center of town and sets himself up. Sometimes his performance includes a juggling act with whistling balls, other times an assortment of self-made instruments accompany his flute. His plastic flute has been his piece de resistance during his stay in Zagreb.

In normal times, once he’s earned enough money from pedestrians, Daniel takes off in search of a new street corner in a new city. I’m not sure if it’s the coronavirus pandemic or the charm of Zagreb, but Daniel seems settled here. On Shabbat, he’s our house guest. During the week, he stops in to say kaddish for his mother, who passed away earlier this year. And when he’s not with us at Chabad, he is performing. It’s been a whole year, and Daniel and his musical performances are now a fixture on Ilica Street, not far from our Chabad House.

An optimistic soul, Daniel always wears a cheerful smile, so when I saw him a month ago, his expression told me something was off. “A street-guitarist has moved onto Ilica a few meters from me,” he lamented. Much to his consternation, the novel act was commanding the attention of passersby, and Daniel’s earnings were shrinking. I listened to him, not sure how I might help him out of his dilemma.

Late one evening, I got a call from a guy who introduced himself as Roberto. His father had passed away abroad. I invited him to come by in the morning to perform the mourning rites and recite kaddish. Morning came, and I helped Roberto do the ritual of kria’h (a mourner rends their garment and wears the torn garment for the week of shiva) and then lay tefillin. As he placed the tefillin on his head, Roberto asked me, “Are you mad at me, Rabbi?” My mind began to race through possibilities, “Why would I be mad at this stranger?”

“When you pass me playing my guitar on Ilica Street, you don’t say hi,” Roberto explained. And then it occurred to him: “Oh, Rabbi, you don’t recognize me!” I didn’t. “You came to visit me in jail twelve years ago,” Roberto said. “You brought matzah and books.”

I remembered. It was 2008, a day before Passover, when I received an urgent call from my colleague in Caracas, Venezuela, Rabbi Yehoshua Rosenblum. A Venezuelan expat found himself jailed in the city of Split, in southeast Croatia. Would I visit him before the Holiday began?

I made the four-hour drive from Zagreb to the prison facility in Split. The Jewish inmate sat huddled in the cell that he shared with three others. We talked for a little while, and I gave him the matzah and Jewish books that I’d brought. I hoped that, in some way, I had lifted his spirits in those wretched surroundings. Then I drove back to Zagreb to finish preparations for Passover.

Years passed, and I’d forgotten about this. But Roberto hadn’t. And now, here he was, saying kaddish for his dad. And then I connected the dots: Roberto is the street-guitar player, Daniel’s contender!

As I continued speaking to Roberto, Daniel walked in, as usual, to recite the mourner’s kaddish for his mom. Seeing his rival in the Chabad House talking to me, his jaw dropped.

When the prayers ended, I invited Daniel and Roberto to sit down together. I knew that I had to find a way to make peace between these two men, each one saying kaddish for a parent, both of whose lives had intersected on my doorstep.

After some conversation, we arrived at an amicable resolution, and Roberto and Daniel accepted the terms: separate times for respective solo street performances, set times for duets when both would perform together, and a socially-distance concert at Chabad featuring them together.

By the time we were done and Daniel and Roberto left the Chabad House, they had their arms around each other’s shoulders, comrades in music on the streets of Zagreb.